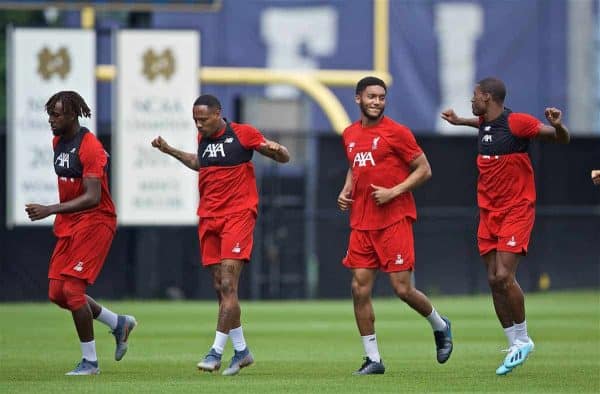 Liverpool underwent an open training session at the Notre Dame Stadium on Thursday in preparation for the first big test of pre-season, a friendly against Borussia Dortmund.

Jurgen Klopp and Jordan Henderson were involved in press conference duties before the training session, which was somewhat delayed due to weather.

Once it cleared up, though, the Reds got down to business in a spectacular setting, one of the most noteworthy sporting arenas in the United States.

Klopp and his coaches led the players through a short meeting, before the usual warm-up drills began.

While most of the players on tour have been in place for the entirety of pre-season, five players only returned at the weekend.

There might have been rainfall before the session, but it was clear that conditions remained extremely warm and the players were feeling the heat.

After the warm-up routines, players started to show their talents to both the coaches in attendance and the watching fans, who were suitably impressed at times.

Simon Mignolet‘s footwork caught the eye—and as the only senior ‘keeper on tour, his handling will get the chance to do the same against the German side.

A few of the seniors who played the domestic friendlies will by now looking to step up their intensity and rhythm, staking their claim for a place in the team once the season gets underway.

There remain opportunities for youngsters to step up, though, meaning the likes of Harry Wilson, Ryan Kent, Ben Woodburn, Curtis Jones and Rhian Brewster all need to show that they are at the same level as their senior team-mates.

That goes for both training sessions and the matches ahead, against seasoned European opponents in Dortmund, followed by Sevilla and Sporting.

An intense session 24 hours before a fixture is of course not normal practice, but the heavy training exercises plus games will help get the players ready for the non-stop nature once the season starts.

The game against Dortmund takes place at 1am BST—that’s Friday night/Saturday morning—and we’ll have live coverage and reaction of the game here on This Is Anfield.

Liverpool squad on US tour