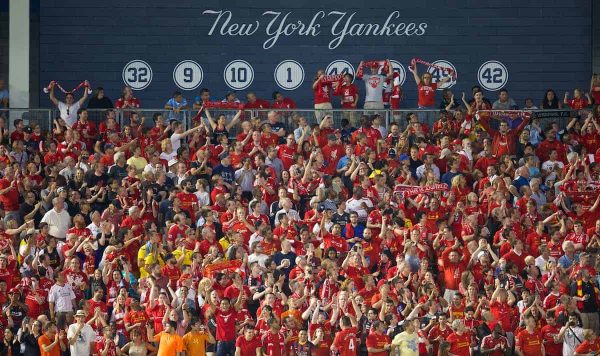 Liverpool end their pre-season tour of the United States with arguably their most low-profile game, as they take on Sporting CP at New York’s Yankee Stadium.

The Reds have suffered back-to-back losses so far in the US, with defeat to both Dortmund and Sevilla, but it has remained a productive trip on and off the pitch.

Connecting with the American fans and building fitness, Liverpool can head into this final instalment with positivity, ahead of two more friendlies back in Europe.

Sporting finished third in the Portuguese Primeira Liga last season, and under Marcel Keizer will be aiming to challenge Porto and Benfica for the title this time out.

Liverpool fly to New York on Tuesday night, with their stay in the city brief, but hopefully it will end with a victory to close off their time in the States.

Jurgen Klopp‘s squad on Wednesday is likely to be very similar to that from the 2-1 loss to Sevilla at Fenway Park on Sunday evening.

The key absentee, however, is Yasser Larouci, who should miss out after a shocking challenge from Joris Gnagnon left the 18-year-old needing to be stretchered off, leaving the Boston stadium on crutches.

Signs are optimistic that it won’t be a long-term injury, but it is highly likely Larouci won’t be risked for this friendly.

Another who may miss out is Adam Lallana, who has sat out both games from the tour so far with a dead leg, though the England midfielder may return to the fold in time to feature; similar for Nathaniel Clyne.

Bobby Duncan recovered from a foot injury to come off the bench against Sevilla, and can take a more prominent role in New York.

But Harry Wilson took an elbow to the face in Boston and, suffering with eye and jaw problems, is a doubt.

Klopp may use this game to provide some of his key players their first full 90 minutes of the summer, with Joe Gomez, Alex Oxlade-Chamberlain and Fabinho among those to have been fit and available since day one of pre-season.

Those who returned later, including Virgil van Dijk, Andy Robertson and Trent Alexander-Arnold, could come in for increased game time.

There is still uncertainty over whether Sepp van den Berg will received international clearance from FIFA in time to play, with the Dutchman currently in limbo following his £1.3 million move from PEC Zwolle.

Keizer’s Sporting have bolstered their ranks as they aim to challenge in Primeira Liga in the Dutchman’s second season in charge.

Among those brought in his Rafa Camacho, who left Liverpool in a deal worth an initial £7 million after turning down the offer of a new contract at Anfield, and the 19-year-old has taken up a place in the first-team squad.

Luciano Vietto has also joined from Atletico Madrid, along with Dijon’s Valentin Rosier and Internacional’s Eduardo Henrique, while Luis Neto arrives on a free transfer from Zenit Saint-Petersburg.

There are question marks over the future of Sporting star player, however, with Bruno Fernandes touted with a big-money departure this summer.

Liverpool are among the clubs linked with the goalscoring midfielder, though it is believed to be unlikely he will make the move to Merseyside.

Fernandes scored one and assisted another in Sporting’s last pre-season friendly against Club Brugge, but they are currently without a win this summer after losing that game on penalties, drawing with St Gallen and losing to Rapperswil.

Liverpool head to the home of the New York Yankees for the first time since 2014, when they beat Man City on penalties after a 2-2 draw in the International Champions Cup.

Only Simon Mignolet and Jordan Henderson are still at the club from those who featured that day, though Coates played 76 minutes for the Reds before heading to Sunderland on loan.

That was the only visit to the current Yankee Stadium in Liverpool’s history, though they took on Young Boys at the old ground back in 1953.

The stadium holds 50,960, but that drops to 49,653 for football games—which is significantly bigger than Fenway Park.

This Is Anfield’s Henry Jackson will be providing coverage in our matchday liveblog, with Jack Lusby reporting from Yankee Stadium.

Stay tuned to This Is Anfield on Sunday for team news, updates and more ahead of kickoff.