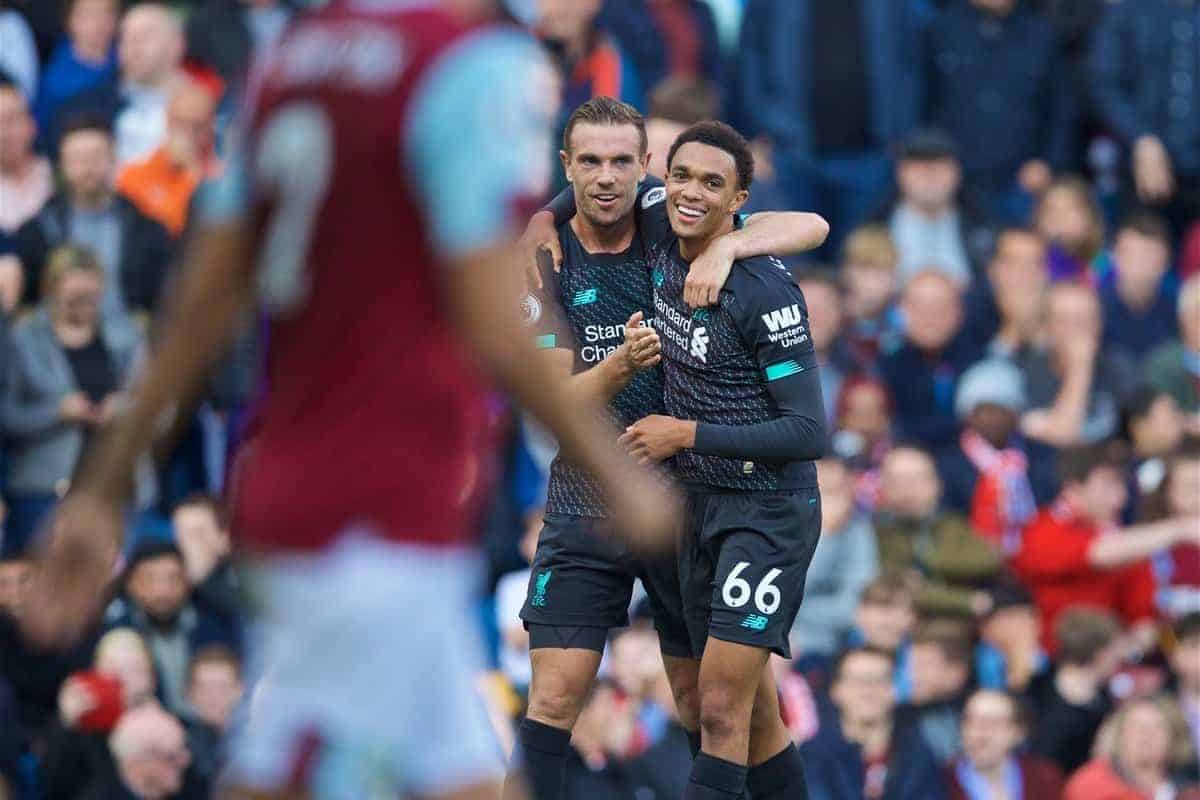 Liverpool secured a record-breaking 13th straight league win with a 3-0 victory over Burnley, and fans were duly delighted.

The Reds made the short trip to Turf Moor for their fourth league game of the season where it ended with Jurgen Klopp‘s side heading into the international break undefeated.

Burnley proved a tough outfit to break down in the initial stages before two goals in quick succession put Liverpool in the ascendency heading into the break.

Trent Alexander-Arnold reaped some good fortune as his intended delivery into the box instead found the back of the net thanks to a deflection, with Sadio Mane doubling the lead moments later as the Reds punished the home side for carelessly giving the ball away.

Liverpool went on to dominate proceedings in the second half with Roberto Firmino adding the finishing touches on a clinical performance.

Firmino couldn't have released that pass at a better time or with a better weight. woof.

“Worked on it with our deflection coach, the newest addition to the staff.”

The weight on that delayed assist from Firmino, oh my. Some player. #LFC

30 – Since the start of last season, no Liverpool player has scored more goals in all competitions than Sadio Mane (30 – level with Mo Salah). Relentless. pic.twitter.com/chni7Fr20E

Imagine having the footballing intelligence of Bobby Firmino. Stunning player.

Wijnaldum has quietly been good. I suspect he’s doing exactly what Klopp asked him to do

“Hendo is getting better and better than last year.”

Fabinho’s mix of technical ability, aggression and go, go gadget legs are crucial in games like this. The guys phenomenal.

“Fabinho and VVD have been majestic today.”

Safe to say Mane is absolute livid at Salah for not passing to him that time.

Mane 100% has the right to be angry, Salah could have slipped him in for a tap in twice. #LFC

You want your attackers to be greedy for goals. Liverpool’s front three work brilliantly as a unit and create loads for each other. Sometimes Mané takes the selfish option, and today it was Salah who was chasing a goal and made the wrong decision. They’ll sort it out.

Don't need that from Mane. He has every right to be annoyed, but keep that kind of thing for the dressing room. That will just generate headlines.

On Salah, he can play unselfishly in games. Issue for me is once he decides he's gonna shoot he ignores absolutely everything, including if others are suddenly in better positions and he's run into a dead-end. It's a problem, but he adds so much quality too.

But his selfishness is”becoming a problem”

A professional and clinical performance from the Reds which extends the unbeaten streak. But for me the clean sheet is a massive plus for me today. Excellent work all around.

“Clean sheet finally, and at a tough place. 4/4 more of the same please!”

The ease in which Liverpool are doing the business of late is ridiculous, clean sheet massive today an all

Thought Adrian had a good game today. Made a number of strong saves and will be delighted to get a clean sheet.

There was one team in Klopp's tenure against whom he'd played more than twice and never kept a clean sheet.

LFC were also closing in their longest streak in the PL without a clean sheet under Klopp.

Excellent performance. The most comfortable we have ever been at Turf Moore. Perfect start to the season.

Such a mature, accomplished performance. Not often a team goes to Turf Moor and makes it look like a walk in the park but that’s exactly what Liverpool did today. Great to get the clean sheet too.

13 wins in a row, first clean sheet, Bobby the greatest Brazilian to play in the Premier League and Liverpool top of the league – I love you Liverpool, I do!

The strong start to the season continues with a fourth win. Liverpool is holding steady at the top of the table. #burliv #ynwa pic.twitter.com/FLDKq5LfFd

New club record, 13 wins in a row. And never even really troubled, despite Burnley's shithousery and ref's inability to spot a foul

That might be the most mature performance we've ever had at Turf Moor. Well done boys.

New club record for @LFC with 13 consecutive @premierleague wins! And finally a clean sheet against Burnley (they have managed to score against us for the last few matches). Top of the league… 100% for the first 4 rounds. Only team not to have dropped points. Well in! #lfc