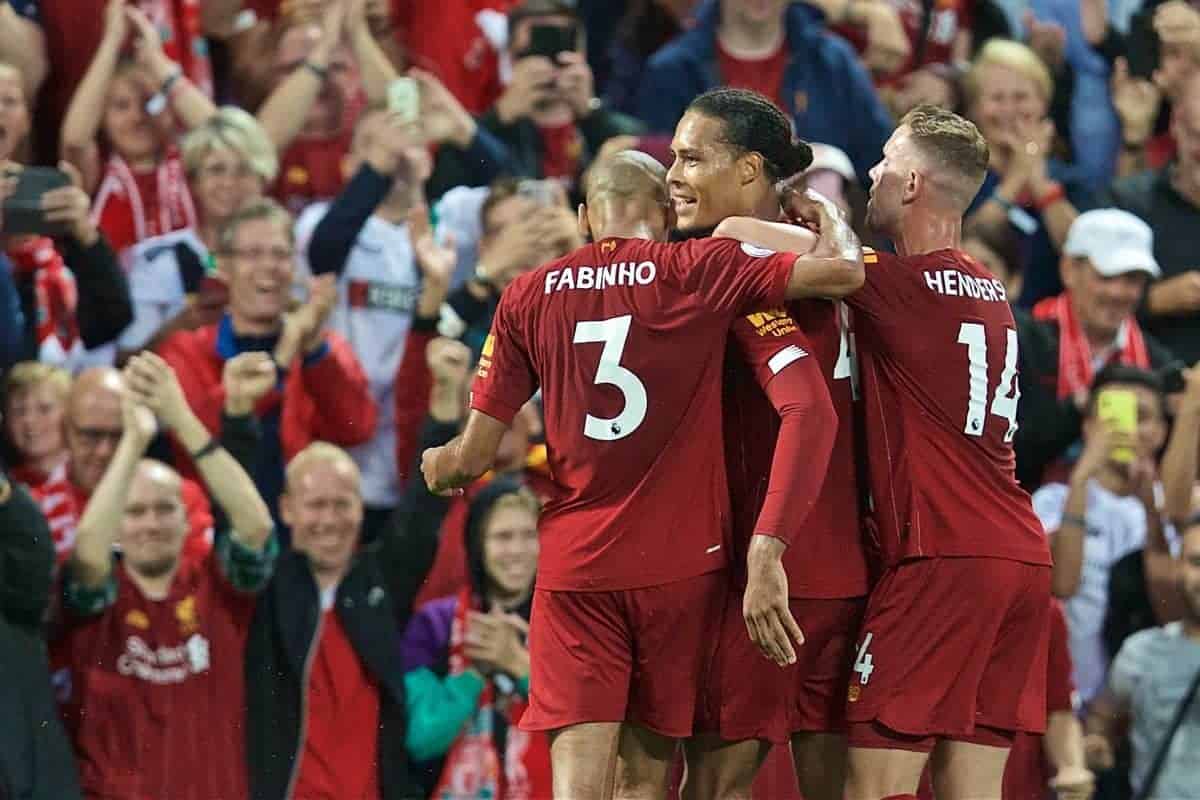 Liverpool players were thrilled to kickstart their season with three points after cruising to a comfortable 4-1 win over the newly-promoted Norwich at Anfield.

The Reds started the 2019/20 Premier League season on a winning note after easing to a 4-1 win over Norwich at Anfield.

A dominant first-half display saw Liverpool pile on four unanswered goals with Mohamed Salah, Virgil van Dijk and Divock Origi each finding the net after Grant Hanley turned the ball into his own goal just seven minutes in.

But after showing signs of defensive vulnerability throughout, the Canaries capitalised in the second term to deny the first clean sheet of the campaign.

And while positive foundations have been laid for the season ahead after collecting three points, the night was marred by a calf injury to Alisson who is set to undergo a scan to determine the extent of the damage.

For Jordan Henderson, the Reds ought to be “delighted” with a victory on the opening day, but it does not mean they are without the need for improvement after being guilty of “sloppy” play at Anfield.

Speaking to LFCTV following the game, the skipper was quick to insist Liverpool will look to use the lessons against Norwich to improve as he and his teammates continue to search for continued success:

“It was important that we put on a good performance and got a good result; the first game of the season is never easy, so we’ve got to be delighted overall with the result and the performance.

“But there is still a lot of improvement to do going forward so that’s important for us as well.

“We just want to concentrate on performance levels and consistency, we want to improve all the time as players.

“We’re a very hungry set of lads that want to improve all the time and want more success, so we’ve just got to keep continuing to work hard and keep doing the right things and keep putting in good performances.

“It wasn’t so much defensively; we gave the ball away and we were sloppy at times. We didn’t control the game with the ball so in transition we weren’t in great positions so that’s one thing we can improve on, of course.

“But first game of the season there is going to be things that we need to improve on and work on and that’s only a positive for us, we’ll learn from tonight and want to improve in the next game.”

Following the game a number of Reds took to Instagram to celebrate the victory, with Trent Alexander-Arnold and Henderson both expressing their delight at being “back to business” at Anfield:

Back at Anfield. Back with a win. ? #YNWA

Similarly, Andy Robertson and Fabinho lauded a “good start” as they shared their gratitude for the Anfield faithful:

AND WE ARE BACK! Great to be back at anfield and get off to a good start! #YNWA

Sadio Mane and James Milner, who both made cameos late in the piece, celebrated the victory while the club’s vice-captain also has his fingers crossed for Alisson:

It was all about the team for Firmino, while Gini Wijnaldum shared his joy at starting the new campaign with “three points in the pocket”:

Good way to kick off the new @premierleague season, Reds! ?? 4 goals and our first 3 points in the pocket.??? #LFC #LIVNOR

And for Van Dijk, the game provided “the perfect platform to build on” as he cast his eye towards the next challenge which lies in wait for the Reds:

The @premierleague is back!! ? 3 big points to the start the season with! Lots to continue to work on but we have a great platform to build on now. See you all in Istanbul! ?

Jurgen Klopp and his side will now travel to Turkey to take on Chelsea in the UEFA Super Cup on Wednesday before making the trip to Southampton on Saturday in the second league outing of the season.