Liverpool meet Southampton in their first away trip of the league season, and here are the best facts and stats ahead of meeting at St Mary’s.

In the Premiership the sides have met 40 times – Liverpool winning exactly half and Southampton 10, with 10 draws.

Liverpool’s biggest ever Premier League win came against Southampton in a 7-1 victory at Anfield in January 1999.

The Reds have won the last four league clashes, for the first time in their history against the Saints – scoring 11 times and conceding once.

Liverpool have lost just once in the last 11 league meetings home and away, winning seven and drawing the other three.

There has been just one goalless draw at Southampton in 44 league meetings – in November 2016.

Only one Liverpool player has ever been sent off against Southampton – Paul Walsh at the Dell in a League Cup Semi-Final in 1987. 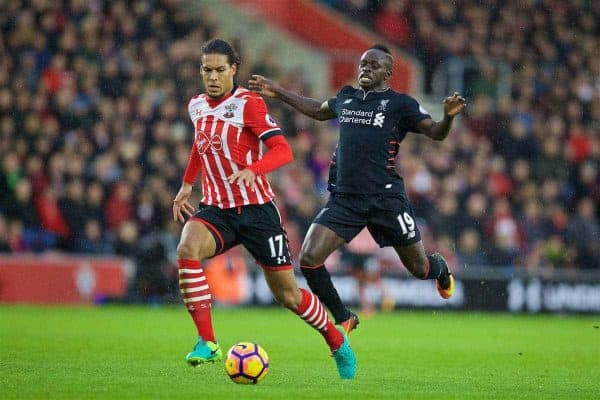 Sadio Mané scored and was sent off in the same game against Liverpool while with Southampton in Jurgen Klopp‘s first Anfield league game in charge of the Reds in a 1-1 draw in October 2015.

He played 75 times for today’s opponents scoring 25 goals, including 21 in 67 appearances in the Premier League.

Dejan Lovren made 31 appearances for Southampton in his only season at St Mary’s (2013-14) – netting twice, one of those coming at Anfield.

Alex Oxlade-Chamberlain began his career with Southampton, playing 43 times and scoring 10 goals. He was once the Saints’ second youngest ever player, and he has never scored against the Saints in 13 career appearances.

Virgil van Dijk played 80 times for Southampton from 2015-18 scoring seven times, including four in 67 league games, and he has since played in all of the Reds’ last 52 league matches.

Naby Keita was managed by current Saints boss Ralph Hasenhuttl at RB Leipzig. His goal on this ground last season saw him become the third player from Guinea to score in the league after Kamil Zayatte (Hull City) and Liverpool’s Titi Camara.

Georginio Wijnaldum‘s first goal in England came in a meeting with Southampton in a 2-2 draw with Newcastle in August 2015 – on his Premier League debut.

Divock Origi‘s first goals for Liverpool were with his hat-trick at St Mary’s in a 6-1 League Cup win in 2015 – the first Red to do so at Southampton.

Salah has scored five goals in his four Liverpool appearances against Southampton – only Robbie Fowler (8) and Michael Owen (7) found the net more times for the Reds against the Saints in the Premier League era.

Six of James Milner‘s last seven goals have been scored away from home, including all of his last five.

Jordan Henderson‘s last goal for Liverpool came last April on this ground. He could captain Liverpool for the 100th time in the Premier League.

Adrian has been sent off twice playing in the Premier League – both with his previous club West Ham – the first came on this ground in February 2015 in a goalless draw.

Records on the Line

The Reds have never scored four goals in the opening two league games of a season since they became a Football League club.

Liverpool have won each of their last 10 league games, only the seventh time they have reached double figures.

Their Premier League best is 11 set between February and April 2014, where the longest sequence in the club’s history saw them win 12 in a row in 1990 (April – October).

The Reds have lost one of their last 40 league games – at Manchester City back in January.

At least one point today will see Jurgen Klopp reach 300 points in fewer games than any other Liverpool manager in history.

This is his 146th match in charge. The current holder of the record is Kenny Dalglish who reached the landmark in 150 games.

Saints finished 16th last season having finished one place lower in 2017/18. They won nine of their 38 games, winning five in front of their home fans and only avoided the drop by five points.

Southampton have won 16 of their last 77 Premier League games.

They dropped 29 points last season after scoring the first goal of the game – 11 points more than any other team in the division.

Danny Ings and James Ward-Prowse were joint top-scorers last season in the top-flight, with all seven of Ings’ league goals coming in 2018 while Ward-Prowse’s seven came in 2019.

The only Saints player to score a hat-trick against Liverpool was Matthew Le Tissier whose tally included two penalties in a 4-2 win at the Dell in February 1994.

The Saints last lost the opening two games of a league season in 2012/13, when they were beaten in their opening four.