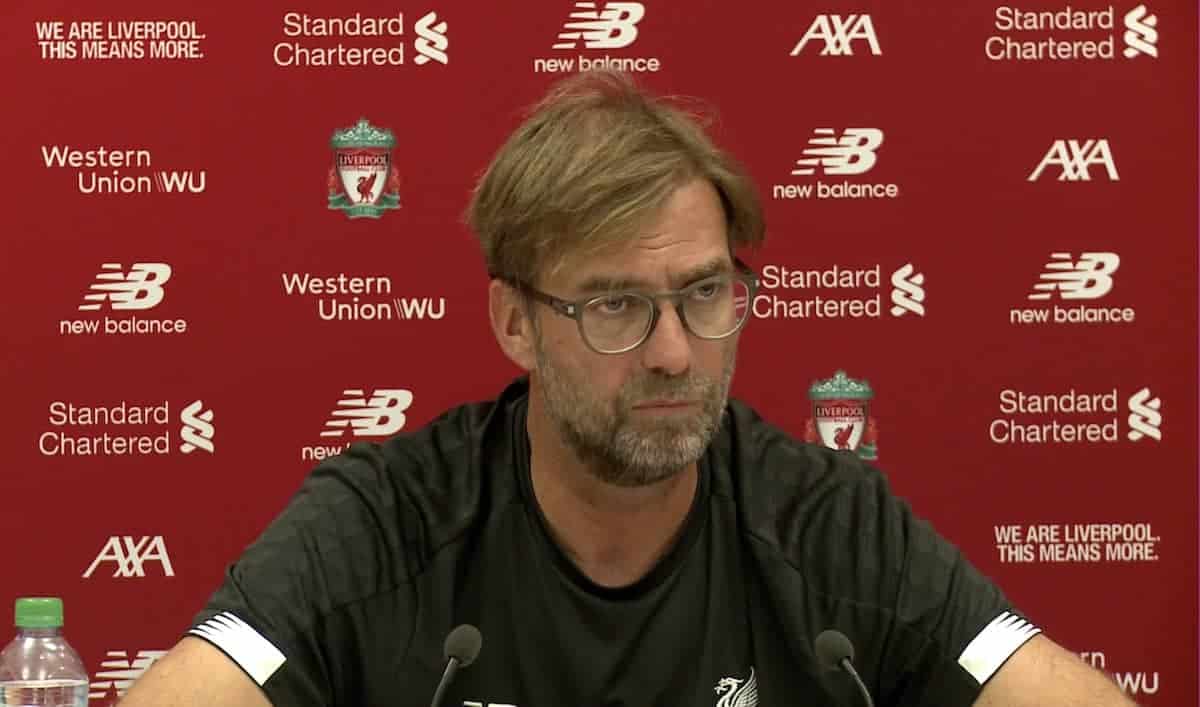 Jurgen Klopp called on Liverpool to “stay greedy” and push each other to produce their best, as his side prepare to host Arsenal in the Premier League on Saturday.

The Reds head into the weekend having won all three games so far, including two in the league, but the Gunners also boast a perfect record at this stage.

Both will harbour ambitions of a title challenge, but Liverpool do so fuelled by the triumph of last season’s Champions League success, with their winning mentality reinforced by lifting the UEFA Super Cup.

Speaking at Melwood on Friday, Klopp previewed the visit of Arsenal by discussing the notion of team spirit, and called for his squad “kick the butts of your team-mates.”

“There are different kinds of team spirit,” he explained.

“The spirit in the team could not be better in the moment, they won the Champions League last season together, and won [30 games in the league].

“If they would not be close [after that], that would be really funny.

“They’re very close, but what you need is a competitive team spirit as well, you have kick the butts of your team-mates in the right moment.

“You need a very competitive team spirit to be really difficult to beat and all that stuff.

“It’s not about wanting to have a drink together every night, it’s about doing the right things and knowing much better than others for whom you are doing it.

“For your mate, for your best friend maybe, for whatever.

“I like what Hendo said in pre-season, when he got asked about that and he said ‘yes, we will stay friends forever’, that’s how it is.

“But in the moment we have to be friends, not best friends, because best friends means that everything you do the other guy likes.

“We have to push each other, we have to be really as a team—I use the word too often probably—very angry about everything else around. We have to really stay greedy and all these things.

“We are, I’m not in doubt about that, but that’s what I mean that there are different kinds of team spirit.

“The best team spirit in the world is not helpful if it’s only about being together and stuff like this.

“We need the kind of team spirit where everybody pushes each other and that’s what we had, what we have, but we have to have it as well for the future.

“That’s not guaranteed, we have to work on that every day, and that’s what we try to do.”

It was a busy press conference in which the manager praised the Gunners’ form so far, and sets Saturday’s clash up as an engaging one.