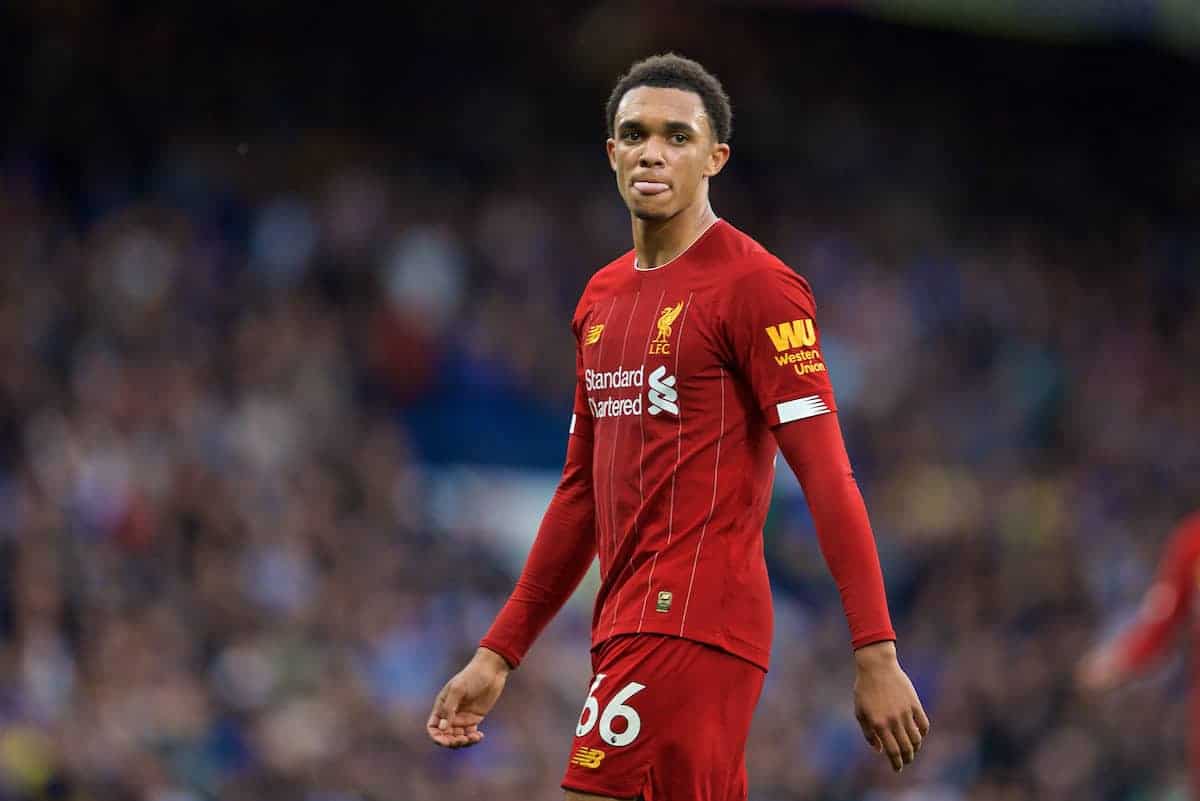 Trent Alexander-Arnold has revealed the set-pieces which handed Liverpool both of their goals to win 2-1 at Chelsea were “something we’ve been working on.”

The Reds went 2-0 up in the first half at Stamford Bridge through a free-kick from the right-back and a header from Roberto Firmino, both from similar situations.

Trent’s strike came after Mohamed Salah rolled the ball to him from the set-piece, and Firmino turned in Andy Robertson‘s cross after the No. 66’s own flick.

Speaking to Sky Sports after the game, Trent explained the thinking behind his opening goal, and elaborated on the work at Melwood that went into “executing” those.

“I think Hendo wanted that first, and then he thought it was a bit too close for him,” he said.

“I discussed with Mo to roll it and make the angle a bit better, confuse the ‘keeper a little bit, and I was able to put it away.

“Obviously it moves their formation and we react off that. If we can get a little advantage that’s what we’ll do.

“It’s something we’ve been working on and we executed them both well.”

Trent described the victory as “massive for us,” adding that “we had a setback in midweek but we bounced back and showed that we’re a really good side.”

It could have been much different had Cesar Azpilicueta’s first-half strike made it 1-1, but it was ultimately ruled out after a VAR check deemed Mason Mount offside in the buildup, which was a “mental setback” for Chelsea.

“I was on the other side, it looked onside to me and obviously [there were] a few deflections, a scruffy goal,” Trent continued.

“The VAR’s helped us out a little bit. Quite soon after we got the second goal and were able to see the half out.

“It’s a mental setback for the other team. Obviously you think you’ve scored, you’ve celebrated and got back in position, then all of a sudden your goal’s been cancelled and you’re back down to 1-0. We’ve worked it to our advantage.”

It wasn’t the prettiest of performances from Liverpool, and certainly not the most controlled, with a sloppiness in possession marring the second half and allowing N’Golo Kante to reduce the deficit.

Trent offered an explanation for this, pointing to the quality of the opposition, and lauding the landmark of 15 straight victories in the Premier League and, for this campaign, six from six so far.

“You can’t expect to come to Stamford Bridge and have it your own way,” he concluded.

“We were prepared for a tough second half, they were always going to come out fighting.

“The last 25, 30 minutes was really tough, we had to defend well. They obviously got their goal, but we were able to see it out in the end.

“Fifteen wins shows what kind of side we are. We’ve won all different kinds of games.

“Eighteen points out of 18 is good going and hopefully we’ve carry on the good form.”