Liverpool were on the end of a piece of good fortune as they secured a 1-0 win against a stubborn Sheffield United side on Saturday.

After making 11 changes in the League Cup victory in midweek, Jurgen Klopp reinstated more familiar faces for the trip to Yorkshire as the Reds pushed to extend their Premier League winning streak to 16.

Bramall Lane had not proven to be a happy hunting ground for Liverpool in the past, and as history proved it was to be nothing short of a hard-fought battle for the entire 90 minutes.

The Reds dominated possession throughout the opening term but struggled to breakdown a well-drilled Sheffield United outfit, who in-turn found joy on the counter and in their targeted attacks on the right-flank.

But Virgil van Dijk and Joel Matip proved to be instrumental figures in nullifying the Blades’ attacks.

And the former set Sadio Mane up for his first of two opportunities to steer the Reds into the lead with a raking long field pass into the area, before the winger later found the upright for what appeared to be a certain goal.

In the end it proved to be a frustrating 45 minutes for Klopp’s men who failed to test Dean Henderson, with a plethora of shots from distance finding anything but the target. 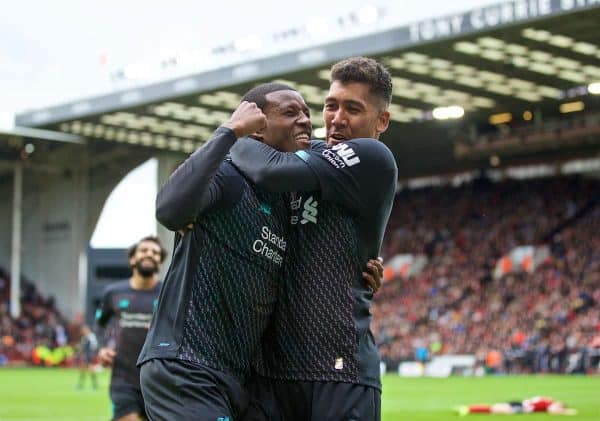 Chances again proved few and far between in the second term as the Reds found themselves guilty of playing into the Blades’ hands with a slow tempo of play.

The introduction of Divock Origi, however, later in the piece injected impetus into Liverpool’s game and paved the way for what proved to be the winner after Gini Wijnaldum‘s shot from outside the box resulted in a blunder from Henderson who saw the ball slide between his legs.

A tense and nervy finish awaited for the second Premier League game in a row as the Reds again failed to convert a number of clear cut chances.

But having held onto the lead Liverpool again sit comfortably at the top of the table after stretching their winning start to the season to seven, and 16 in the league overall.

There will be little time to pause for thought over the clash in Yorkshire as the games keep on coming for the Reds, as Champions League action is next on the agenda with the visit of Red Bull Salzburg on Wednesday, where Liverpool will be eager to secure their first points in Europe this season.