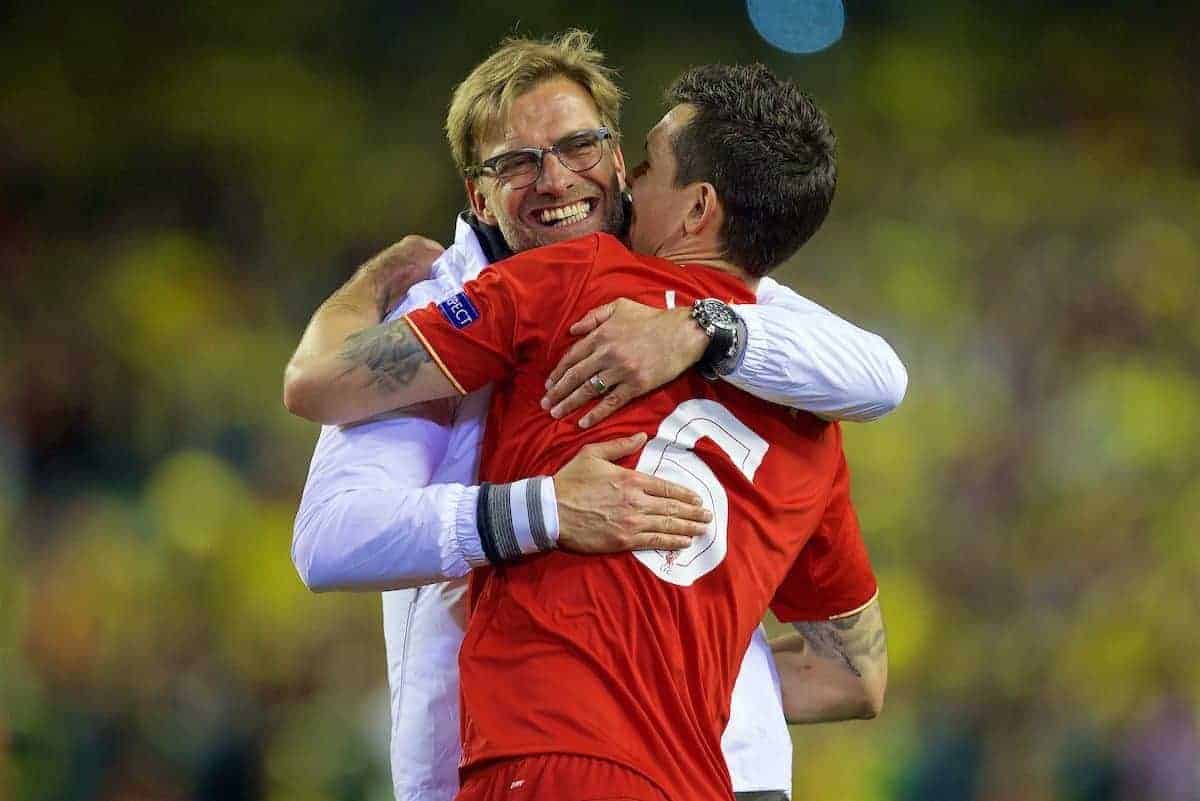 Jurgen Klopp famously pledged to turn “doubters to believers” when he arrived at Anfield and while that was directed at long-suffering fans it was a message embraced by his players.

When the German made the pronouncement at his first press conference it was viewed as a PR masterstroke.

He could not have thought, at the time, it would resonate with his squad but it did and it has stuck with those who remain after all the changes in the intervening period since 2015.

“Four years already? I’m getting old. Yes, we started to believe when he said ‘from doubters to believers’,” was defender Dejan Lovren’s assessment.

“He changed things in the club, from small details like saying ‘good morning’ to everyone to cleaning your table.

“We are, I think, raised at my age that when you see an older person you will say ‘good morning’. It is about respect.

“When you have this outside of the pitch you will feel it also on the pitch. It is the simple things.

“It is about things like the food; he brought in people who are the best in these positions, and he knows what he is doing.

“I think some part of these details are missing in some clubs.”

Klopp’s first opponents when he took over in October 2015 where Tottenham at White Hart Lane.

Fast-forward to present day and Spurs are next up, albeit at Anfield.

They last met in June’s Champions League final, where Liverpool won their sixth European Cup, but the two sides’ respective fortunes have taken different paths since then.

While Liverpool are unbeaten in the Premier League, eight wins and a draw giving them a six-point advantage over defending champions Manchester City at the top of the table.

Lovren said it shows getting to the top and staying at the top are two different things and that can be seen in how the two squads have developed since that meeting four years ago.

Of the Liverpool squad which was named for that goalless draw only Nathaniel Clyne, James Milner, Adam Lallana and Divock Origi remain at the club.

Essentially, little has altered personnel-wise at the club.

“It can change quickly. Three or four years ago we didn’t have the best start,” Lovren added.

“With the improvement, the belief, with the work of the team you can achieve anything. This is what Klopp told us.

“The most difficult part is when you are on top to stay on the top. When you sometimes drop it is about showing your inner strength, it is about the character of the team to jump back.

“I think we learned about all our mistakes from previous years. I think we are on the right path.

“[Klopp] said to us it is exceptional that we lost the final against Real Madrid and we came this year and won it, it says a lot about the team.”