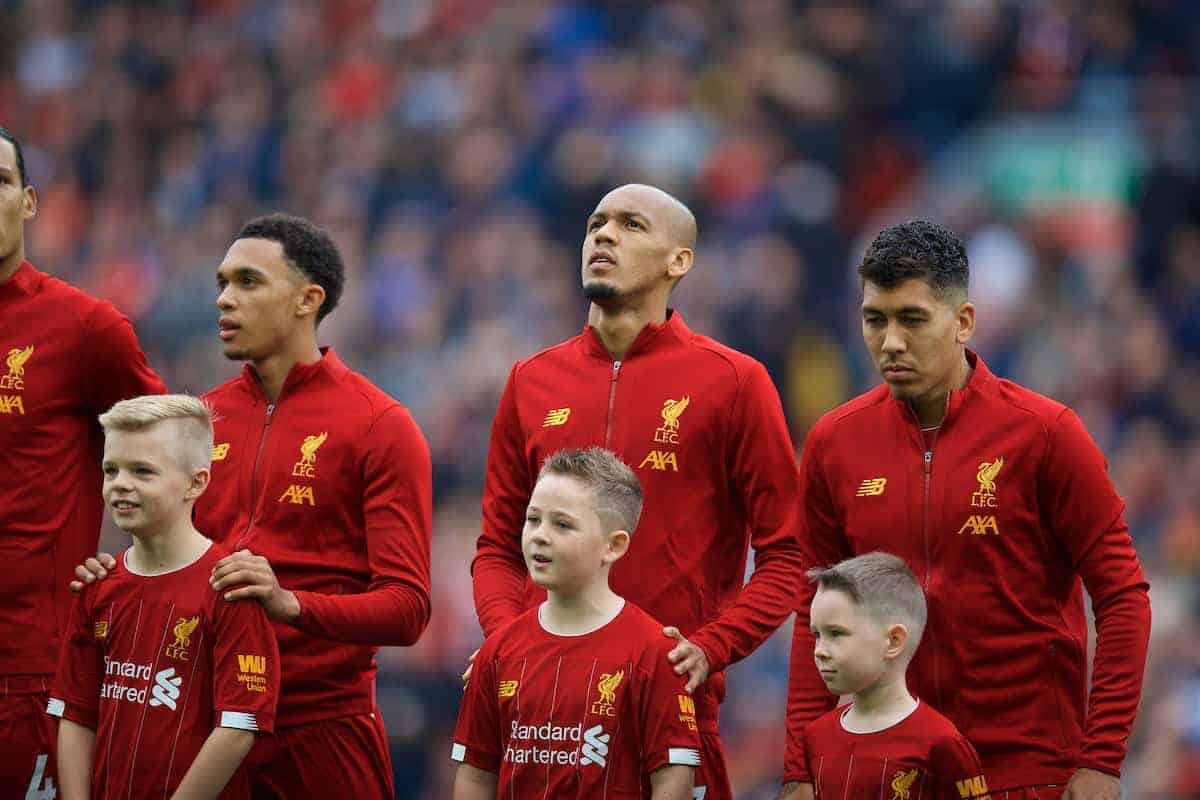 Jurgen Klopp has praised the influence of Fabinho as “incredibly important,” having initially adapted Liverpool’s system to ease in the Brazilian.

Fabinho joined the Reds from Monaco in 2018, but despite the deal being announced shortly after the Champions League final in Kyiv, his first Premier League start came in October.

It was a slow transition which the 26-year-old admitted was difficult to come to terms with, but he has remained a first-choice starter since, playing the full 90 minutes in all but one game in the league and Europe so far in 2019/20.

He is now arguably on par with the likes of Alisson, Virgil van Dijk and Roberto Firmino in terms of importance, and showed his ability in an unbalanced midfield in Wednesday’s 4-1 win at Genk.

Speaking on Fabinho‘s role at the base of his midfield, Klopp explained how this showcased his qualities, but added that “he’s not only a ‘gap-closer’.”

“It was clear it will not be perfectly tuned with Oxlade and Naby around, because they didn’t play a lot together in this formation. But it’s a possible formation, for sure,” the manager said.

“Fabby had a lot to do, to sort some little gaps which we left open in different situations.

Klopp spoke further on Fabinho‘s adjustment period, insisting it was essential to his success at Liverpool, and revealed how he initially “thought we had to change the system” to include his No. 3.

“I’m sure that the next player will sign at any time, and then is not playing from the first minute, we’ll have the same conversation like always,” he continued.

“That a player doesn’t see it like this, I can 100 percent understand. Outside, everybody’s excited and I can understand, but it’s still like this. You cannot change it.

“In the beginning I thought we had to change the system, to the ‘double six’ midfield that he was used to at Monaco.

“Now in that game [against Genk] he played as the only midfielder in some moments! So that works as well. He just needed time.

“It was his birthday, what was he, 26? Ten more proper years at least! There’s a lot to come and he can improve as well.

“That’s all good, it’s a very interesting period for him, for us, and so far he did really well.”

That Fabinho has been effectively ever-present this season—brought off the bench at Southampton in August and rested against MK Dons in September—has led to concerns over fatigue.

But while Klopp acknowledged that he would need to give the midfielder time off in the coming weeks—likely against Arsenal in the League Cup on Wednesday night—his strange role with Brazil has aided the situation.

“We can [rest him], but he only flies in the international breaks, he doesn’t play,” he joked.

“That’s pretty much how it is. He’s somewhere, but he’s not playing.

“Two others are playing both games, Gini and Hendo played both games for Holland and England; he didn’t play, so that makes a difference, obviously.

“But yes, there will be a moment when we have to think about that as well, for 100 percent.

Fabinho could, of course, be in line for an enforced break soon, as he has picked up four yellow cards in the league—one more, and he will miss the next game.