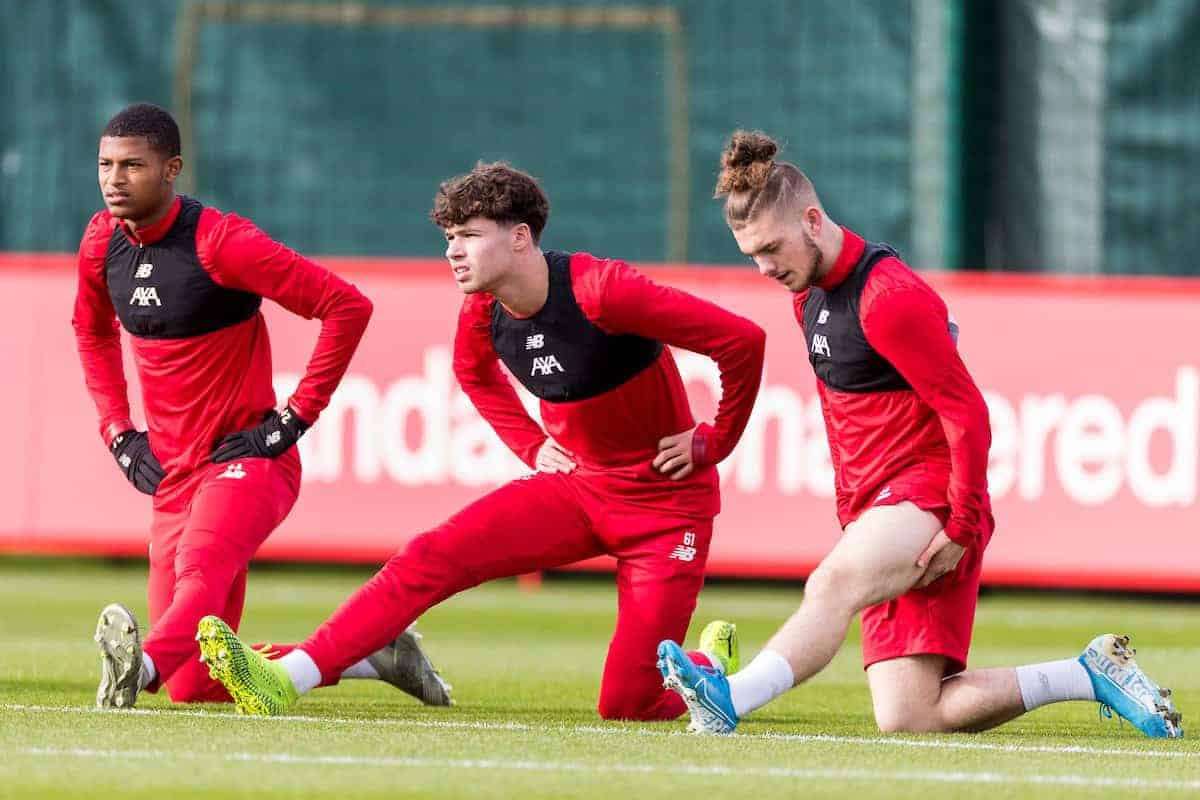 Jurgen Klopp oversaw training on Monday with a much-changed squad, as a host of youngsters are set to feature against Arsenal in the League Cup.

The Reds host their Premier League rivals in the fourth round on Wednesday night, after a 2-0 victory at MK Dons in their previous outing.

Klopp handed debuts to five players in Milton Keynes, while the likes of Ki-Jana Hoever and Curtis Jones gained further first-team experience too.

The manager could feasibly make 11 changes to the side that defeated Tottenham on Sunday, against what is likely to be a heavily rotated Arsenal outfit.

And the first session back at Melwood after the weekend’s victory indicates that the lineup could be academy dominated, with at least 11 receiving the call-up to train.

Goalkeeper Jakub Ojrzynski joined Adrian and Andy Lonergan in outdoor work with John Achterberg, though the young Pole is unlikely to feature in midweek.

Sepp van den Berg and Neco Williams have a strong chance of starting in defence, however, with Joel Matip injured, and Virgil van Dijk, Dejan Lovren and Trent Alexander-Arnold expected to be given a rest.

Van den Berg could make his full debut alongside Joe Gomez at centre-back, while Williams—who has trained regularly at Melwood of late—may be in line for a start at right-back.

Fellow defenders Yasser Larouci, Morgan Boyes and Billy Koumetio were also called up to flesh out the numbers.

In midfield, Pedro Chirivella and Herbie Kane are possibilities to start, while Leighton Clarkson could be in the squad again having warmed the bench at Stadium MK.

Both Jones and Harvey Elliott should reprise their roles in attack, while Luis Longstaff finds himself in a similar position to Clarkson.

The majority of Klopp’s senior squad were present at Melwood, with those who started on Sunday undergoing a lighter session indoors—including Mohamed Salah, who was brought off late on against Spurs due to an ankle injury.

Gomez, James Milner, Naby Keita and Divock Origi were among those also involved as the squad headed outside, and they could provide experience to Klopp’s selection.

The League Cup is clearly not a priority for Klopp this season, with a challenge for the Premier League title convincingly underway, but a positive performance should be expected against the Gunners.

Meanwhile, the under-21s visit Accrington Stanley in the EFL Trophy on Tuesday night, and like last time out Neil Critchley could field an even younger side.