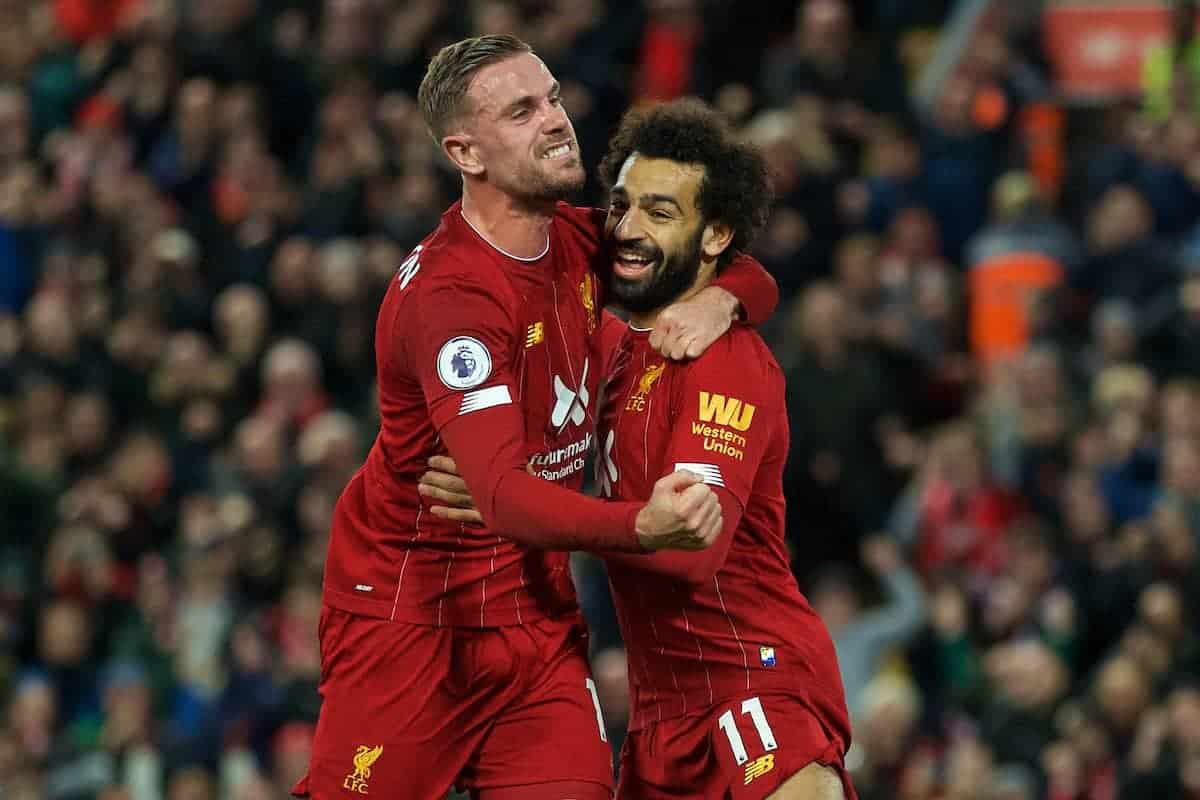 Liverpool deservedly beat Tottenham 2-1 at Anfield on Sunday, but they had to come from behind to secure a priceless win.

The Reds faced another big game in their quest for the Premier League title, as an unpredictable Spurs side made the trip to Merseyside.

It couldn’t have been a worse start for Jurgen Klopp‘s side, as Harry Kane headed in after Heung-min Son’s shot had deflected onto the post in the first minute.

Liverpool were excellent from that point on, however, even though they were still behind at half-time.

Jordan Henderson finished well to equalise in front of the Kop early in the second half, before Mohamed Salah won it from the penalty spot, following a foul by Serge Aurier on Sadio Mane.

The victory takes Liverpool back to six points clear of Man City at the top of the Premier League table.

Fans highlighted the magnitude of the win…

One of those it felt like a privilege to be there for. What a football team. At times tonight as close to perfect as it's ever decent or reasonable to expect. And when they weren't as good as that they worked it out anyway

Massive win that. Another sign of the mentality monsters striking again. They simply don't give up.

Your thoughts on the game? #LIVTOT

Great win. Played well for large spells. Dominated the game. Liverpool have had a tough first 10 fixtures. United and Chelsea away. Arsenal, Spurs and Leicester at home. 28/30 points. Awesome.

Not seen three points that deserved for a long time. Could have easily had 6 there no bother.

“Thought we were absolutely immense in this game. Fought tooth and nail for this win against a whole lot of snide fouls.”

That is a result. Massive! No backing down despite an unfortunate start. #LFC so ruthless and pressuring in attack, couldn’t have worked harder for those points. Mané superb and Henderson deserves all credit that comes his way. Wobbled at the end, but saw it through. #LFCdigest

These lads. Love them to bit, but they're horrendous for the nerves.

Another massive win and a really big performance.

So happy with that performance. ?Fabinho was immense I thought. Best player on the pitch IMO. On his day he is pure class. #YNWA #LIVTOT ?? pic.twitter.com/YwrrTyla3w

Hard fought victory today but more than deserved!! We pressed at every opportunity and created enough chances to win 2 games and the Spurs GK was brilliant to be fair. Some excellent performances from Sadio, Trent, Robbo and Bobby but Fabinho my man of the match today ?#LFC

“Fabinho is awesome, my MOTM by a country mile.”

Fabinho is instrumental to this Liverpool side, both offensively and defensively. Calm on the ball, a persistent presser and able to creative and carve out chances for those ahead of him. Really strong second half in particular.

Another massive win for #LFC – never seen a side so adept at responding to setbacks and refusing to let it be 'one of those days'. Fabinho utterly colossal and that's a huge goal from Jordan Henderson, who hasn't been at his best lately but ran himself into the ground.

Fabinho MOTM. What a player.

Others also earned credit for their showings…

So @trentaa98 creates 7 chances in the game, more than the rest of #lfc's team combined and still doesn't get Man of the Match? Wowser.

He was fucking fantastic, what a player… we are very, very lucky to have him for another 10 years or so. Brilliant. Great win.

“Sadio MOTM for me, he was immense. Anyone who writes off Hendo needs to have a talk with themselves.”

– hugo the horrible on the forums.

Trent deserves huge credit in particular as well. A couple of ropey moments defensively (although Spurs did target him and Lovren), but the quality of his passing was just outrageous. At times it's as if he's almost dictating games from right-back.

Credit to the lads, especially Henderson, after being absolutely dreadful first half he came back well, scored and stuck to the task.

Fortress Anfield was lauded after the final whistle…

That result means Liverpool have lost just one of their last 49 games in the Premier League, winning all of their last 12 league games at Anfield.. #LIVTOT

The Fortress of Anfield holds against Tottenham, with another three points for Liverpool. Six points clear at the top of the table after 10 matches. #LIVTOT #lfc pic.twitter.com/aHrl39vg06

Unbeaten at Anfield in 45 games.

10 – Liverpool are unbeaten in their last 10 Premier League games when conceding the first goal at Anfield (W7 D3), winning each of the last six. Fortitude. #LIVTOT pic.twitter.com/AgGCV6E8PS