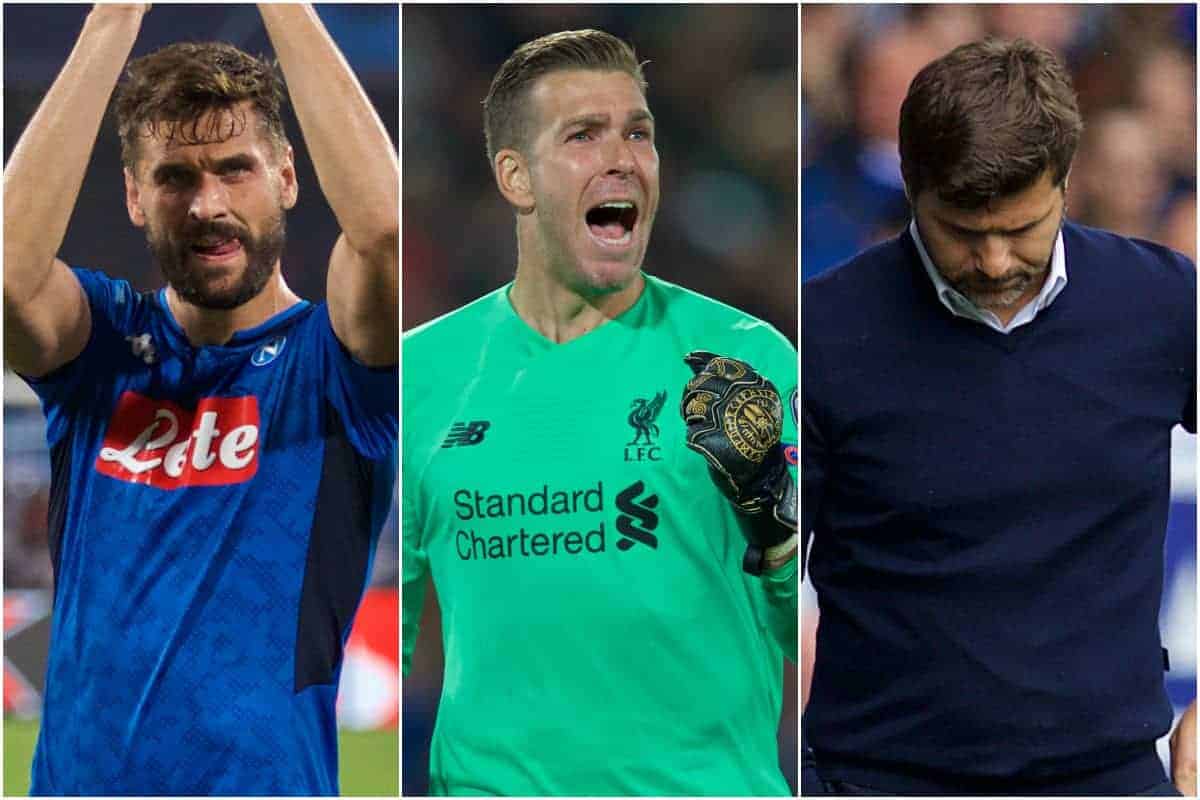 Genk’s valiant display at home to Napoli allowed Liverpool firmly back in the race in Group E, as the Champions League saw a host of big names slip up again.

The Reds made life difficult for themselves at Anfield, as an expected procession at 3-0 up crumbled as goals from Sadio Mane, Andy Robertson and Mohamed Salah were cancelled out.

But a change in formation saw Jurgen Klopp‘s side triumphant, as Salah struck a second-half winner to earn three points for the champions of Europe.

And with the victors in Liverpool’s group stage opener, Napoli, unsuccessful on the road as they drew 0-0 at Genk, the landscape of Group E has shifted.

Klopp’s side are now level on points with Salzburg and just one behind Napoli, with a double-header against Genk coming up—first at the Luminus Arena (Oct 23), and then back at Anfield (Nov 5).

Win both of those and Liverpool could well top their group before hosting Carlo Ancelotti’s side in a likely decisive clash on November 27.

Elsewhere in the Champions League, the Reds’ opponents in the past two finals, Real Madrid and Tottenham, continued their miserable start to the continental campaign.

Real went two goals down at home to Simon Mignolet‘s Club Brugge, but were able to claw back for a 2-2 draw, while Spurs suffered a humiliating 7-2 defeat at home to Bayern Munich.

Both can still harbour hopes of progressing to the last 16, with their groups remaining open as Paris Saint-Germain and Bayern top them respectively and few points shared between the rest.

Atalanta, Bayer Leverkusen, Benfica and Lille can already be considered in trouble, however, left with no points after two games.

Lille fell to a 2-1 loss to Chelsea in Group H, Benfica foot Group G having lost 3-1 to Zenit Saint Petersburg, Leverkusen’s 3-0 loss to Juventus leaves them pointless in Group D and Atalanta are bottom of Group C after losing 2-1 to Shakhtar.

Man City are comfortably top of that group, with a decidedly quiet Etihad playing host to a 2-0 victory over Dinamo Zagreb on Tuesday night.

Pep Guardiola’s side were without Kevin De Bruyne, but his injury is not expected to be long term.

Ajax’s excellent form continued with a second consecutive 3-0 win, this time over Valencia, while Barcelona sealed a morale-boosting 2-1 comeback win over Inter Milan at the Nou Camp.

Few conclusions can be drawn after just two rounds of group games, but while Liverpool, City and Chelsea are all in the running, it appears Spurs are the most likely of the English sides to fall at the first hurdle.