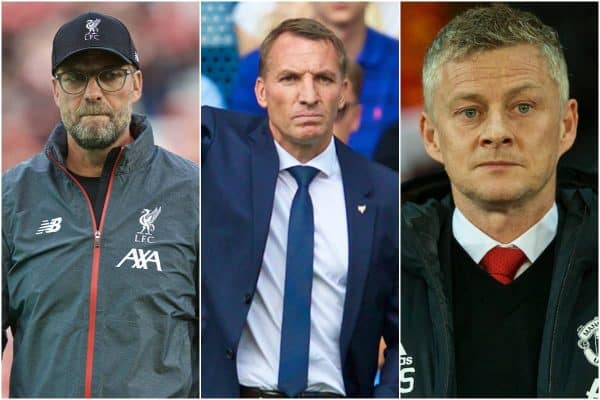 Brendan Rodgers is back at Anfield as Liverpool host Leicester in the pick of this weekend’s Premier League fixtures.

Manchester United head to Newcastle, while Tottenham will be looking to recover from their 7-2 humiliation against Bayern Munich with a trip to Brighton.

Brendan’s Back at Liverpool

Brendan Rodgers returns to Anfield for the first time since he was sacked as Liverpool manager in 2015.

Rodgers will arrive at his former club armed with a Leicester side capable of ending Liverpool’s perfect start.

Jurgen Klopp’s team have registered seven wins from as many matches this season, but the visiting Foxes will pose a real threat to their 100 percent record.

Rodgers has got the former Premier League champions firing on all cylinders and in Jamie Vardy and the impressive James Maddison, they have the firepower to test Liverpool’s defensive insecurities.

There was a time when Manchester United and Newcastle were engaged in battling for top-flight honours.

But ahead of Saturday’s fixture at St James’ Park, it is a case of how the mighty have fallen.

Ole Gunnar Solskjaer is under mounting pressure following United’s indifferent start to the campaign, which this week has seen them record a drab stalemate against Arsenal and a turgid goalless draw at AZ Alkmaar in the Europa League.

Steve Bruce is also in the firing line following last week’s 5-0 thrashing at Leicester, with Newcastle second from bottom.

A defeat for either manager will heighten their vulnerability.

Mauricio Pochettino’s Tottenham side became the first English team to ship seven goals at home in the Champions League in their humiliating 7-2 defeat against Bayern Munich.

They will have the chance to bounce back from their resounding defeat in the weekend’s first fixture, an away trip to Brighton.

The Seagulls are winless in their last six matches, having drawn three times and suffered three defeats since their opening-day win against Watford.

But Spurs, who also have little to shout about in terms of their recent form, are without a win in their last nine league matches on the road.

Whisper it quietly, but West Ham are fifth in the Premier League table.

Of course, the season is only seven matches old, but Manuel Pellegrini will be pleased with his team’s start.

Up next for the Hammers is an all-capital affair against Crystal Palace, who themselves can be happy with their encouraging early-season form.

West Ham have looked good at the back, shipping just four goals in the six games since losing 5-0 to Manchester City on the opening day, and might well think they have too much to offer in attack not to maintain their good start.

Watford Desperate to Stop the Rot

The same cannot be said at Vicarage Road following a miserable period for Watford.

The Hornets have turned to former manager Quique Sanchez Flores to save their season but following a decent start—a 2-2 draw against Arsenal—Watford then lost 8-0 and 2-0 to Manchester City and Wolves respectively.

Watford must open their winning account against Sheffield United on Saturday or face being cast adrift.

The Blades, however, will not be a pushover after providing a stern test for Liverpool last time out.