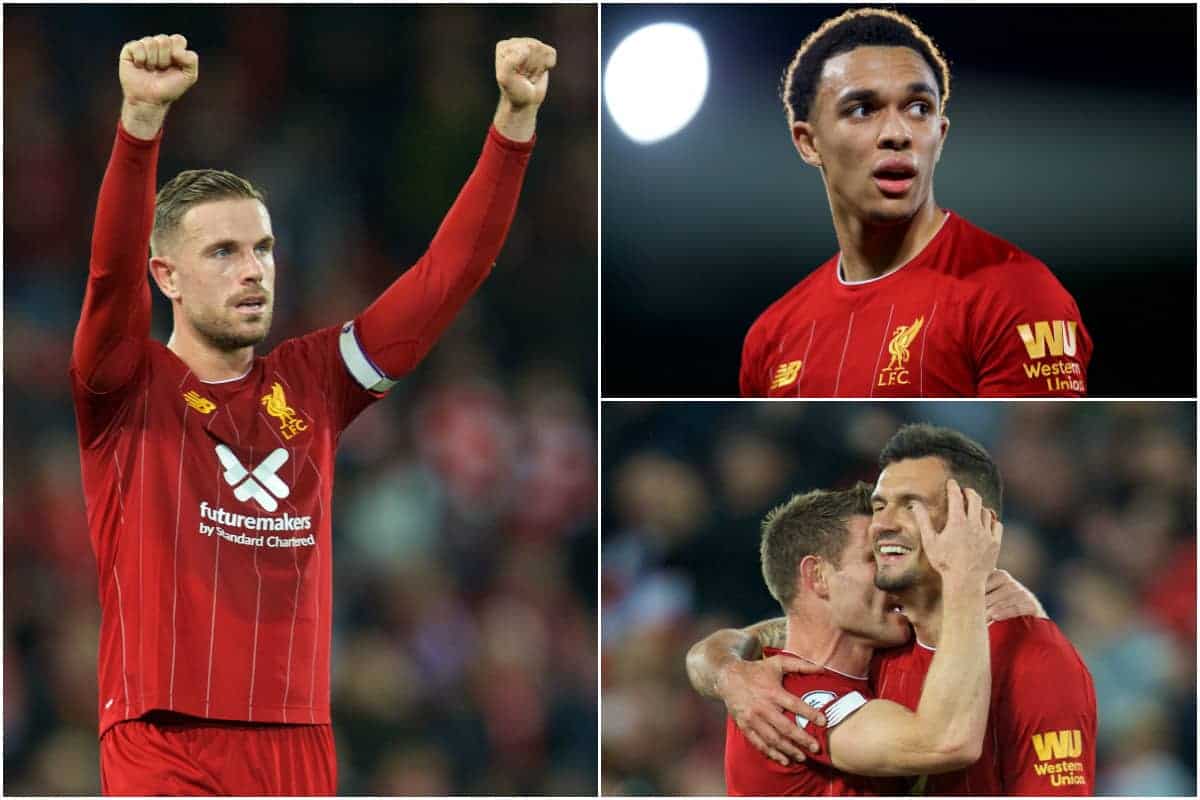 Few negatives can be taken Liverpool’s suffocating 2-1 win over Tottenham, but there were some contrasting displays in their ninth league victory.

The Reds kept their six-point lead over Man City after coming from behind to triumph over the struggling Spurs.

Harry Kane’s first-minute header was cancelled out by Jordan Henderson‘s far-post strike in the second half, with Mohamed Salah then stepping up to win the game from the spot.

It was a performance that prompted considerable praise from Jurgen Klopp, who described it as a “super game,” and one which further reinforces Liverpool’s title credentials.

With the visit of City fast approaching, this was a revealing display.

BRETT: Fabinho. Stats don’t always tell the full story when it comes to eye-catching defensive juggernauts like the Brazilian, but his tackles, interceptions, key passes and long passes are all improved on last season.

This was on full display against Tottenham within a monstrous performance; time and again—11 times, to be precise—his Go Go Gadget legs regained possession to get Liverpool back on the front foot.

His growing influence on the side shows no sign of slowing down and, boy, are the Reds benefiting from it.

Shout out to the crowd, too, who were magnificent.

In this age of statistical analysis, that unquantifiable lift it visibly gives the players can go under the radar.

DAVID: The result was never in doubt. Even going in at half-time I felt Liverpool would still win.

Once the shock of the early goal had worn off (around the 20-minute mark) they took complete control and dominated until the lead was finally taken.

Between the 27th and 31st minute Liverpool created six decent chances. From then on it was just a matter of time. Patience has been our virtue this season.

The range of passing he displayed was otherworldly. His accurate crossing gains most plaudits but his booming switches of play over to Robbo are worth equal mention.

It’s those passes switching the point of our attack that force teams to shift defensively and can take their toll on their legs later in the game.

On this form Trent is the best right-back in world football.

MATT: Where to begin? This team is absolutely phenomenal. They’re performing at unprecedented levels in the history of Liverpool FC and I think it’s being a bit overlooked.

Yet another show of mentality, yet another hurdle overcome. Nine wins from the 10 opening league games. These players deserve a league title more than anybody.

Player-wise, Fabinho and Mane were absolutely colossal. Trent was also vital when he came into the game more in the second half.

BRETT: Dejan Lovren. It feels harsh to negatively target one individual—especially one short of game time this calendar year—and I do think he can still do a job in most games for us.

But at this stage he’s a clear weak link against high-quality attackers like Heung-min Son and Harry Kane.

With those two naturally combining in Spurs’ left-channel and Trent bombing forward at will, the recipe always looked there for a tough afternoon for Lovren.

Most concerning of all, though, was how often he was caught under the high ball, as in the past this has been a strength of his.

DAVID: I can’t be too critical. Henderson’s lack of press-resistance lost possession prior to Spurs’ goal but it only transpired through a freak sequence of events: the deflection off Lovren, hitting the post and falling perfectly for Kane.

Lovren was Lovren meaning generally solid but always capable of a glaring lapse (see Genk last week) which may or may not cost Liverpool a goal.

On Sunday he won nine out of his 12 duels, generally dominating Kane who had purposely moved away from Van Dijk and targeted the weaker centre-back.

Yet his one big mistake was inches away from costing Liverpool a 2-0 deficit. Son’s shot that smacked our crossbar arrived via Lovren misjudging a simple goal-kick and allowing it to drop over his head into the forward’s path.

He then lacked the recovery pace to stay with the South Korean. That’s an area of the game where Gomez is by far his superior.

MATT: The Mirror‘s John Cross giving Fabinho a six (yes, a six) in his player ratings.

Football isn’t for everybody is it? Really bad opinion that.

The early goal made it inevitable that Spurs would sit deep, but they were like a lower-league side at times; organised, fair enough, but lacking much else and more focused on kicking lumps out of our players.

And is it time to reconsider Liverpool’s ‘big-game’ midfield?

BRETT: In the mid-term, certainly.

While Henderson and Wijnaldum do a solid job protecting space around the undroppable Fabinho and the flying full-backs, there’s a distinct lack of creativity when they’re on the ball.

Naby Keita, Alex Oxlade-Chamberlain, Adam Lallana and even James Milner all bring more progressive passing, dribbling, and/or goal threat when given the opportunity.

I think Klopp will play it safe against City in two weeks’ time—understandably so given the threat they possess in the half-spaces—but he has to roll the dice more frequently after the international break in order to consistently create higher quality chances, especially against well-drilled bus-parkers.

DAVID: After Keita and Oxlade-Chamberlain excelled versus Genk I had hoped one or both may start.

Klopp’s preference for his ‘big-game midfield’ can sometimes be a weakness.

But against Spurs his selection was vindicated as Liverpool largely controlled central areas with Fabinho the standout once again.

His high level of performance is becoming as routine as those delivered week in, week out by Van Dijk.

Henderson is the ‘Jekyll & Hyde’ figure that divides opinion.

While I don’t see him figuring in our first choice or ‘optimal’ midfield he still has his merits and a big part to play in any success Liverpool have this season.

He doesn’t have the unique skillset of Keita (dribbling, progressive passing, press-resistance) nor the drive and knack for long-range shooting that Oxlade-Chamberlain possesses.

His ability to fill a role for the team within Klopp’s system can rarely be faulted though.

Against Spurs he lost possession 30 times (more than Fabinho and Wijnaldum combined), was at fault for their goal and completed only 65 percent of his passes which was the lowest on the team and by some distance.

But he competed hard, winning eight of 13 duels, had 11 ball recoveries (same as Fabinho) and, crucially, he had the wherewithal to break into the box and the composure to finish well with his wrong foot.

The big-game midfield might not be as aesthetically pleasing as some of Liverpool’s other potential combinations but on Sunday again proved it can be effective and get the job done.

MATT: Not many of us liked the previous ‘preferred midfield’ of Henderson, Milner and Wijnaldum, and the general consensus is that this new incarnation is relatively similar. But there must be a reason for this.

The trio are doing things tactically that we’re not aware of, or find difficult to see. They are so finely tuned to the overall system that they are the best option.

Keita and Oxlade-Chamberlain will get plenty of opportunities over the next few months and the good news is that they’re developing and producing the goods when they do play.