European action under the Anfield lights awaits on Tuesday as Liverpool host Genk, where the Reds can move one step closer to the last 16.

Just when it appeared as though the Reds’ flair for the dramatics in a single week was exhausted following back-to-back wins over Tottenham and Arsenal, Jurgen Klopp‘s side struck twice at the death to secure a memorable victory over Aston Villa on Saturday.

Liverpool had been staring down the barrel of their first defeat of the Premier League season when the hosts capitalised on the Reds’ poor defending from a set-piece in the opening term, only for Andy Robertson and Sadio Mane to each find the net in the closing stages to take all three points back to Merseyside.

It was further evidence of the never say die attitude which has become a hallmark of this side and ensures the opportunity to extend their lead over Man City to nine points awaits on Sunday.

However, before Klopp and Co. can turn their attention to the all-important league fixture, European action is first on the agenda as Genk make the trip to Anfield.

With six points collected from the first three games, the Reds can move a step closer to the knockout stages with a successive victory over the Belgian side.

And while the Reds will head into the meeting full of momentum and confidence following successive victories, Genk arrives off the back of a 2-0 defeat – with a win and a draw also to their name since their 4-1 loss at the hands of Liverpool.

Klopp’s side are, therefore, heavy favourites to pick up their third win in Group E to set up the clash with Napoli on matchday five as one where Liverpool can cement themselves in the top two, and provide the opportunity for rotation at Salzburg in the midst of a fixture pile-up in December.

The Reds will head to Anfield with a near full squad available for selection after emerging unscathed from the clash against Aston Villa.

But after a flurry of games in quick successions rotation is certainly on the cards with the weekend in mind, with the boss having alluded to adding a “couple of fresh legs” into the lineup for Genk’s visit.

Jordan Henderson could be one of those names to miss out, however, as while there is no indication that there is anything to be concerned over, he was absent from training on Monday.

Fabinho, meanwhile, will undoubtedly return to the fold having been omitted from the starting XI over the weekend due to the looming suspension in the Premier League, meaning Adam Lallana is expected to move to the bench after starting two games in three days.

Moreover, there are options aplenty in the middle of the park should further changes be made.

Alex Oxlade-Chamberlain continued to put his name forward with a bright cameo against Villa, while Naby Keita also put to bed any lingering concerns over his fitness from the Arsenal game having also featured late in the league win.

Mohamed Salah is another main candidate to be rotated out as he continues to experience lingering effects of the ankle injury he sustained in October, where an extended break will be likely to benefit both the player and the club ahead of City and his involvement for Egypt on international duty.

As such, it presents Klopp with the invaluable opportunity to utilise players on the fringe, with Divock Origi a candidate to slot in for Salah, while Rhian Brewster could make the squad after continuing to train with the team at Melwood.

Sweeping changes are not expected in defence, but Joe Gomez and James Milner could be called upon should the likes of Dejan Lovren or Andy Robertson be rested.

Genk, on the other hand, have named a 25-man travelling squad, with defender Jere Uronen named despite being ruled out due to injury.

Liverpool Squad in Training for Genk 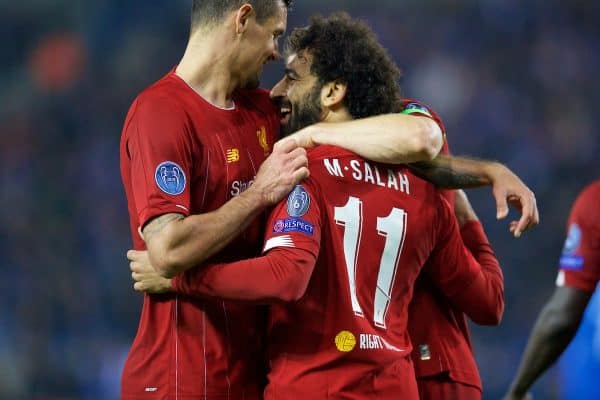 Only three sides in the Champions League history have scored four or more goals in three successive games, and Liverpool could find themselves named twice on that list with another convincing victory on Tuesday having notched four goals against both Salzburg and Genk this term.

In 2007/08, Rafael Benitez’s side notched an 8-0 win over Besiktas before a respective 4-1 and 4-0 win over Porto and Marseille in the group stages – with the run ending in the last 16 with a 2-0 victory against Inter.

Real Madrid, meanwhile, achieved the feat across two seasons having overcome Bayern Munich and Atletico Madrid by four goals on their way to the crown in 2013/14, before starting the new campaign with a 5-1 win over Basel.

Most recently, Paris Saint-Germain joined the list in 2017/18 with two convincing victories over Anderlecht with a combined goal tally of nine to which they followed it up with a 7-1 win over Celtic.

With the Reds in an unforgiving mood in front of goal in Europe at this point in time and Genk having shipped at least five goals in each of their last three away matches in the competition – dating back to 2011/12 – it could be another memorable and record-equalling evening in front of the sticks for Klopp’s men.

Speaking in his pre-match press conference, Klopp was adamant that the upcoming visit of Man City would not be on the minds of his players as Genk have “100 percent” of their focus:

“The story the boys wrote in the last three years was only possible because we were always focused on the next game with all we have.

“Nobody thinks at this moment, and I don’t have to tell the boys, that City is on Sunday and tomorrow is Genk.

“We have big ambitions in this competition tomorrow night and it’s still an open group. Everything is possible so we have to be 100 percent spot on and we have to create an incredible atmosphere again and make life as uncomfortable as possible for Genk.

“They will want to strike back, that’s how football is and it’s 100 percent clear that we really have to put in a proper shift.” 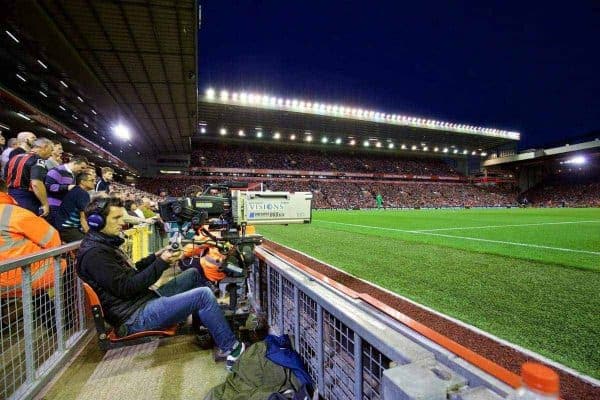 Liverpool’s meeting with Genk is live on BT Sport 3 from 7.15pm (GMT), with kick-off at Anfield scheduled for 8pm.

Ben Twelves will be keeping you entertained and providing minute-by-minute updates from 7.15pm on This Is Anfield’s matchday liveblog.