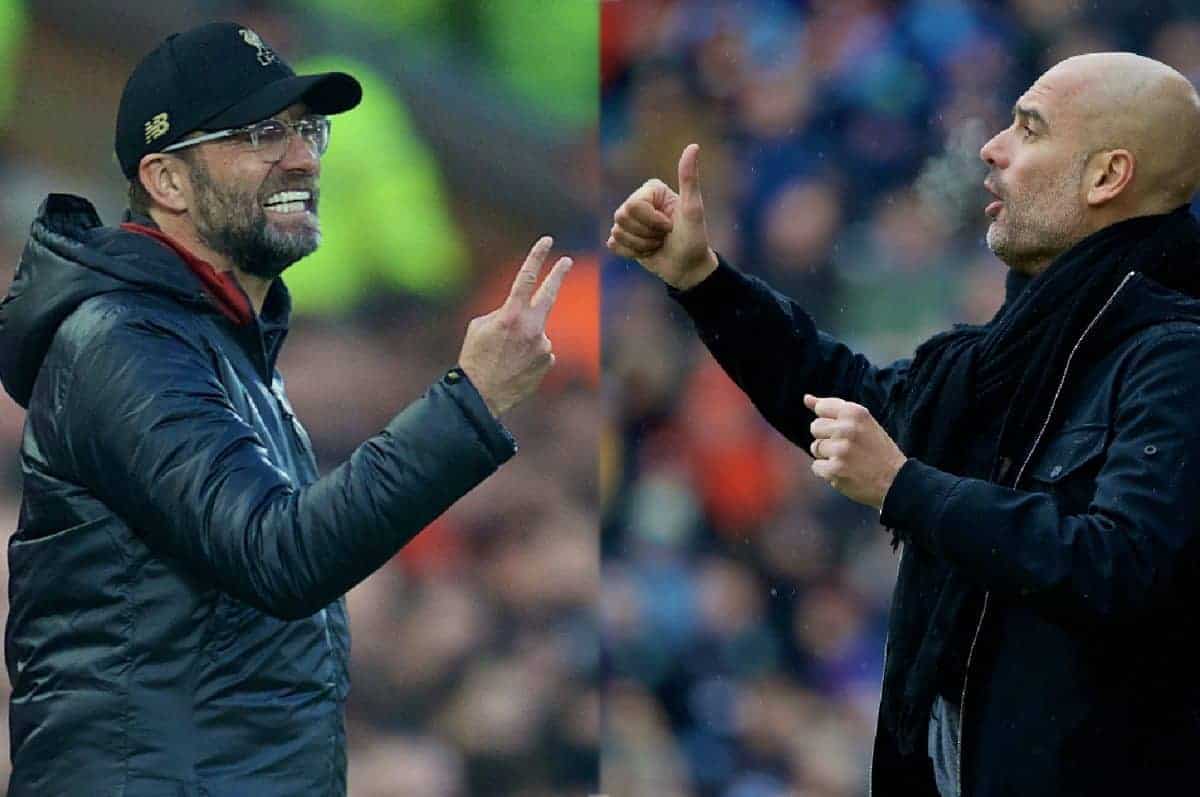 Jurgen Klopp believes Pep Guardiola focuses much more on Liverpool than the Reds manager himself does on Manchester City, joking his “brain is not big enough to think about another team.”

In the immediate aftermath of City’s 2-1 win over Southampton, which kept them six points behind their title rivals at the top of the table, Guardiola was aiming “diving” barbs at Sadio Mane.

Klopp, by contrast, insists it was at least 45 minutes after the final whistle of their added-time victory at Aston Villa—where Mane was booked for going down under a challenge from Frederic Guilbert—before he even learned of the day’s other scores never mind look at the games in detail.

The German said he was not interested in talking about Manchester City, who visit Anfield on Sunday, with a Champions League game at home to Genk up first on Tuesday.

But when questioned about the timing of Guardiola’s comments Klopp said: “I have no clue. Do I get asked as well as much about Man City? I don’t know.

“When I came into the interview after the game for example I really had no clue what the other Premier League results were. That is the truth.

“When I come into the dressing room I don’t come in and say ‘what’s the result of the other games’.

“I didn’t think for one second about the other games. Then after the interviews: ‘By the way, how did the other teams play?’ then someone told me, City won in the 86th minute and all this happened.

“It was 45 minutes after the game when I heard the results of the other games.

“I don’t understand these types of things. My brain is not big enough to think about another team as well.

“I have enough to do to think about us and deal with all these things. Tomorrow we play Genk and that deserves all my attention and gets it. After that we can speak about Manchester City.”

In his press conference ahead of the Genk game Klopp had stressed he was “absolutely not in the mood to talk about Man City.”

However, away from the television cameras the Liverpool manager showed he understood full well that the mind games had started and could not resist a dig of his own.

“I couldn’t really believe it to be honest and then I saw it. I am not sure if Pep spoke in that moment about Sadio or the team—both is not too nice to be honest,” he said.

“I am not too sure if I want to put oil on the fire. I am not interested in these kind of things—and I promise not to mention tactical fouls.

“That is maybe already too much, but that is the only thing I say about it!”

A win against Genk would go a long way to securing Liverpool’s progress to the knockout stage as Liverpool have a three-point cushion over Red Bull Salzburg, who face Group E leaders Napoli.

Their 4-1 win in Belgium a fortnight ago was an occasionally chaotic affair after Klopp opted for an experimental midfield with Naby Keita and Alex Oxlade-Chamberlain, who scored twice on the night, leaving Fabinho regularly exposed.

Klopp’s team selection may not be as open as that at Anfield but he stressed the onus is always on them to attack.

“I don’t like football games if you only speak about offensive things. That is not the respect you need for an opponent at Champions League level,” he said.

“We try to control the games, maybe it doesn’t look like that, but we try.

“‘You always die one death’ we say in Germany, which means you try one thing really. You have to try and create.

“Probably they will not come here and have more possession than us and then we have to be creative and that means opening up the formation.

“We have to make sure that we improve our situation, not their situation.”