Jordan Henderson and Joe Gomez have both returned to Liverpool after withdrawing from England’s final Euro 2020 qualifier in Kosovo.

The latter has experienced a tumultuous time with the Three Lions after Raheem Sterling clashed with the Liverpool defender earlier in the week which led to the ex-Red being sidelined for the win over Montenegro.

Gomez, however, was introduced late in the piece at Wembley and was surprisingly booed by fans, where he has since garnered the support of his manager, teammates and the wider footballing world.

He was in contention to feature against Kosovo on Sunday but a host of journalists have confirmed that he is now on his way back to Merseyside for treatment after sustaining a “knock to the knee” in a training ground collision with Kieran Trippier.

The impact injury is “not thought to be serious” and as such is in line to recover in time for Liverpool’s trip to Crystal Palace. 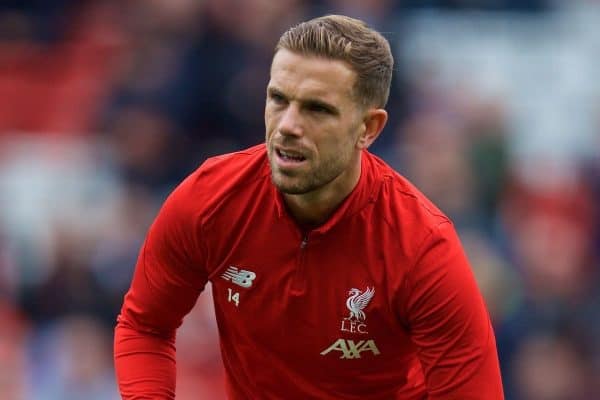 Henderson, meanwhile, has failed to recover from a virus which saw him miss Liverpool’s win over Genk and led to his withdrawal with an hour on the clock in the 3-1 victory over City.

The Reds’ skipper reported to England duty later than his teammates and failed to take to the field in the 7-0 win in midweek.

Gomez and Henderson join Mohamed Salah and Andy Robertson as the latest senior figures to withdraw from international duty this month.

And while the duo will be provided time to recover with the club, Trent Alexander-Arnold and Alex Oxlade-Chamberlain will remain with Gareth Southgate’s squad.

The pair were both named in the starting XI against Montenegro, with Trent playing the full 90 and notching an assist while Oxlade-Chamberlain opened the scoring and featured for 56 minutes.