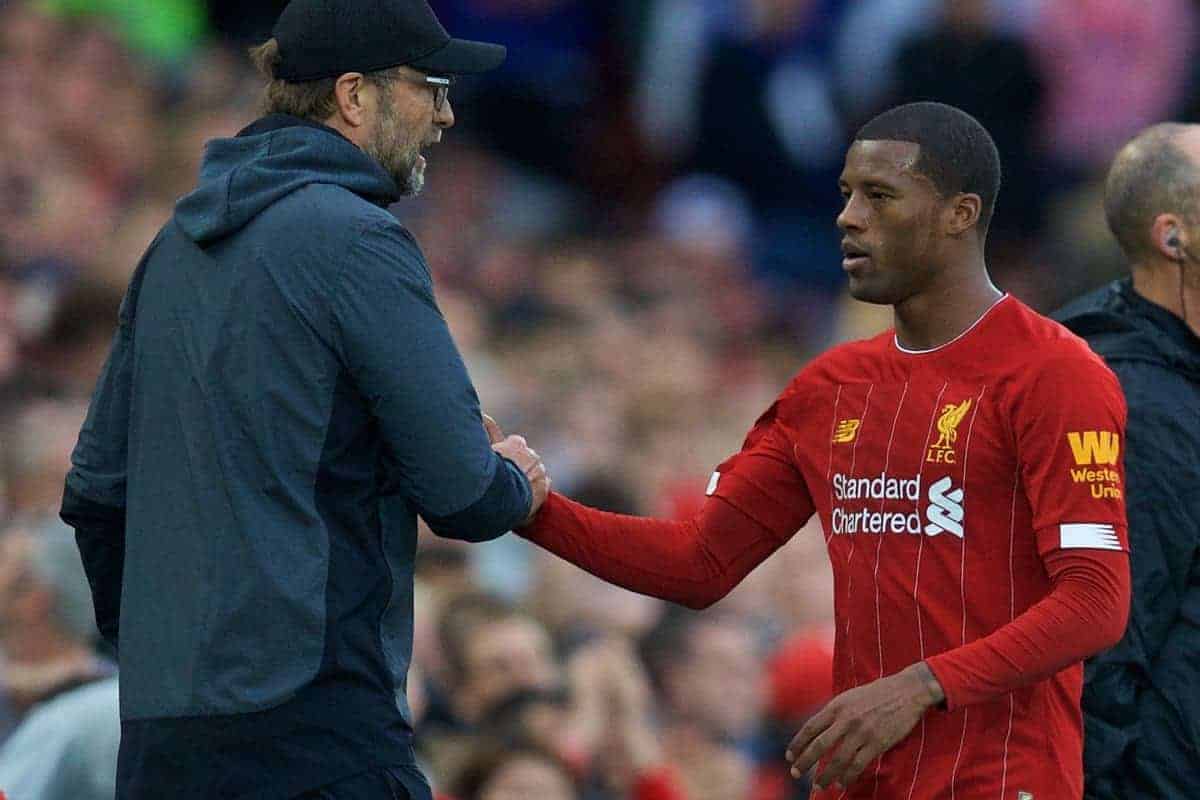 Jurgen Klopp has recalled his switch from striker to right-back as a player in Germany, and explained how versatility is key for Liverpool.

Klopp played for a number of sides throughout his youth career, but can be considered a one-club man at senior level as he broke through at Mainz and stayed there until his switch to management.

That came in strange circumstances, as he was asked to take duties as manager midway through the 2000/01 season after Eckhard Krautzun’s dismissal, steering them clear of relegation after retiring as a player.

Prior to that, he made 340 appearances for Mainz, with 95 coming under Wolfgang Frank, who he credits as his biggest influence as a manager.

It was Frank who made the decision to switch Klopp from the role of first-choice centre-forward to starting right-back, and speaking to Pro:Direct Soccer, the 52-year-old reflected on the change.

He said he was “always a striker” because he “had a good header and was really quick,” but “technical-wise I was not too good.”

“From a nowadays point of view, I would say [moving to right-back] makes complete sense: I would have done the same to me,” he continued.

“I would have made myself, maybe a centre-half, but I would have put me in the back. Because really quick, good attitude…but not brilliant with the ball.”

Elaborating on the game that changed his career, Klopp explained how it allowed him to go from his own “biggest enemy” to having been “just happy to have a game.”

“But then at one point a new manager came in, he was the best manager I ever had: Wolfgang Frank.

“He changed the system. It was a friendly game in the pre-season, we had a game against a team from one league lower, they were first in that league, we were last in the [one above].

“That’s a difficult game to play as friendly, and he said ‘OK, we change the system’. He made the lineup and in that lineup I was at right-back.

“Half-time in that game was 6-0 to us, we played incredibly, we defended like lions, it was really brilliant.

“Then we changed completely and the second half team played 0-0, so we won 6-0 and from that moment on, the team from the first half played for the next 50 games and I was right-back.

“That’s how it started, and from that moment on I was the right-back. [I was] 100 percent [fine with changing]. For me there’s was no problem.

“I was my biggest enemy, because I hated my football, I really didn’t like it. When I tried to stop a ball, it bounced. I had these inner talks.

“I was really not a supporter of myself, but only wanted to play. If he told me ‘you look like a decent goalkeeper’…give me the gloves, I do it.

“So I was just happy to have a game, and the pressure went off my shoulders as well. Because in a team [like Mainz] and you don’t score a lot of goals as the main striker, each chance you miss it’s not like there’ll be another one.

“I was not involved anymore in that, and I still scored two, three, four goals on average, it was OK.”

Klopp was asked about the number of versatile players throughout the Bundesliga, and he disagreed that it was German-specific, highlighting a host of examples in his Liverpool squad.

And he stressed that it “helps a lot” to have a variety of options for every role, spread out over a smaller core of multi-talented players.

“We have them as well, James Milner can play around 13 positions probably, he probably would be the first choice if all the goalies were out,” he said.

“Fabinho can play at least two, Trent can play a lot, so we have that. We don’t have that many specialists.

“People think sometimes it’s a weakness if you’re that versatile, because you think ‘OK, I don’t have a fixed position, he puts me in there, there, there, then I’m out’.

“It is [a strength]. It helps in building a squad, especially. That helps a lot.

“Because you don’t have a specialist in these positions, you have three, four, five players that can play really different positions, that helps you a lot.”

Klopp’s assertion of versatility being seen as a “weakness” by some is an interesting callback to Gini Wijnaldum‘s comments in 2018, when he said: “It is a quality, but also a weakness.”

“If players can only be in one position, managers do not even think about moving them,” the Dutchman continued.

Of course, Wijnaldum is one of Liverpool’s most versatile players, but this has also helped him to make the third-most appearances under Klopp since his appointment in 2015, with 157.

Only Milner (184) and Roberto Firmino (203) have featured more over the past four years.