Liverpool FC Women were left with a “moment to cherish forever” at Anfield on Sunday despite their 1-0 defeat to Everton.

Vicky Jepson’s side welcomed the Toffees to Anfield for the stadium’s first-ever Women’s Super League fixture on Sunday, an historic occasion which saw dreams come true.

The Reds headed into the clash at the bottom of the table having picked up just one point from their preceding five games, while Everton were in fifth position.

The Sunday afternoon kickoff was welcomed by a 23,500-strong crowd who were vocal in their support from the off for the momentous outing.

Liverpool Women dominated proceedings throughout the entire fixture, with Niamh Charles and Rinsola Babajide providing the excitement factor down the wings in the first and second half respectively.

But, as has been the case throughout the season so far, goals continued to be hard to come by for the Reds who entered the clash with just one league goal to their name -and they paid the price.

A long-range effort from Everton skipper Lucy Graham was fumbled over the line by Anke Preuss on the cusp of half-time inflicted a deficit which the Reds were unable to recover from despite their best attempts. 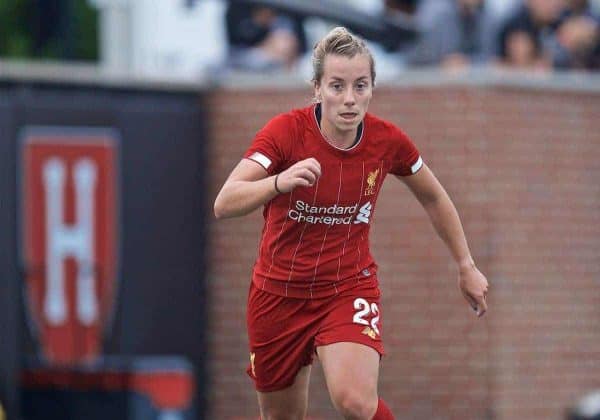 After the game, defender Becky Jane told reporters of her joy at playing Anfield and that her side could take “confidence” from the game, and once the Reds hit the back of the net they will get on a roll.

“[We can] definitely [take confidence from the game]. As a back four we did not get carved open and we were quite solid at the back, the midfield got stuck in and we created a lot of chances it’s just taking them.

“It was incredible to walk out to You’ll Never Walk Alone and to see 23,000 people there was incredible and it shows there is support for the women’s game and hopefully they come back again.

“It most the biggest crowd I’ve played in front of and to hear the crowd roar was fantastic.

“We were the better team in both halves and now it’s just hitting the back of the net. Once we get that first goal it’ll create confidence around the team, but it will definitely come.”

Once they had time to digest the result and reflect on the occasion, the Liverpool Women squad took to social media to express their delight at the turnout.

Babajide and Melissa Lawley thanked the “23,000+ supporters” who came out in support as they both promised to “go again”:

Thank you to the 23k+ supporters that came to our game today, sorry we couldn’t get the result for yous but it’s definitely coming for sure ???? https://t.co/SPEkXJiPbA

23k+ fans at our game yesterday. Thankyou so much for your support. We go again ??? pic.twitter.com/kJuJ94DvQC

Rhiannon Roberts, Charles and Ashley Hodson, meanwhile, were left “gutted” by the result but the chance to play at Anfield is something they’ll “cherish forever”:

Words can’t describe how gutting the result was yesterday, we were by far the better team and deserved something from that game. To our 23,000 fans, you were incredible the whole game! Thank you for your support! #Reds #liverpoolwomenfc ? pic.twitter.com/Pi0hrghWbi

Gutted about the result yesterday. Playing on Anfield was something I’ll cherish forever. A special thank you to the 23,000+ unbelievable fans who came out to support. You are what makes this club so special. Proud to be apart of yesterday and of this club. #YNWA @liverpoolfcw pic.twitter.com/BS2bwomrdD

The result yesterday still hurts. We deserved more. What an experience to play at anfield in front of 23,000+ Thankyou to every single one of you that came to support us.. WE GO AGAIN ?

It was a case of expressing pride for playing for Liverpool and celebrating the supporters who got behind the team for Kirsty Linnett and Courtney Sweetman-Kirk:

I honestly have no words for today I’m absolutely gutted, but the support was incredible. The result didn’t go our way but I’m so proud to be a part of this club! We go again ????

What experience. Thanks to all the supporters that came out and got behind us! Sorry we couldn’t give you the result your support deserved. Hopefully the first of many chances to play at Anfield? https://t.co/ZtuiNzwAGE

And Jepson was of the view that “the stronger team lost” as she too expressed her gratitude for the LFC family:

The stronger team lost today! Proud of our LFC family!

The Red fans were incredible. ? #YNWA

While the Reds ultimately fell to defeat, Jepson and Co. will take the positives out of the clash as they look to climb up the ladder.

And they will not have to wait long to get back out on the park as they travel to face Blackburn Rovers on Thursday evening in the group stages of League Cup, where Liverpool Women have picked up three of a possible nine points thus far.