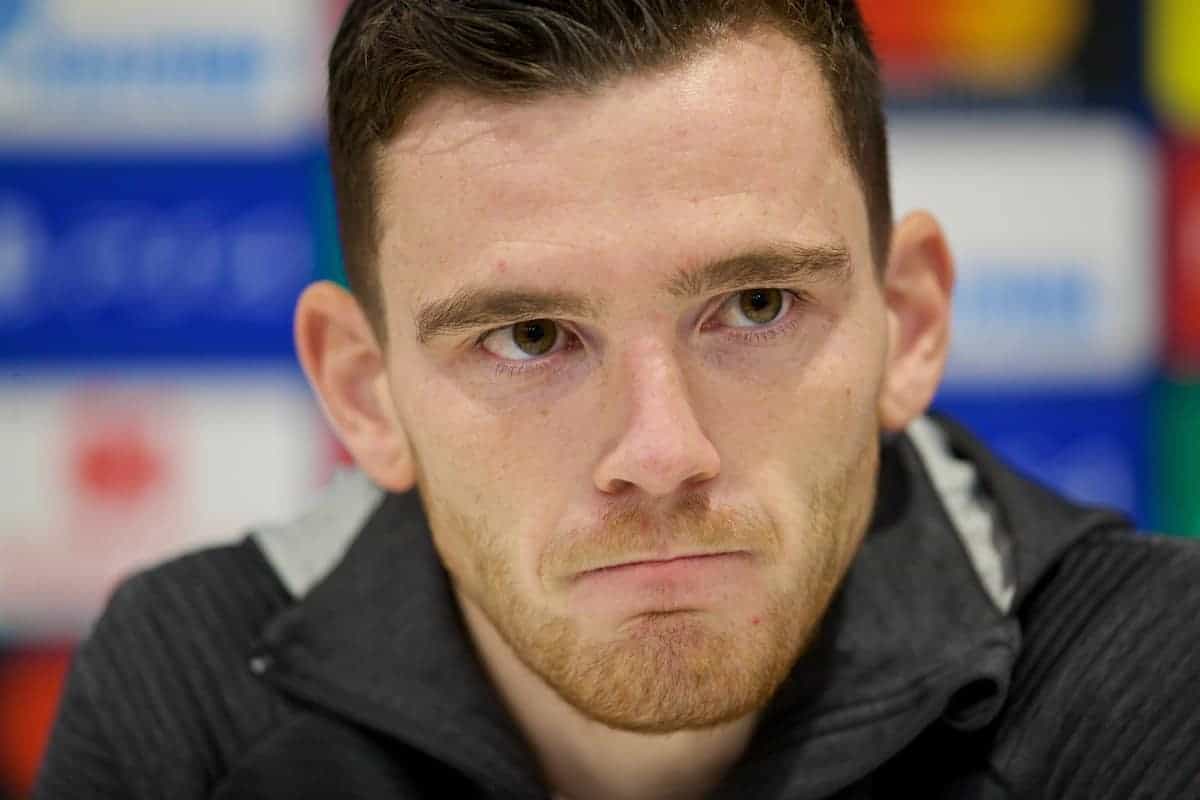 Liverpool defender Andy Robertson has brushed aside concerns over the club’s fixture pile-up by insisting it matters little to the players.

Jurgen Klopp’s side have just begun a spell of 14 matches in 43 days up to and including their entry into the FA Cup in the first week of January.

That also includes two matches in 24 hours on different continents because of their involvement in the League Cup and Club World Cup.

Should they progress through the League Cup quarter-final tie at Aston Villa in December they would then face a two-legged semi-final, meaning potentially another seven matches in a month.

However, Robertson put it all into perspective by saying: “If you were to ask me would I would swap my Champions League winner’s medal for less fixtures, absolutely not.

“When we look at it, it is sort of a compliment. The reason we have got all these fronts is because we have been successful.

“It is a credit to us and it’s because of our success and that is something we have to take the positives from.

“Of course playing two games in 24 hours is not ideal and however the manager is going to deal with that is fine.

“But we have got two big competitions and hopefully in the two squads we put out both of them will be strong enough to try to see us through.

“If not then it is a consequence of not being able to fit enough games in but we believe any team that goes out is good enough to win the games and that’s what we’ve got to do.”

Robertson would be a major beneficiary of playing fewer matches as he is currently managing an ankle problem which has restricted his training in recent weeks.

He and his team-mates could help his cause with victory over Napoli in the Champions League on Wednesday as that would see them qualify for the knockout stage with a match to spare.

That would allow Klopp to rest the likes of Robertson and Mohamed Salah, who has been carrying an ankle injury of his own since last month and, as a result, was an unused substitute against Crystal Palace at the weekend.

Taking a break is something the Scotland captain is not keen on, however, and admits he has to be told to take it easy.

“I get paid to play games and paid to train and I—and all the lads are the same—don’t want to miss any training sessions or any games,” he added.

“Genk at home [earlier this month] is the best example for me: I wanted to play but the manager had made his mind up I was only going to play one of that or Aston Villa and he chose Aston Villa.

“It is all about managing and it happened with Mo at the weekend. Mo will have desperately wanted to play but it was better for him to have a couple of extra days of rest.

“We all want to play games but sometimes it is not possible and people need to step in and tell you otherwise and you have to respect that.”

Salah is likely to start against Napoli, having scored the winner against them at Anfield 11 months ago which secured knockout qualification on their way to winning a sixth European Cup in June, but defender Joel Matip is still out injured with a knee problem.

“Joel is improving but still some time away from the team,” said Klopp.

“This week is an important one. We will see how it is and then we can make a decision. Nothing we can rush. We just have to wait.”