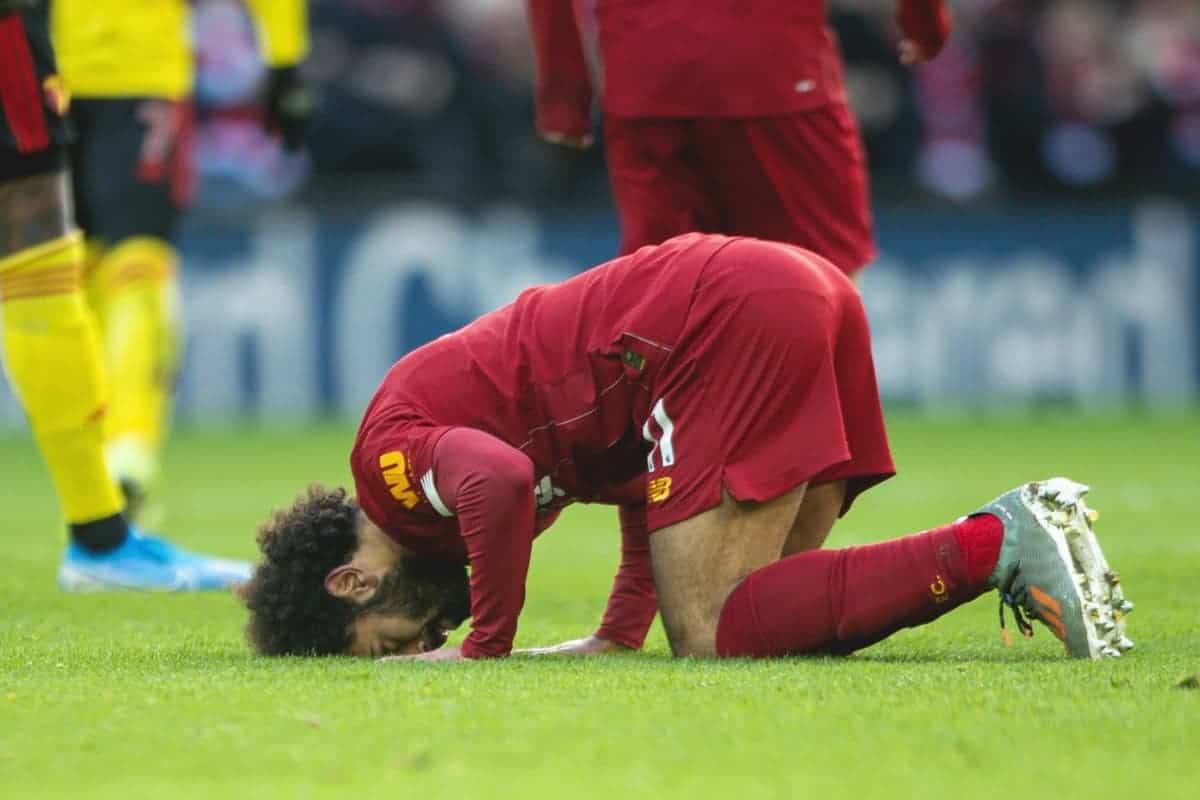 Liverpool beat Watford 2-0 at Anfield on Saturday afternoon, as Mohamed Salah‘s double inspired his side to victory.

The Reds welcomed the Premier League‘s bottom-placed team to Merseyside, but the visitors didn’t perform like that.

The Hornets gave Liverpool a stern examination on a windy day, with Salah’s brilliant brace the difference between the two sides.

Salah produced a lovely turn and finish in the first half, before flicking home impudently in the dying minutes.

The three points are all that matter, as Jurgen Klopp‘s side pulled 11 points clear of Leicester and 17 ahead of Man City.

Salah was lauded, on a day when he shone brightest…

I saw people asking him to be dropped and criticising him as he still played through an injury but Salah can shut the haters up now.

Back in form with 4 goals in 2 games, 84 goals for us which is more than Suarez and Torres yet he’s still disrespected.

Another massive win, Salah the standout player. Somewhere close to his best again.

“Fantastic MOTOM from Salah this afternoon.”

“A couple of moments of magnificent Mo magic made the difference.”

Salah now with more goals for #LFC in all competitions than Luis Suárez in fewer games, by the way. Phenomenal.

Great ‘keepers are made by their ability to rise to the moment & deliver the big save while making it all look so easy. Alisson with several decisive saves vs Salzburg & another huge one today. He is the base for all the brilliance; so much trust & confidence in his ability.

Alisson had one of those games again. Made everything look dead easy but he was actually brilliant.

Tough win against a much better Watford side than in recent weeks, those Alisson saves were vital ??

Alisson Man of the Match for me. Also good were Salah, Mané & Gomez (other than that bad header that led to Virgil's back pass that was nearly an own goal)

You know I'm pleased with that.

Firmino’s form is worrying, though…

Firmino has been awful since the end of September, honestly thought he was gonna have a class season after the first 5 games

Early kick offs aren't ideal for Firmino. He's not had a chance to get all of the Guinness out of his system.

Firmino playing based on reputation and no main competition. Has been poor for at least 3 months now. Passing, 1st touch, finishing- very poor #lfc

But many hailed the gritty nature of the win…

That’ll do nicely. Can’t be at our best every week. 3 points, clean sheet, job done. Great goals by Mo.

No clean sheet in 13 games, followed by three in a row. All of them in Fabinho's absence. Football is weird sometimes.

#LFC made to work for that by a hugely impressive Watford but they take a sizeable Premier League lead into Christmas and will be able to watch on from Qatar as Leicester and Manchester City go head-to-head. Might even be world champions when they get back.

“Tough tough match as it should be after a difficult away trip to RB! A rejuvenated Watford played well but 3 huge points now let’s go be champions of the world!”

You were crap Liverpool but you won. Cheers.

3 points all that matters. On we march.

“Yet again a horrible scrap against a team which definitely benefited from a new-manager bounce. And yet again, our lads found a way. Three more points.”

could've lost, didn't. just wear you down like the damn tides. boot stamping on a human face – forever. Liverpool, that.