Many Liverpool players were not at their best against Wolves on Sunday, but the 1-0 victory at Anfield was all that mattered.

The Reds hosted a dangerous Wolves outfit, knowing three more points would be priceless in their quest for Premier League glory.

An ugly game unfolded on Merseyside, as both teams showed signs of fatigue after a relentless festive period.

Sadio Mane fired home after 42 minutes, with VAR overturning referee Anthony Taylor’s decision after the goal had been disallowed, while Pedro Neto’s strike at the other end was chalked off.

Wolves bossed proceedings in the final 20 minutes, but Liverpool held on impressively, albeit thanks to several glaring misses from the visitors. 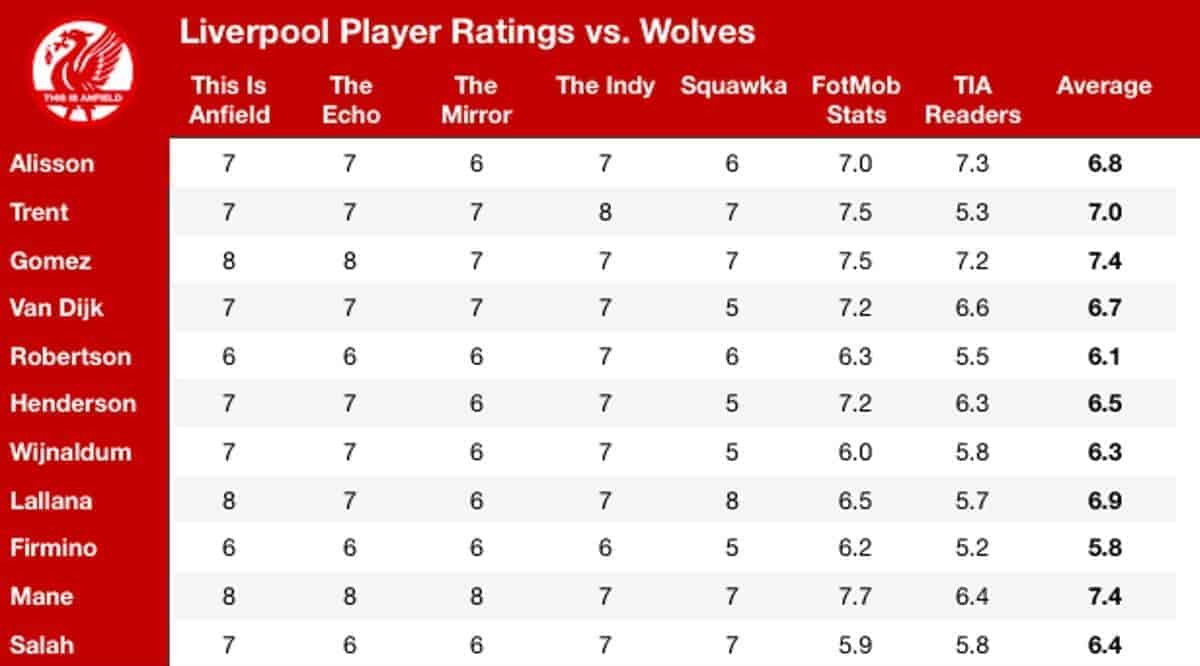 Mane (7.4) and Joe Gomez (7.4) shared the highest average rating, on a day when both were worth their weight in gold.

Gomez looks back to his best at centre-back, following a post-injury dip, outperforming Virgil van Dijk (6.7), who actually had a couple of shaky moments.

TIA’s Ben Twelves gave the 22-year-old the Man of the Match award, describing him as “flawless in his defending.”

Ian Doyle of the Echo felt Gomez “maintained his cool,” particularly as some of those around him seemed to lose theirs late on.

Mane scored the game’s only goal and the Mirror‘s Aaron Flanagan praised how he “popped up all over the pitch.”

Twelves added that the 27-year-old was “tireless in his defensive work,” showing that there is so much more to his game than just goals.

The only other player who averaged seven out of 10 or more was Trent Alexander-Arnold (7.0), as his excellent form continues.

Although Squawka hailed “several impressive crosses” from the youngster, they were also quick to stress that he was a “non-entity as a defender in the last 10 minutes.”

Recent goalscoring hero Roberto Firmino (5.8) was seen as Liverpool’s poorest performer, with Flanagan claiming the Brazilian was “quiet by his standards.”

Next up for Liverpool is Thursday’s visit of Sheffield United, as 2020 gets underway at Anfield.