Liverpool battled their way to a 2-0 victory at home to Watford on Saturday as Jordan Henderson joined three legends in the Premier League rankings.

The Reds were never at their best at Anfield but, as has become the norm this season, they picked up all three points.

Mohamed Salah was the hero for the league leaders, scoring two superb solo efforts against a stubborn Watford outfit.

Leicester‘s subsequent 1-1 draw with Norwich means Liverpool are 10 points clear at the top of the table, as Reds fans continue to dream.

Salah has cut a frustrated figure at times this season, but despite not always finding his top level he has still been a huge threat.

The Egyptian was at his best on Saturday, leading the line in a 4-2-3-1 formation and inspiring Liverpool to a gritty win.

Salah is now Liverpool’s joint-top goalscorer this season—do we take him for granted?

Jordan Henderson‘s career has been a soap opera, as the midfielder has fought to win over the doubters.

The Liverpool skipper’s reputation has been enhanced greatly after last season’s Champions League success, though, and his form has been impressive of late.

Saturday’s win saw Henderson taste victory in the Premier League for the 150th time in a Reds shirt, meaning he joins three club legends in the process.

Only Sami Hyypia (172), Steven Gerrard (255) and Jamie Carragher (264) won more times, summing up how successful Henderson’s Liverpool career has been.

He will never be appreciated by the masses, but he is carving out an increasingly impressive Reds career. 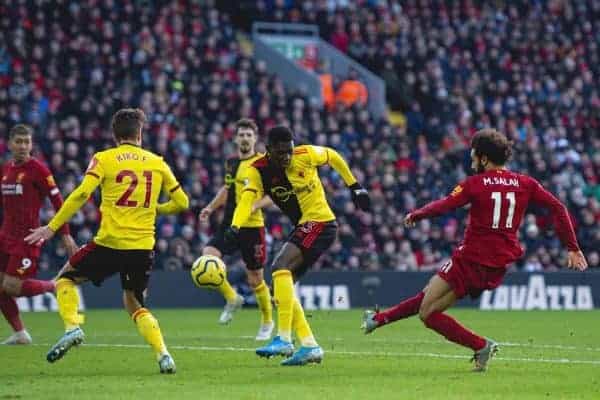 It is almost impossible to comprehend how good Liverpool have been this season, with just two points dropped in their opening 17 matches.

Jurgen Klopp‘s side are threatening to break all sorts of records and one statistic is proof of their brilliance.

Incredibly, City hold exactly the same advantage over Southampton, who sit 18th in the table.

For the Reds to be so far clear of one of the best English sides in history shows the remarkable level they are playing at in 2019/20.

Klopp famously spoke about making Anfield a fortress again when he took charge back in October 2015—it’s fair to say he has delivered.

Liverpool’s home ground is now one of the most daunting stadiums to visit, with the Reds putting together a stunning run there.

Liverpool have only been behind for 154 minutes during that period. What this team is doing is beyond ridiculous. 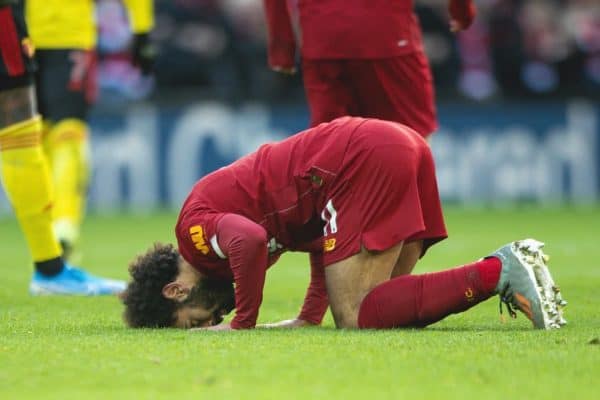 How about one final stat to blow your mind?

The win over the Hornets means Liverpool have won 25 and drawn one of their last 26 outings, with the only dropped points coming at Man United in October.

While the Reds have had to dig deep in a number of those games, sometimes winning in ugly fashion, scoring goals certainly hasn’t been an issue.

In 24 of those aforementioned fixtures, Liverpool have scored two or more goals—the 1-1 draw at Old Trafford and the 1-0 win at Sheffield United are the only games in which they have failed to do that.