100 seconds was all it took for Liverpool to secure their path to the knockout rounds of the Champions League in an entertaining game in Salzburg.

Even on an ordinary day, Salzburg are an expansive, attacking team. They have 64 goals in 17 league games so far this season (almost four per game!) and needing a win to progress in the Champions League they threw everything at it.

There was a moment midway through the first half where their manager, Jesse Marsch, picked up a ball which had gone out of play, held on to it, and told his team to take a break and calm things down.

But little did he know a ball boy had already thrown another ball to the throw-in taker and the game resumed. Marsch angrily returned his ball to the ball boy.

This meant there was space for Liverpool, too. They created numerous chances with Sadio Mane, Mohamed Salah, and Naby Keita going close, but there was also danger at the other end through Erling Haaland, Takumi Minaminon and Hee-Chan Hwang.

His first chance was saved by Salzburg goalkeeper Cican Stankovic, before he sent a second effort embarrassingly wide. Naby Keita put it on a plate for him, but the Egyptian dragged his first-time shot tamely off to the side of the near post.

He then hit a free-kick harmlessly into the stands, and as the second half started skied a shot over the bar from a brilliant Mane pass. Shortly after this he went through one on one with Stankovic but allowed the goalkeeper to get a hand in as he tried to round him.

Salah had put in an excellent display against Bournemouth at the weekend but here he looked out of sorts in front of goal.

Then he scored a ridiculous goal from an impossible angle. Jordan Henderson‘s pass over the top played him in behind the Salzburg defence. He rounded Stankovic but took it too far and too wide…

Or not. His shot with his weaker right foot somehow nestled in the far corner to make it two goals in two minutes for Liverpool and ensure qualification for the knockout rounds. 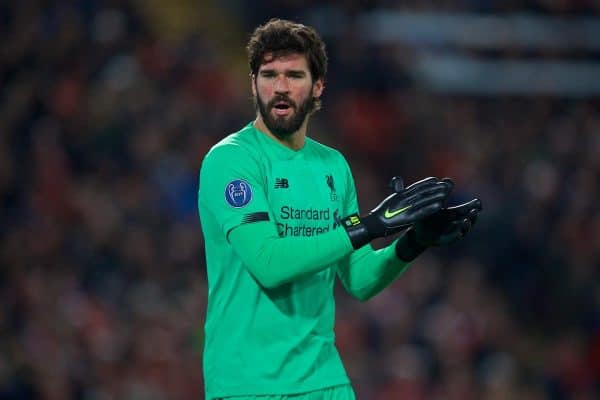 There wasn’t quite the defining save of last seasons Napoli game, but the Brazilian between the posts was important nevertheless.

Many of his stops look routine, but this is thanks to his excellent positioning.

He saved from Enock Mwepu early on, before a superb double save from attempts by Minamino and Hwang.

There was a save from Haaland and a number of routine but safe collections.

For much of the game he was stationed just outside his area ready to sweep up behind Liverpool’s high line.

On one occasion he was called upon to head clear as a ball came over the top.

The double-save may make the highlights, but there was plenty of other work to make this another important contribution from the best goalkeeper in the world.

It was another excellent performance from the Guinean who is starting to look an integral part of this side, with the usual proviso that he can remain fit.

He and fellow Red Bull alumni Mane were among the best players in red prior to the goals, so it was no surprise they combined to open the scoring.

Mane had been involved in a good battle with Salzburg right-back Rasmus Kristensen but managed to slip in between the full-back and the central defenders.

He worked his way slightly wide before dinking a cross to Keita who was in the place you’d want a midfielder to be, late into the box ready to take a chance, and he did so.

Watford then the world

Klopp’s outlook on this game will have changed in the two minutes it took for Liverpool to score their two goals to wrap the game up.

Rather than thinking short term, about this important game which still needed seeing out but no longer needed winning, he could now think differently about his substitutions.

Joe Gomez had already replaced the injured Dejan Lovren, and it would be a surprise to see the Croatian rushed back for Watford. This means Liverpool now have one fit centre back on each side, and not even a Fabinho to fill in.

James Milner replaced Roberto Firmino, whose performance was a fairly tired one, even though there was plenty of running as usual.

The U19s had staged a second-half comeback earlier in the day just outside Salzburg, and some of these players could be joining Curts Jones on the bench for the upcoming games.

The squad is stretched, but there are some good and important contributions from those, such as Keita and Origi, who have been on the fringes.