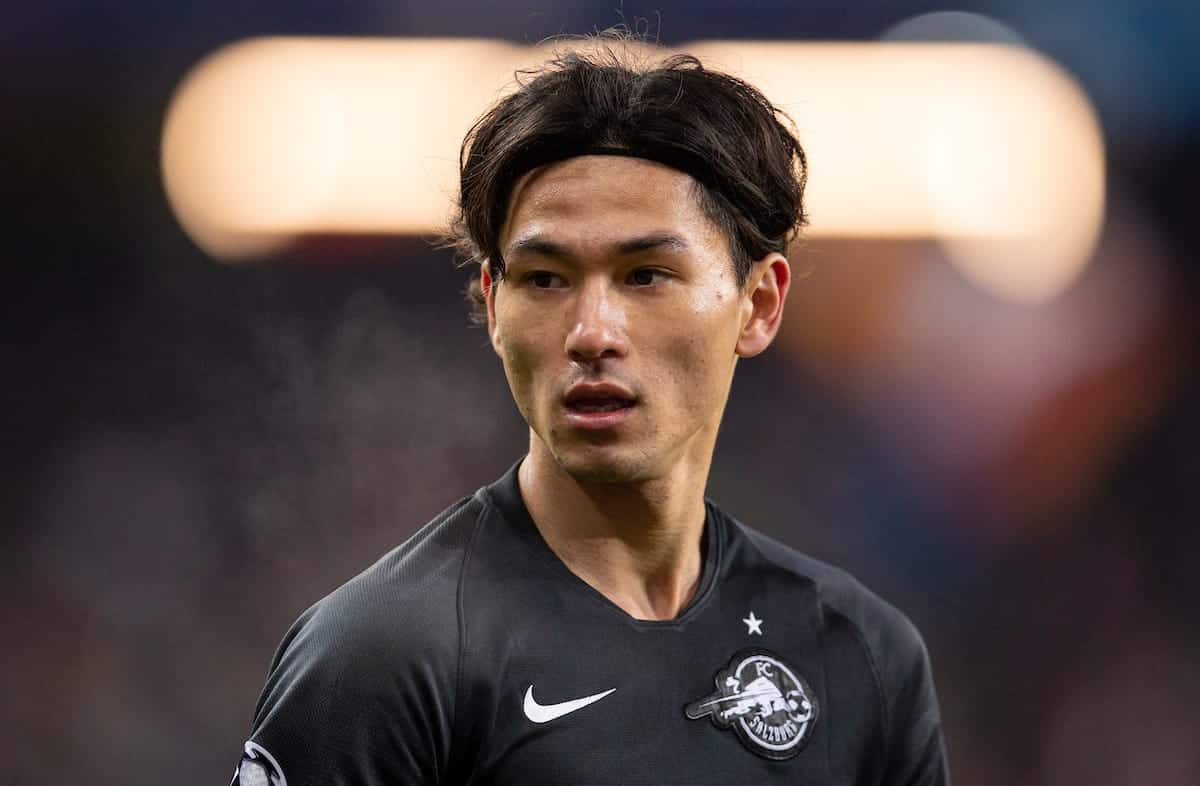 Liverpool look set to land one of the biggest bargains since Andy Robertson with the signing of Takumi Minamino, but what type of player are they getting, and what makes him such a good fit?

A design for Klopp

If Jurgen Klopp could design a player he needed for his current squad, they would look a lot like Minamino.

Higher profile attackers have been linked with the club during the past year, but none as versatile as the Japanese, who doesn’t appear to have a favoured position.

This might be why he’s not as high profile as many of the other names linked with Klopp’s side recently, and the fact he’s not playing in one of Europe’s ‘big five’ leagues contributes to this too, but in going straight to Austria for a player, Liverpool are missing out the middle man.

The Reds’ new No. 18 already looks to be an intelligent presser and is definitely a hard worker. Prerequisites for a Klopp signing.

It’s no surprise he received glowing reports from the Liverpool players who played against him and the fans who have been able to see him first-hand during the Reds two meetings with Salzburg at the beginning of the 2019/20 season.

Klopp spoke in glowing terms of their manager, Jesse Marsch, and there are a number players who caught the eye during these games — not least Erling Haaland and Hwang Hee-chan — but the Liverpool fans took Minamino to their hearts even before they knew he might sign for the club. 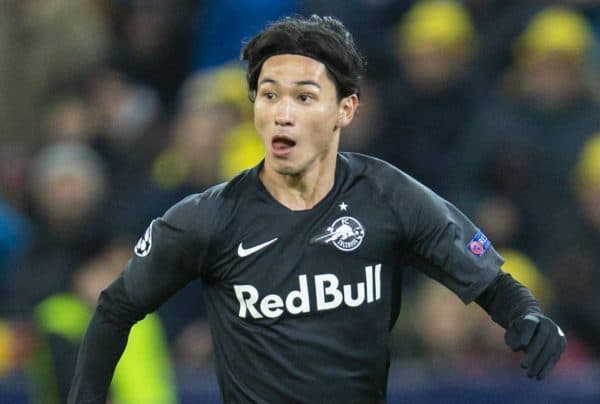 Salzburg sporting director Christoph Freund wouldn’t make the best salesman. The Austrian has been bigging up Minamino despite the Japanese having a £7.25 million release clause in his contract.

A fee which is widely considered (by Liverpool too) around a third of his actual value. It’s probably more accurate to say it’s at least a fifth of his potential value.

You would think a sporting director would try to keep this quiet, play down the player’s talent, and offer them a new contract with no or a higher release clause. Not Freund.

“The big clubs have been watching him and if I was them, I’d have no hesitation to sign him. Takumi is ready to make the next step in January.”

The Austrian has spoken about his player with enthusiasm and pride and seems genuinely pleased to see a player he knows can improve further, and has the will to do so, take the next step.

In many ways, this is more than one step up for Minamino. As part of the Red Bull group of football clubs, Salzburg is normally considered second in line behind RB Leipzig, with many of the Austrian club’s best players making the move to the German Bundesliga.

At 24 years old, Minamino is no longer one of Red Bull’s wonderkids, so a move to Leipzig might have seemed more sideways than up.

Naby Keita was 21 when he made the same move, and it would be much more likely to see a teenager such as Erling Haaland take that route, though the 19-year-old striker is himself attracting interest from some of Europe’s biggest clubs, such is Salzburg’s reputation.

Another reason a move to Leipzig didn’t suit Minamino is that he’s already reached a high level, and on the European stage it’s not too much of a stretch to suggest Salzburg are on the same standing as their German relative.

Minamino can still improve, but Liverpool are not signing a raw young talent. They are signing a player who is already good enough to make an impact in the first team, and one whose desire to develop is something which could take him into that team on a regular basis.

Scouting reports from fans and players

Liverpool fans already know what they like about this player, and the knowledgable Anfield crowd appreciates a good player when they see one even if they are turning out for the opposition.

Some of Minamino’s attributes which are immediately evident are high work rate, good decision making in advanced areas, crisp and creative passing, and a natural quickness in tight spaces as well as some speed across longer distances.

A closer look reveals a right-footed player who will also cross with his left if needed, which will allow him to play on both wings without being predictable.

The data shows he has scored 16 of his 81 career goals with his weaker foot and there are four headed goals for good measure.

He’s a prolific passer, but also a progressive one, which means his pass success rate may not always be high. In the Champions League this season it stands at 77%, for example.

“In terms of his style, Minamino is a very hard-working player with explosive pace and a good eye for a pass,” says Lee Wingate of the Other Bundesliga podcast.

“He can play in a variety of attacking positions but is used most regularly on the wing in Marsch’s 4-2-2-2 system.

“He has also featured at the spearhead of a diamond in midfield and I imagine that at Liverpool he would be used as cover for Mané and Salah in the wide attacking positions.”

The heatmap above shows his ability and desire to cover the whole pitch, as well as being a further indication of his versatility.

His frantic pressing across the park can mean he gives away a foul or two (dare we call them tactical?) but it also means he’ll be highly ranked among forwards when it comes to defensive actions such as possession wins and tackles.

A tendency to drop into midfield also helps him rack up numbers in this area, and also means he’s probably best described as an attacker rather than a forward, which brings us on to comparisons…

Minamino is the next… 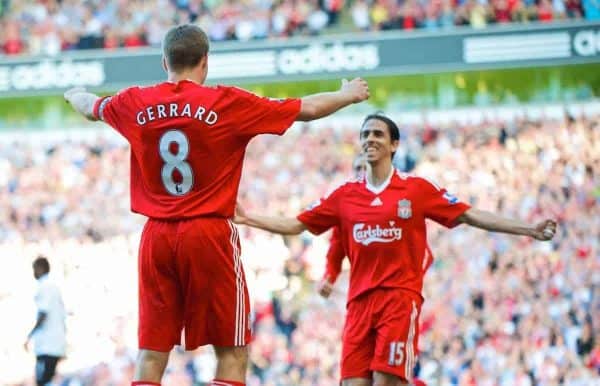 When trying to think of similarities with Liverpool players of the past, a few names from the Rafa Benitez era come to mind, and Minamino is perhaps a combination of three: Yossi Benayoun (but quicker), Luis Garcia (but more engaged), Vladimir Smicer (plus).

In terms of current players, Liverpool don’t really have anyone like him, which another reason he is such a good signing, though you could probably say he’s a much more dynamic and decisive version of Adam Lallana and not be too far off the mark.

He has some of Mohamed Salah and some of Sadio Mane, meaning he could deputise for both players on the flanks of a 4-3-3 if needed, but the most interesting and exciting version of Minamino might be Minamino the Roberto Firmino alternative.

For Japan, he often wears the No 9 shirt and has scored six goals in his last five games for his country. They seem to be in an experimental phase ahead of the Qatar World Cup, and at this stage of the Asian qualifiers they can afford to try a few things out before going into the all-important third-round.

Minamino is often used as an attacking midfielder, alternating with Shinji Kagawa (who himself worked under Klopp at Dortmund), but one who will also move forward to become a second striker as well as occasionally dropping to start attacks.

It’s in these positions for his national team, and when he plays at the head of Salzburg’s 4-4-2 diamond, that his potential to fill in for Firmino becomes a real prospect.

On top of this he’s also played up front for Salzburg on occasions, and though at 174cm (5ft 8in) he’s not quite as tall as Firmino, he arrives with a similar positional profile to the one the Brazilian had at his previous club, Hoffenheim.

The view from Austria 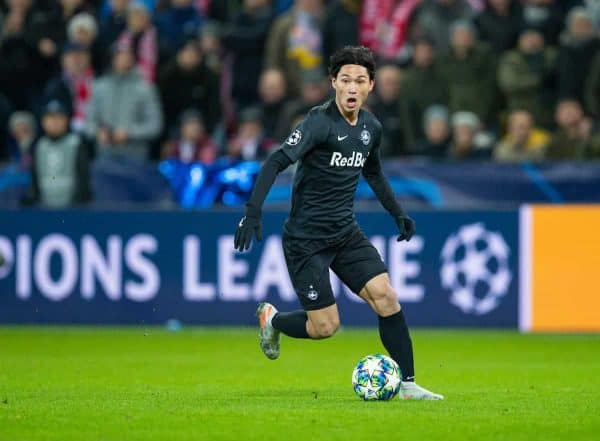 “I have to say I’ve been taken by surprise but how much he has developed since Marsch arrived at the club,” adds Wingate.

“He has always been an impressive player but he didn’t feature as much under the previous coach, Marco Rose, and has only really become a first-team regular this season.

“A head scout spent three weeks observing him while he was at Cerezo Osaka in Japan and then Freund went over for a week to meet him personally.

“Salzburg are extremely thorough in their recruitment and they like to make sure that their new signings have the right mentality as well as the technical attributes they are looking for.”

?? Why @LFC fans should be excited about #Minamino

?? Why the move could be a big blow for @RedBullSalzburg#ChampionsLeague #LFC #UCL pic.twitter.com/iEkhwniyV4

“From my point of view, I would have to say that some elements of the sale are not ideal.

“Firstly, the release clause of £7.25 million means Liverpool are getting a top-class player at a fraction of what his actual value should be.

“Were it not for the release clause, he might have been sold for a price not too far off the €29.75 million that Leipzig paid for Naby Keita, which remains the record outgoing transfer for the Austrian Bundesliga.”

“In addition, the timing is a shame. Salzburg have now dropped down to the Europa League and although there are some big names in there (Benfica, Inter Milan, Manchester United), I think they would’ve had a really big shot at going all the way. But if Minamino and Haaland both leave this winter, their chances will decrease significantly.”

There’s no doubt that he’ll be a big loss to Salzburg, having spent the last six seasons there, and the fee is a disappointing one from their point of view.

But having been signed from Cerezo Osaka for €800,000 it’s still a tidy profit, and the fact a big club such as Liverpool is now buying straight from them should help raise the value of their other talented players, and Freund recognises this.

Liverpool as a club, from the fans to the manager, have never felt so collectively behind a transfer deal and, looking back to his Anfield audition in October, it’s no surprise to see him signed up quickly ahead of other clubs.