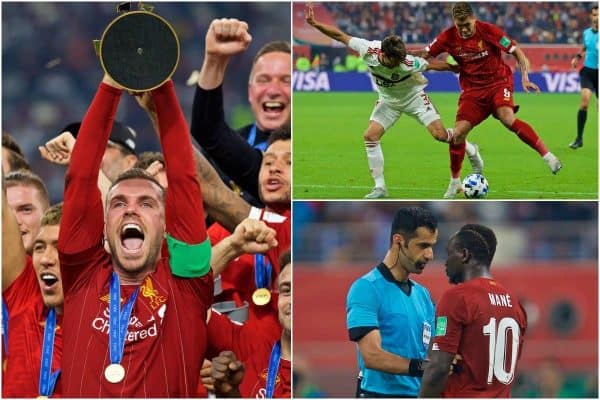 The good, the bad & the World Champions – Debating Liverpool 1-0 Flamengo

Liverpool were crowned Club World Cup champions on Saturday with a 1-0 over Flamengo, a game and result which left a lot to discuss after the final whistle.

The Reds were crowned world champions in Qatar for the first time in the club’s history, with Roberto Firmino‘s strike in extra-time securing the win in what was an eventful and controversial evening.

Liverpool were subject to a questionable outing by referee Abdulrahman Al Jassim whose decision making and game management left a lot to be desired; penalty, free-kick, drop ball – who knows?

Jurgen Klopp‘s side had a multitude of opportunities to find themselves on the scoresheet early in proceedings but they were forced to find the winner in extra-time – a result which takes Liverpool’s silverware tally to three in 2019.

Here, This Is Anfield’s Joanna Durkan (@JoannaDurkan_) speaks to Matt Ladson (@mattladson) and Chris McLoughlin (@chrismackop), who were both in Qatar for the week, to delve into the positives and negatives from the victory and discuss the Reds being officially the greatest team the world has ever seen.

Chris: Being champions of the world is pretty good, especially after sacrificing the League Cup to fly to the desert to win it, but look no further than Jordan Henderson when it comes to picking a man of the match.

The European, Super and Club World Cup-winning captain had an outstanding game in midfield (didn’t hear many people say the Reds were missing Fabinho) and it was his pass that set Sadio Mané away to tee up Bobby to win it.

That wasn’t his only incisive pass of the night either, but the best bit of all was when he walked onto the podium, did the now well-practised ‘Henderson Shuffle’ and lifted the Club World Cup skywards.

Keep lifting this much silver and J.B. Henderson will be rivalling H. Samuel on the high street by next Christmas.

Matt: Not winning this trophy after the chaos it has caused would’ve been tough to take, and as the match progressed I wanted this victory more than ever — although part of that was due to the incompetence of the ref, but more on that later!

Gomez and Henderson were the pick of the Reds on the pitch, and Naby Keita had another good game too I felt. Oh, and Alisson yet again with a couple of big saves.

Credit must go to the Flamengo fans who travelled in huge numbers and created the atmosphere inside the stadium. Non-stop, even when behind and even after full-time. They apparently had 10,000 in Qatar on charter flights alone and their presence in the city was everywhere you went.

Joanna: Pre-game I had very few nerves, the break from the relentless heart palpitations that the Premier League brings was a welcome one – but that soon swiftly changed.

The desire to see us lift another trophy increased minute-by-minute with Flamengo’s antics and the referee – and we did it! Our 47th major trophy in the bag and the third in just over seven months.

Chris and Matt both hit the nail on the head with Henderson’s performance, I was dying for his strike at the end of the 90 minutes to hit the back of the net but his pass through to Mane was something else and ensured another famous trophy lift was in store.

Alisson and Gomez were my next standouts and it is uplifting to see the latter hit his stride after a rocky year.

This team is something else and the fact that those who spoke after the game were quickly eyeing the next piece of silverware says everything you need to know.

Chris: The referee was so bad I thought FIFA must have found him in Qatar or something. Turns out they did.

Now I’m no expert on the Qatari League, but I’m pretty sure it’s not played at the pace the Premier League is and nor is it full of wiley, niggly South Americans.

As a result, we had a ref who was out of his depth, allowed the Flamengo players to get away with all kinds and didn’t even allow VAR to help him. Rafinha’s foul on Mané was either a penalty and yellow card or a free-kick and red card.

I thought it was the latter but no, after tuning into the telly to review his penalty decision, the ref opted for an uncontested bounce ball in favour of the Flamengo keeper, who also found a groundbreaking cure for cramp – conceding the first goal.

FIFA might want to give refs from around the world a chance, but if they want the Club World Cup to be taken more seriously the standard of referring must improve.

Matt: Chris has said it all really. Other than an expletive-filled rant I can’t add much more than that, but the utter failure of the referee to see through the Brazilians’ antics was laughable.

Another mention for the pathetic FIFA MC in the stadium who again ruined the atmosphere, then the long awards that meant the players were just stood waiting for half an hour before they collected the trophy.

Joanna: The guys have said everything about the referee, but boy did he know how to get the blood boiling – I just couldn’t comprehend his thought process.

Flamengo’s antics were equally embarrassing and it’s funny how a goal our way suddenly cured all signs of cramp and time-wasting.

Aside from that, Ox’s injury was the greatest concern to emerge from the game as his initial reaction was one which he resigned himself to the worst possible outcome. Thankfully, he looked in high spirits after the game and Klopp was hopeful, but my heart was in my mouth and fingers crossed it’s nothing too serious.

And what was up with the BBC ending the broadcast before the trophy lift and forcing you to watch on iPlayer and then swiftly cutting it after the initial presentation?!

And Liverpool are World Champions, how does it feel?

Chris: Being champions of the world four days before Christmas is terrible timing. I mean how are they going to get the champions wall at Melwood updated when Dave the handyman is on annual leave to take the kids to Lapland? At least he’s been on overtime this year.

While a lot of people don’t care about the Club World Cup, having been to Qatar this week and experienced it for the first time I have to say that winning it is dead good. Liverpool are European and World champions.

We’ve added a new trophy to the collection. It puts us another piece of silverware ahead of any other English team.

Matt: It feels great. Again, Chris has said it all there really.

We’re the front page of the Middle East newspapers here today and while the competition might not be valued in England, it’s another step towards putting Liverpool firmly on the map globally.

World champions just has a lovely ring to it and now affirms what we all know our team are, the greatest the world has ever seen.

Having never won this competition in the club’s history it is one fans of all generations are enjoying together for the very first time, an experience and feeling you cannot put a price on.