Virgil van Dijk missed Liverpool’s Club World Cup semi-final win through illness and Jurgen Klopp has conceded it is a waiting game as to his availability for the final.

The Dutchman’s absence was the first time he has not been named in a Liverpool squad this season, aside from the Reds’ League Cup commitments.

Liverpool’s No. 4 has been a mainstay at the heart of the defence and his absence amid a handful of key injuries ensured the Reds were forced to think creatively against Monterrey on Wednesday.

Jordan Henderson partnered Joe Gomez in the centre of defence, while James Milner and Andy Robertson were both deployed at full-back.

While Klopp had suggested the Van Dijk was “fine” in his pre-match press conference, the defender succumbed to an illness which ensured he has been unable to train nor take part in the 2-1 win, and now the Reds will have to play the waiting game for Saturday’s final.

“It was an easy decision, he couldn’t train,” Klopp told reporters. 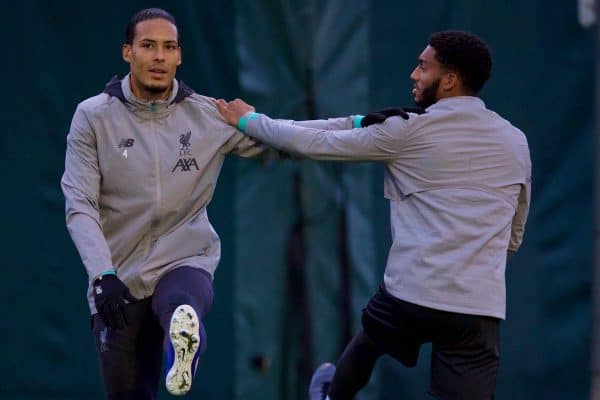 “He was on the pitch a couple of minutes before the media left [on Tuesday], but then he had to leave as wasn’t feeling well.

“Training was not possible this morning. Saturday? We will see, I don’t know. We will see how quick he can recover.

“[It was] difficult for Hendo to deal with, but he did really well.”

While Van Dijk will seemingly slot back into the fold should he recover in time, his absence for the second game running will give Klopp another key decision to make.

Ki-Jana Hoever and Sepp van den Berg were both drafted into the squad following their League Cup exploits on Tuesday, with the former the most likely to take his place in the starting lineup should the boss look to move the skipper into midfield.

A position of the field which is again likely to be without Gini Wijnaldum, who despite travelling to Qatar, is unlikely to have recovered in time from his hamstring injury sustained in the win against Watford.