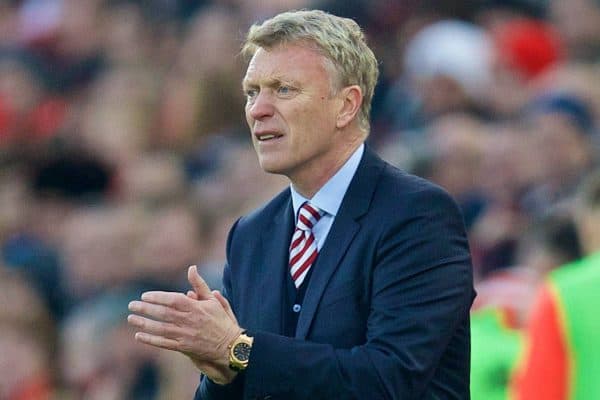 David Moyes has urged his West Ham players to “attempt” a win against Liverpool, but conceded they would need to land a “lucky punch” to do so.

Moyes has endured a difficult start to life back with the Hammers, following up a 4-0 thrashing of Bournemouth in his first game in charge with three defeats and a draw.

Last time out in the league West Ham suffered a heavy loss to Leicester, before being knocked out of the FA Cup by Championship side West Brom on Saturday.

On Sunday, the Scot comes up against a side he has faced the third-most of any in his managerial career, but one that he has rarely beaten, with just five wins from 31 meetings with Liverpool.

Against Jurgen Klopp he has endured two losses and a draw from three games, and on Wednesday night pits his 17th-placed West Ham against the unbeaten, runaway league leaders.

Moyes understandably painted his side as underdogs in his pre-match press conference, describing the Reds as having few weaknesses, instead hoping to land a “lucky” blow at the London Stadium.

“It would be easy to say how difficult the challenge is, but I think it’s a challenge we have to attempt to relish,” he told reporters.

“Nobody at this moment in time has beaten Liverpool so that is something that we have to aim to do. We’ll attempt to do that, but obviously we know their quality.

“I don’t think I can give you too many weaknesses in the Liverpool team.

“From that point of view, I think everybody’s well aware how difficult the challenge is.

“But everybody gets the chance to throw a punch somewhere along the line, and sometimes you can get a lucky one. We’ve got to make sure we get the lucky one.”

Moyes is right to be pessimistic, with West Ham having only won three of their last 17 in the league having not yet faced Liverpool, due to this fixture being moved from December.

However he added that he had “never gone into any game not expecting to win as a manager,” with his priority to take the three points by any means, even if “that’s by a set-piece or a flukey goal.”

This is likely to be the Hammers’ game plan in midweek, but fortunately Liverpool have improved significantly in both defending and attacking set-pieces.

Only Newcastle (12) have scored more goals from dead-ball situations in the Premier League this season (11), while only Burnley (two) have conceded fewer than Klopp’s side (three).

It is a testament to the Hammers’ decline and the Reds’ rise that Moyes is clinging to luck in order to secure a result at home, and Liverpool can be confident heading to east London.