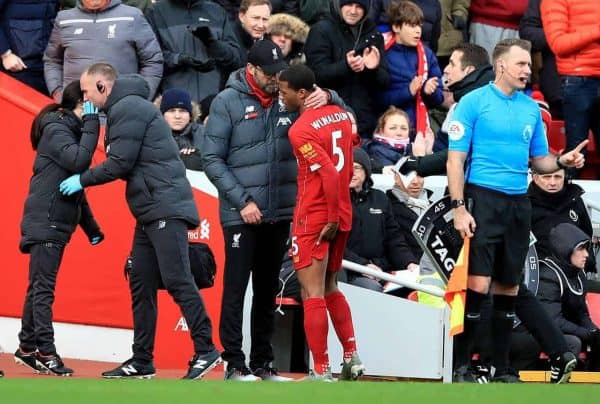 Liverpool manager Jurgen Klopp has repeated his calls for a football-wide agreement on fixture scheduling to prevent players being over-worked.

And he believes coaches and “football people” should be included in the discussion with international and national governing bodies and television companies to ensure a proper solution can be found.

Klopp was speaking after the culmination of a hectic festive Premier League programme which has taken its toll on several sides in terms of the number of injuries they have sustained and the impact on results.

“I told what I had to say to UEFA personally, I told FIFA sometimes in interviews because I don’t know anyone there and I don’t think the Premier League, FA or Football League are in any doubt of my opinion,” he said.

“I just do that not because of me but because I think someone has to speak for the players.

“The boys last night [in the 2-0 win over Sheffield United] ran 13 kilometres—13 kilometres to win a Premier League game—and I cannot tell them ‘come on, try to run 11km so you will be fine for the next game’.

“But the schedule is the schedule. If you have a good friend and you see him twice a year, brilliant. Best time of your life.

“If you see him every day you think after five days, ‘what the heck?’.

“But what we do is throw football at the people. How many games were on Boxing Day? There were maybe some men, probably, who watched all of them live.

“I don’t think that’s good for their relationship. It’s not good for mine and I already watch a lot of football.

“People say ‘yeah, we only get the money we get because of the number of games’. I don’t see that. Like always in life it is about quality not quantity.

Klopp wants all parties to get together and come up with a sustainable plan. He even volunteered to attend—if he had the time.

“The solution is to bring all these people together and try to think one time in all these negotiations about the players,” he added.

“And no-one will miss a game and think ‘oh, why cannot I watch a football game today?’. There will be enough football, we accept that 100 percent.

“We love this game but in the end we have to make sure that we can all come through and in the end the best team wins and not the most lucky with injuries.

“Just start talking and I am pretty sure there is a solution possible. And if you need me in the discussion I am pretty much there—if I can find time in between the games!”