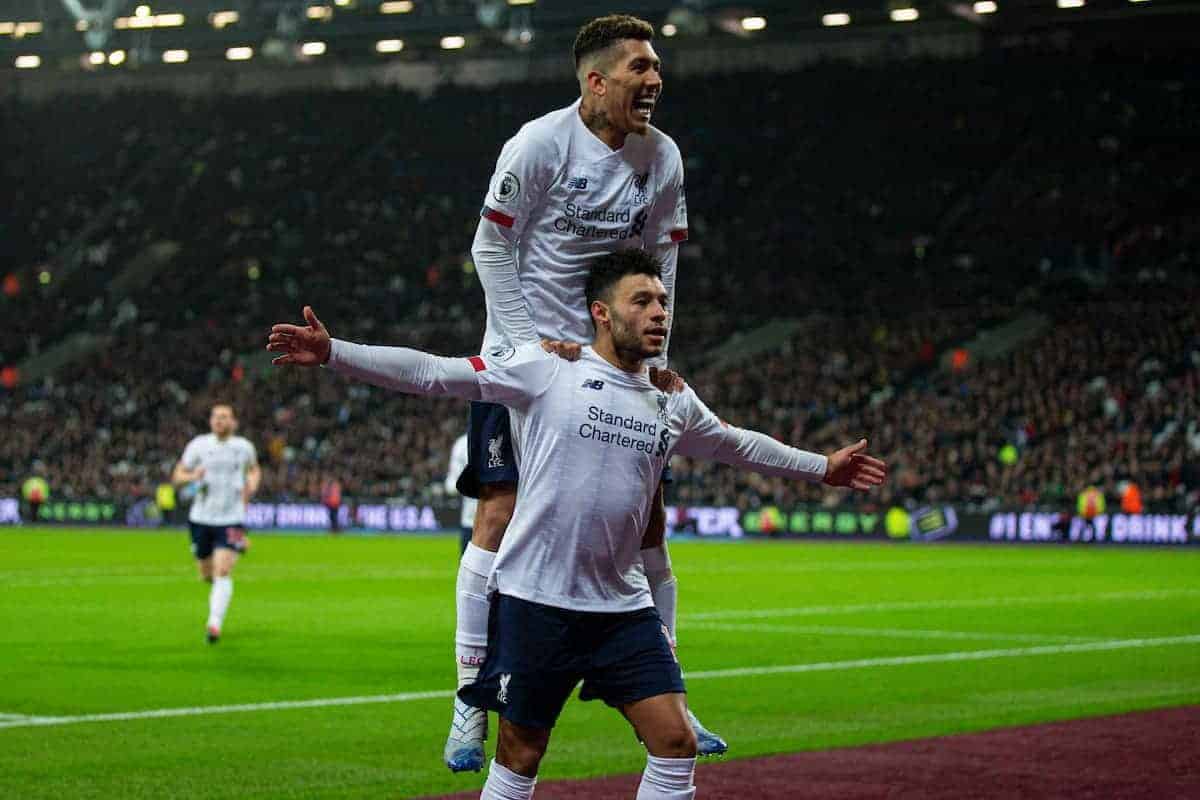 Liverpool moved an astonishing 19 points clear atop of the table with a 2-0 win at West Ham, and fans were rightly in a celebratory mood.

Jurgen Klopp’s Reds made the trip to the capital for a meeting with West Ham, a game which postponed due to Liverpool’s involvement in the Club World Cup.

And it presented a chance to move 19 points clear of Man City after 24 games, and while the Hammers presented a united defensive front Liverpool’s domination on the ball soon reaped its rewards.

After Divock Origi was impeded in the area, Mohamed Salah powered home the resulting spot-kick to hand the Reds a lead heading into the break.

And Liverpool’s leading goalscorer would then turn provider early in the second with a sumptuous through ball to Alex Oxlade-Chamberlain, creating a comfortable two-goal buffer which would remain come the end of the 90.

On another night of key milestones, Salah notched one of his own in an impressive display…

What a penalty, Salah absolutely smashed that in!

Mo Salah has scored each of his last 9 penalties for @LFC since missing at home to Huddersfield in October 2017.

“That pass was super sexy from mo, perfect weight!!”

14 – Since the start of the 2017-18 season, Mohamed Salah has both scored and assisted in 14 different Premier League games, five more than any other player in this period. Handful. pic.twitter.com/qk85KCYaRk

Mohamed Salah is held to such high standards that he notched a goal and an assist and you’re thinking, “he wasn’t near as good as he can be.”

My man of the match is Mohamed Salah, but I'm not doing a usual stats feature post because the numbers aren't very impressive. He was though. There's something to learn from that, I reckon.

Virgil van Dijk could’ve defended Winterfell from the white walkers and there wouldn’t have been any bloodshed. #LFC

“Bobby being his usual brilliant self and creating with his usual flair and work rate.”

Neukolln on the forums.

That goal was made in #Firmino land. 1 out of a million would have thought to bring a cross down like that and then to turn, then play the square pass.

Nah, make that one in a billion. #WHULIV #LIV

That pass from Salah was fantastic. Glad Ox got a goal, deserves one

Efficient performance by #LFC who did not need to be particularly good. Still, Alisson, Gomez, VVD, Henderson and Salah all excellent. Lovely to see a (very good) cameo by Curtis Jones.

There was a need to single Alisson out, however, and shower him with praise after a number of exceptional saves…

Alisson showing his class throughout the game tonight. Saves, distribution and presence.

Alisson could have saved the Titanic if the iceberg was bearing down on goal.

I'm thinking Alisson is worth his price tag.

If anyone ever says Alisson isn’t the best goalkeeper in the world, he’s got the joint most clean sheets in the Premier League.

After missing 8 games this season.

This is #Alisson's 8th cleansheet and is joint top of the golden glove league despite missing two months of the season. He is tied with Pope, Schmeichel, Henderson and Foster. #LFC

Game in hand won. 19 points clear in Jan. Liverpool top the league and they won’t be moved. Klopp understood that game so well, filled the midfield at the perfect time. Out of words for Alisson, world’s best. Has nothing to do all game and produces magic when needed. #LFCdigest

70 points and it’s not even February.

Doubt we’ll ever see this again

Best team in the fucking world

“Best team in the world. No other words are needed.”

And just like that, the Reds go 19 points clear. From back to front this is a peerless team. What Klopp has done in 4 years is nothing short of miraculous

Liverpool are 19 points clear. That is absolutely ridiculous. They have beaten every team in a top-flight season for the first time in the club’s history. Their consistency is astonishing. Rewriting the record books every week #LFC

19 point lead at the end of January. Absolutely phenomenal, 41 matches unbeaten in the Premier League. #WHULIV

More history is made.

Liverpool have become the first team to take 106 points from a run of 38 league games:

Prior to this year, #LFC averaged 1.4 Premier League points per game under Jurgen Klopp in January. They've ended this month having posted five wins from five games (which is an average of three points per game if you can't do the maths).