Rhian Brewster was praised for his off-ball work after debuting for Swansea in a 0-0 draw at Cardiff, as he took “confidence” from a place in the XI.

It came as something of a surprise to see Brewster thrown straight into the starting lineup for the South Wales derby on Sunday afternoon.

The 19-year-old, whose previous senior experience amounted to three games, had joined Swansea four days previous, and his inclusion was a testament to Steve Cooper’s faith in him.

Brewster played the full 90 minutes in a stalemate in Cardiff, and endured a mixed performance: starved of any meaningful chances, he was forced to battle on the periphery.

For Cooper, it was an encouraging display, with the Swansea manager—Brewster’s former boss at England under-17 level—saying he showed “glimpses of his athleticism, his mentality and his willingness to be positive.”

“He started with a yellow card closing down, which tells you everything about him,” Cooper elaborated.

“It was a good experience for him, but he is here to deliver too and I felt he did a good job for the team.

“Of course, we would have liked to create more chances with him on the end of them.

“I know the player, I know his attitude and he will catch the eye for what he does going towards goal.

“But he works so hard, he presses really well. He likes a battle and I know he can handle that part of the league with no problem.” 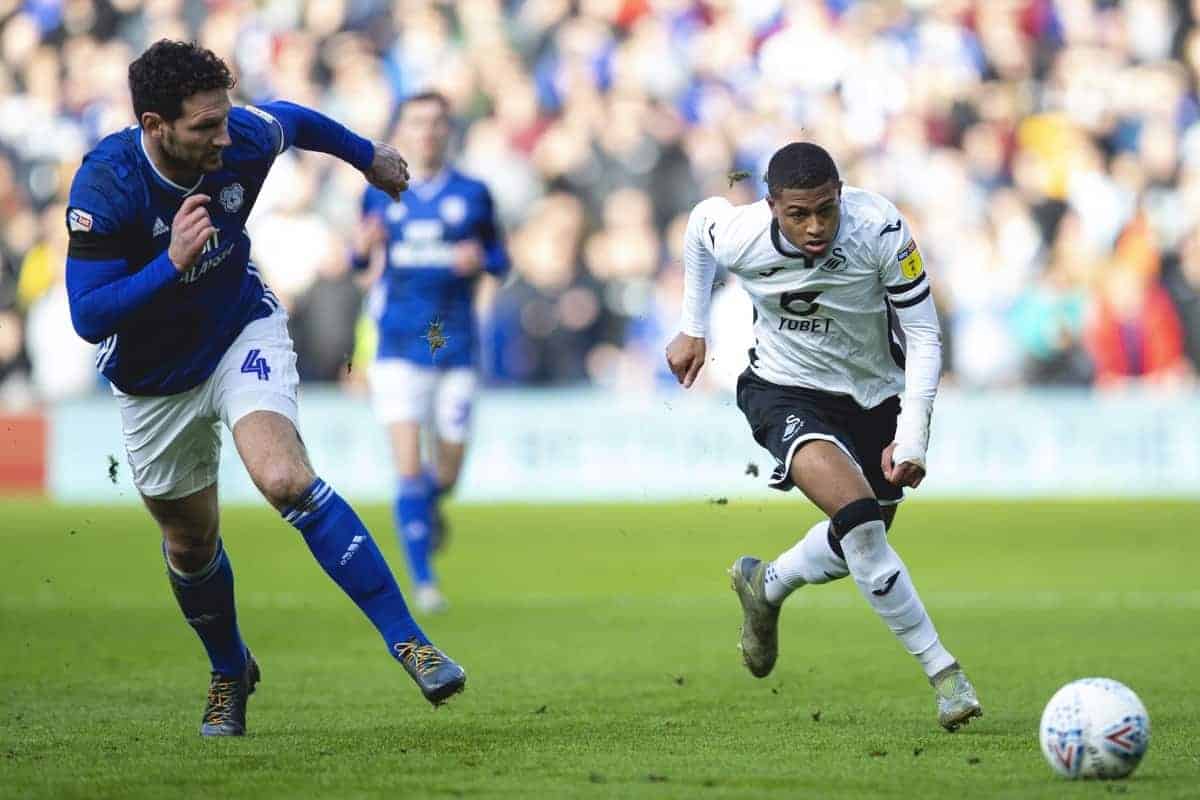 There was a key moment early in the game that saw Brewster challenge for a long ball only to find himself clattered to the turf by Cardiff centre-back Sean Morrison.

Morrison was one of only two players to win more aerial duels than the Liverpool loanee over the course of the 90 minutes, with eight to Brewster’s seven, which reinforces Cooper’s insistence that he can “handle” himself.

But while agreeing with Cooper, the Championship veteran—nearing his 200th game in the English second tier—provided his adversary with some constructive criticism after the game.

“He looks like a top player from a top team, but the Championship is a different kettle of fish from the Premier League and under-23s football,” he explained.

“You can see he’s a good player [but] it’s going to take him time to get used to the Championship.

“I think you could see flashes of his class and movement. I think Swansea have got a good player on their hands.”

Brewster’s own assessment began simply, saying: “I played alright but I feel like I have a lot more to come.”

The youngster pledged that he is “all for the team” and said “I didn’t help them as much as I would have liked,” but this can be expected to improve as he took “confidence” from being “thrown straight into the starting lineup.”

Swansea are next in action on Saturday, when they host Wigan at the Liberty, with the Latics currently two points and one place from the bottom.

Cooper’s side are in contention for a playoff place at this stage of the season, and he will be hoping for goals from Brewster in order to fire the Swans back to the Premier League.