Harry Wilson bounced back to top form with a goal for Bournemouth, while academy goalkeeper Dan Atherton made his senior debut.

2020 has started positively for the loanees, with plenty of game time coming the way of Jurgen Klopp’s borrowed Reds.

Once again the majority of those available featured, but seven loanees did go without match action for various reasons.

Ovie Ejaria was rested as Reading made changes for the FA Cup, while Taiwo Awoniyi and Anderson Arroyo were both unused.

Eight Reds did play though, and there was some good form produced, especially from that man Wilson.

Wilson scored his seventh of the season…

Last weekend saw Wilson suffer his first real low of his time at Bournemouth, subbed after just 34 minutes as the 10-man Cherries slumped to a 2-0 loss at bottom side Norwich.

At the first opportunity, as Bournemouth hosted Brighton in midweek, the Welshman bounced back in perfect fashion, delivering a goal-scoring display to inspire the Cherries to a vital 3-1 win.

Starting on the right of a four-man midfield, Wilson scored the all-important opener on 36 minutes to set his side on the way to a much-needed three points.

After being teed-up by ex-Red Dominic Solanke inside the box, Wilson lifted the ball off the turf with his first touch and rifled a half-volley into the net.

A Pascal Gross own-goal and Callum Wilson strike went on to secure the victory, which was Bournemouth’s first in the Premier League in seven games.

The win also ended a drought for Wilson, whose goal was his first since he netted a brace against Tottenham back in November.

U23s goalkeeper Atherton – who has been with the Reds since he was 12 years old – joined Northern Premier League North West Division club Marine for the remainder of the season.

Despite only signing for the non-league club in midweek, the shot-stopper was thrown straight in for his debut against Brighouse Town on Saturday.

It ended in a 2-2 draw, with Atherton having a mixed first outing on his senior debut in which he didn’t cover himself in glory in the goals he conceded.

Staying with the goalkeeper’s union, 2020 hasn’t started quite as Loris Karius will have hoped.

The German has conceded 10 goals in four games since the campaign restarted, with Besiktas having lost all four; the latest of which was a 2-1 defeat to Goztepe on Sunday in the SuperLig.

That came after Karius’ side suffered a humiliating elimination from the Turkish Cup in midweek after losing both legs 3-2 to second division outfit BB Erzurumspor.

From Turkey down to Germany, Marko Grujic played the full 90 as Hertha Berlin bounced back from last week’s 4-0 drubbing by Bayern Munich with a last-gasp 2-1 win at Wolfsburg on Saturday.

Unlike the German top flight, the 2. Bundesliga season has not yet recommenced, but Nat Phillips played in Stuttgart’s final winter friendly against domestic rivals Dynamo Dresden.

The centre-back played all 90 minutes as his side signed off with a 3-1 win, which will hopefully earn Phillips a starting role for the competitive restart in midweek. 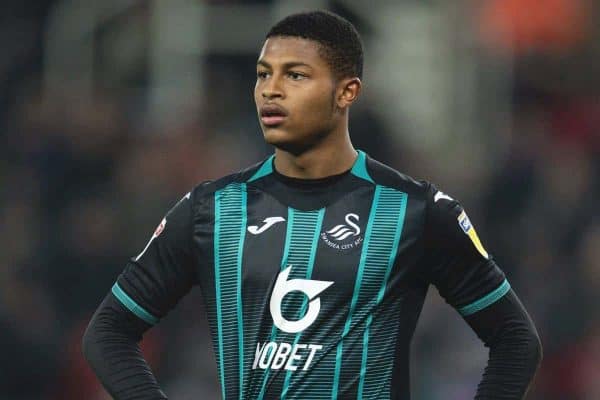 Three Reds were also in action in England and Scotland.

Rhian Brewster made his third consecutive start for Swansea but was unable to hit his second goal in as many games as he played the full 90 minutes in a 2-0 loss at Stoke.

In the FA Cup, Herbie Kane went one better as he made his fourth consecutive start as Hull City exited the competition despite a spirited performance in a 2-1 loss to Chelsea.

Finally, Sheyi Ojo had to settle for a third successive late sub appearance as Rangers’ title hopes took a blow with a 2-1 loss at Hearts, which leaves Steven Gerrard’s side five points adrift of rivals Celtic.