Jurgen Klopp has made just one change to his side in the Premier League for Liverpool’s clash with Norwich.

After a two-week absence for the winter break, the Reds’ senior figures take to the field for the first time since the 4-0 win over Southampton.

With a near-full squad at his disposal following the return of Sadio Mane and James Milner, the boss had a number of options at his disposal for the clash which sees the league leaders meet the cellar-dwellers.

But despite Norwich’s position, Klopp is under no doubt that Liverpool “will feel their quality” in what is set to be a blustery affair at Carrow Road.

And he has named a strong XI as the Reds bid to secure their 25th win from 26 games, on what is Klopp’s 250th game at the helm.

At the back, the winning formula remains intact with Alisson to sit behind the quartet of Trent Alexander-Arnold, Joe Gomez, Virgil van Dijk and Andy Robertson – a defensive unit which has conceded just one goal in their last eight games.

Jordan Henderson moves back into the No. 6 role, with Gini Wijnaldum sat alongside him as Fabinho drops to the bench, with Naby Keita making just his third starting appearance in the league this season.

And Klopp has erred on the side of caution as Mane starts from the bench, ensuring Alex Oxlade-Chamberlain retains his place in the side after back to back appearances on the scoresheet.

Mohamed Salah and Roberto Firmino make up the remainder of the forward line, where Liverpool’s No. 11 will no doubt be out to notch his fifth goal in as many games.

With a healthy squad across the board, Klopp will also have the likes of James Milner, Adam Lallana, Divock Origi and Dejan Lovren to call upon from the substitutes’ bench. 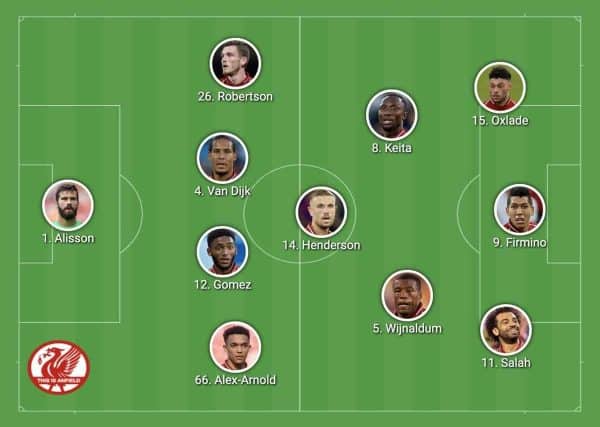