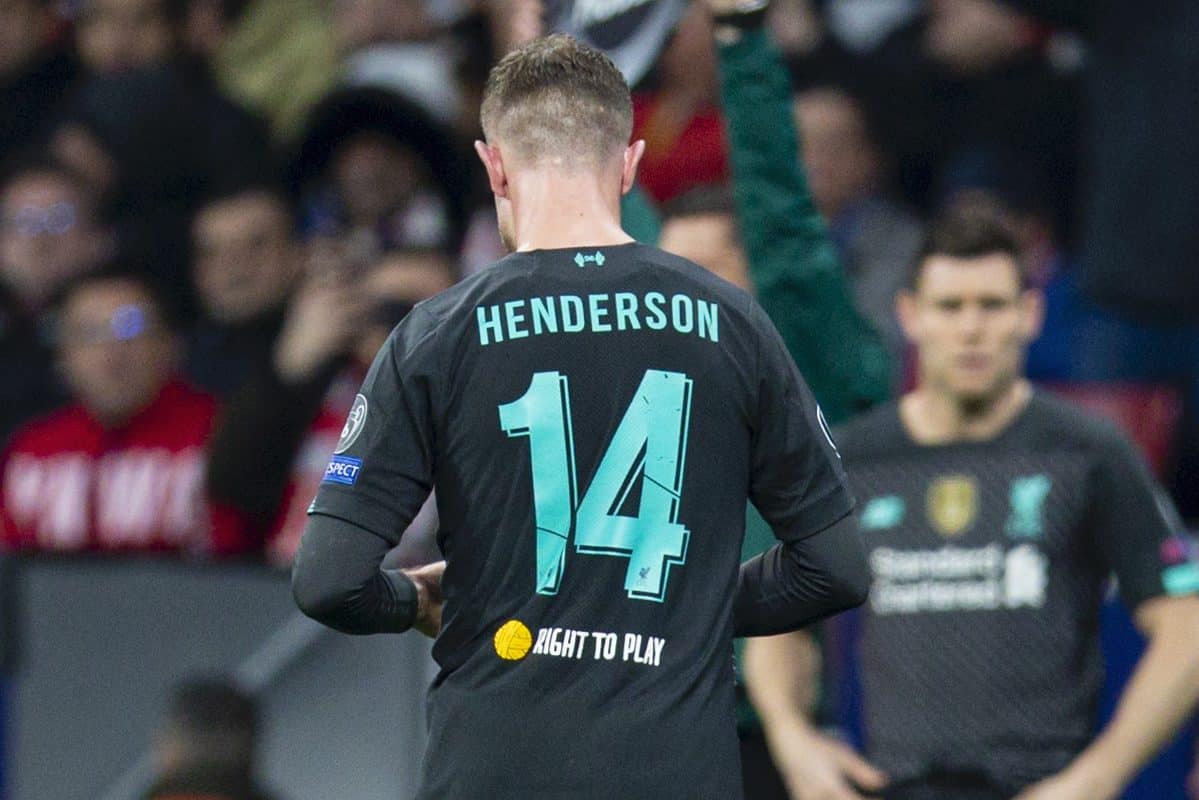 Jordan Henderson is set to miss at least “three weeks” of action with a hamstring injury, depriving Liverpool of their captain and one of their most in-form players for a minimum of four games.

The 29-year-old was forced off late into the Reds’ 1-0 loss at Atletico Madrid in the Champions League, and underwent a scan on Friday.

Initially, Klopp said “I hope it’s a precaution” as Henderson “wasn’t too concerned” when he was substituted, however, the boss has now confirmed the skipper could be out for at least “three weeks.”

“It could have been worse, it was a hamstring, it’s not that bad,” Klopp told reporters ahead of the league outing against West Ham.

“But he will be out for three weeks or so, which is not cool. But how we see it is that we were lucky.”

The timeline would see Henderson miss the visit of West Ham and Bournemouth in the Premier League in addition to the trip to Watford and the fifth round of the FA Cup against Chelsea.

Atletico Madrid’s visit on March 11 is on the cusp of the three-week period and if he was unable to feature in the decisive last-16 tie, he could then also miss the trip to Everton which falls five days later.

It is a period of time which has been pencilled in for Liverpool to officially secure the title, as the Reds need five more wins, should Man City collect maximum points – with Crystal Palace‘s trip to Anfield the fifth fixture in the list.

Additionally, should Liverpool err on the side of caution Henderson could remain out of action until after the international break, which falls after Palace’s visit, where he would also be likely to miss England’s fixtures against Italy and Denmark.

It is the latest in a series of hamstring injuries for the Reds this season, with Sadio Mane and James Milner most recently sidelined with similar problems.

Mane missed two games while Milner was absent for five in the league, with Liverpool utilising the winter break to allow the pair to return to full fitness.

Henderson has no similar luxury, with the schedule increasingly intense as Klopp eyes a first-ever Premier League title, and continued success in the Champions League.

Next up is the visit of West Ham in the league on Monday night, with five more wins required to clinch the title, provided Man City avoid dropping further points.