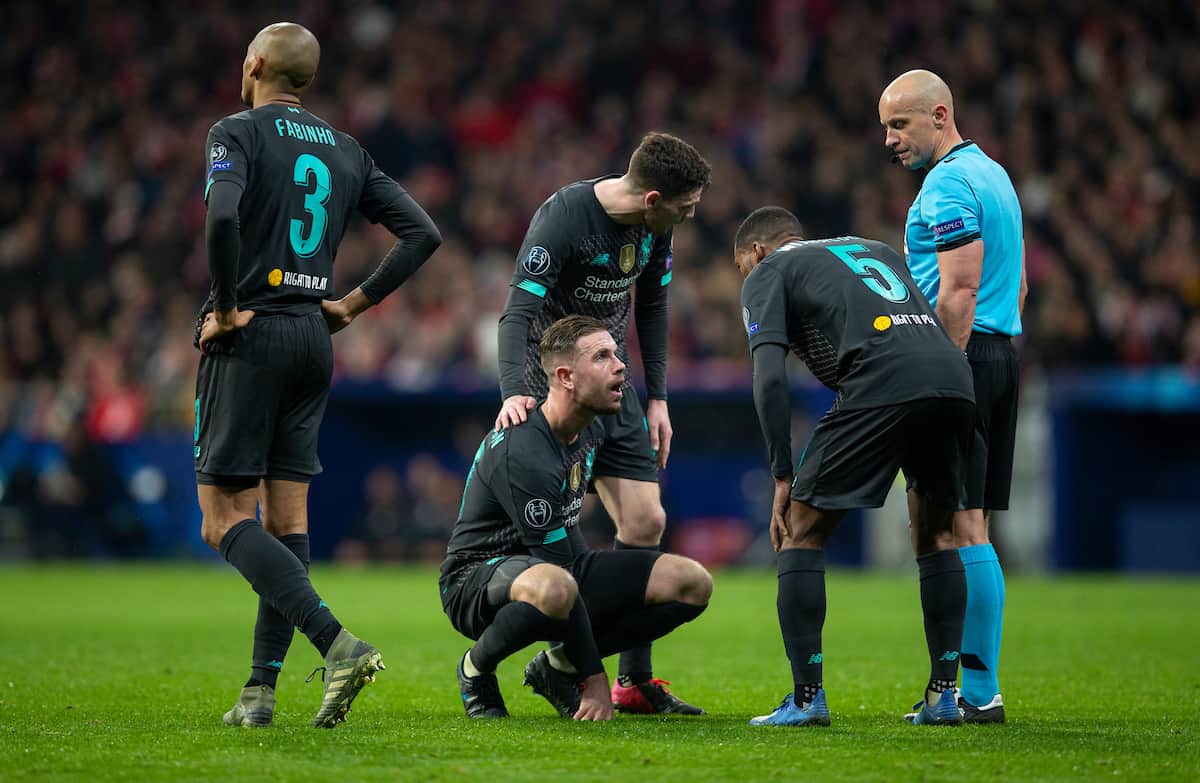 Jurgen Klopp confirmed Jordan Henderson sustained a hamstring injury in the defeat at Atletico Madrid, but he hopes it was just a “precaution.”

After a tough clash at the Wanda Metropolitano Stadium which saw the Reds succumb to a 1-0 defeat, Klopp’s night was delivered another blow in the form of his skipper’s fitness.

Henderson on his 15th consecutive start, aside from Liverpool’s pursuits in the FA and League Cup – stretching back to the win at Bournemouth in early December – ended his evening with a forced substitution.

With the Reds pushing for an equaliser in the latter stages, Henderson dropped to the turf with 80 minutes on the clock in visible discomfort with Fabinho immediately signalling for a change.

And the boss confirmed after the game that he “felt a hamstring,” but at this stage is in the dark as to the severity.

“He felt a hamstring. I hope it’s a precaution but I’m not 100 percent sure, we will have to see,” Klopp explained.

“He wasn’t too concerned but he had to come off.”

In the mixed zone after the game, however, Goal‘s Neil Jones commented that Henderson was “limping quite badly” and the skipper was “not sure” on how bad the extent of the injury is.

With a relatively clean bill of health across his squad prior to the trip to Spain, should Henderson be forced into a temporary absence, there are plenty of options at Klopp’s disposal in the meantime.

James Milner came on for Henderson, while the likes of Alex Oxlade-Chamberlain, Naby Keita, Takumi Minamino and Adam Lallana are all waiting in the wings.

Meanwhile, Sadio Mane‘s withdrawal at half time had nothing to do with his recent return from an injury layoff but rather the deliberate targeting from Atletico to make Liverpool’s No. 10 see red.

“It’s part of football, I don’t like it, but the plan was to get Sadio out the game with a second yellow game,” he explained.

“I was a little afraid the opponent went down even if Sadio had a deep breath. I didn’t want that situation, that’s why I took him off.”

Klopp was clearly irked by Atletico’s antics and the referee’s ineptitude, a referee he also criticised after the game away to PSG last season.