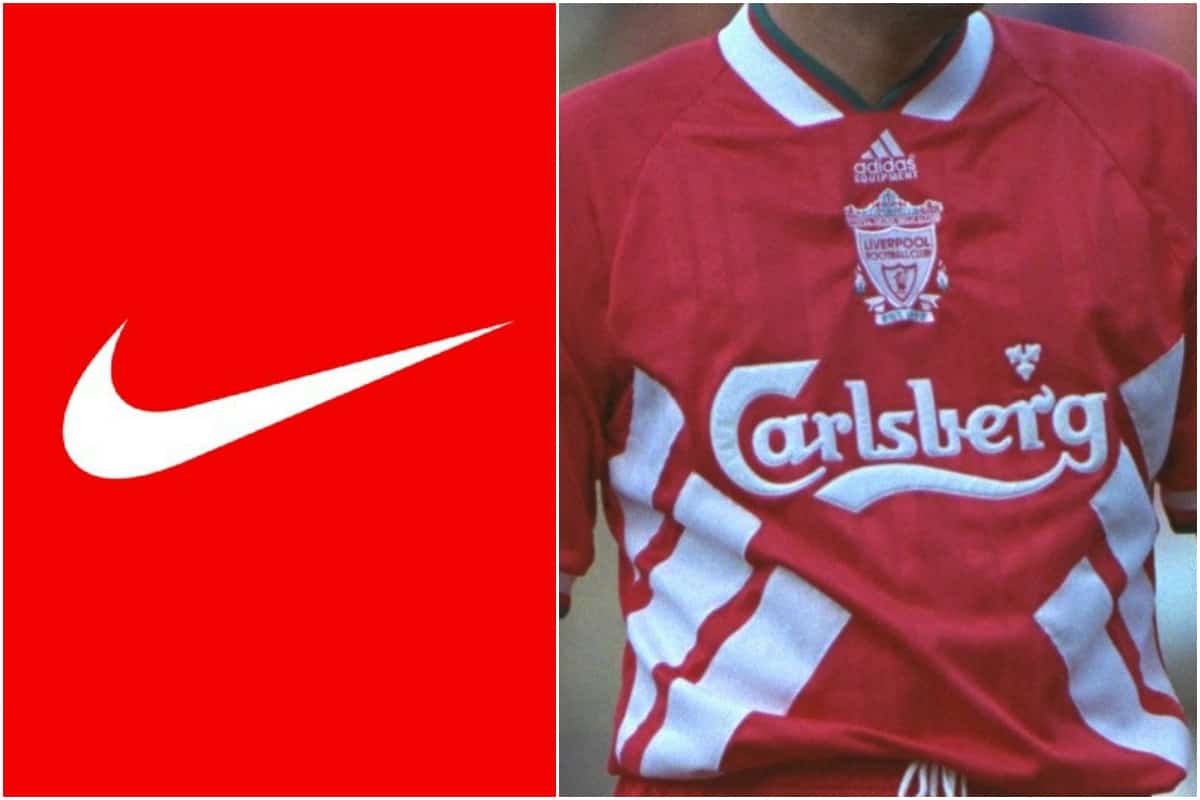 More details have emerged over Liverpool’s rumoured first kit with new suppliers Nike, with its inspiration possibly taken from a shirt from the 1990s.

The Reds are in their last campaign in New Balance shirts, with Nike agreeing a lucrative deal to begin supplying kits from the 2020/21 season.

Designs are already agreed between the two parties, with merchandise to be sold in over 6,000 ‘doors’ worldwide, securing the club a considerable boost on the initial £30 million-a-year payment from their new partner.

Indeed, the deal could earn Liverpool a projected £100 million every season, which would be close to Real Madrid’s world-record £110 million-a-season terms with Adidas.

Liverpool should begin next term as Premier League champions, and according to the reliable Footy Headlines, they will do so wearing a deep red similar to Portugal’s home shirt for the World Cup in 2018.

Furthermore, they “confirm” that this will be complemented by white and teal, which they explain will feature “on the collar and sleeve cuffs.”

Footy Headlines have provided an example of the colour scheme on their Instagram, which shows how the white-and-teal cuffs could look alongside the traditional red:

??? LEAKED: Colors for the Nike Liverpool 20-21 Home kit – more on footyheadlines.com? ? Thoughts on the addition of teal? ? Drop us a line below.? ? #nikefootball #liverpoolfc #premierleague

This could be inspired by the home shirts Liverpool wore in 1993/94 and 1994/95, which saw white detailing over the Adidas shirt and a teal/green edging to the collars and cuffs.

Roy Evans took over from Graeme Souness midway through the 1993/94 campaign, and the Reds won the League Cup wearing the shirt in 1995, beating Bolton 2-1 at Wembley.

They also wore it for a pre-season clash with Iwisa Kaizer Chiefs in Johannesburg in 1994, before which John Barnes led the squad in a meeting with Nelson Mandela. 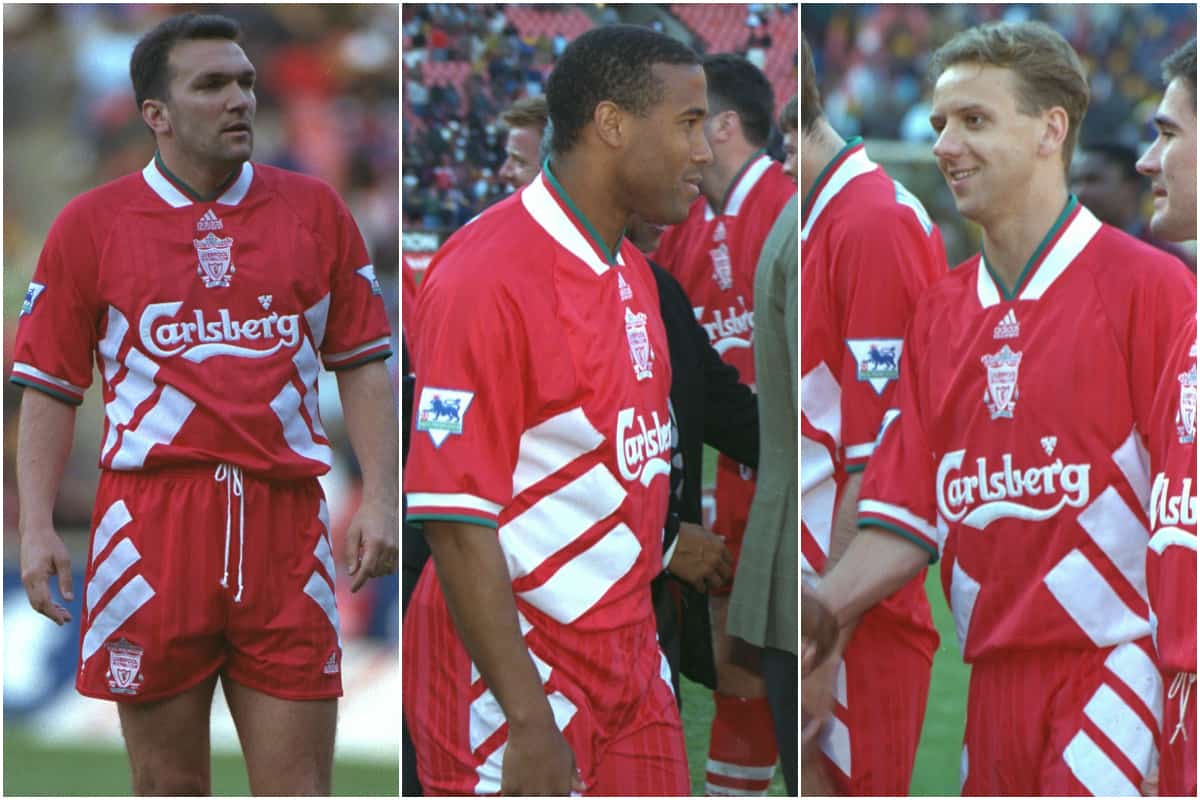 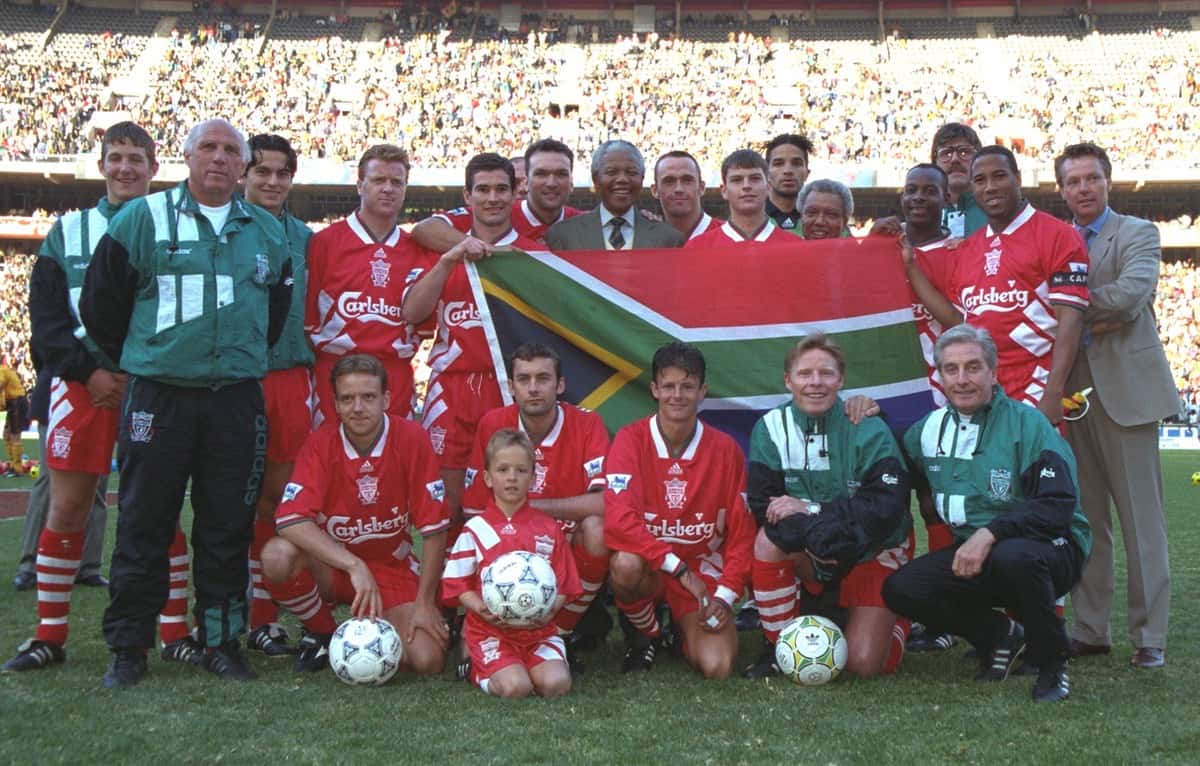 It is safe to say Nike would produce a decidedly more ‘modern’ design, with Footy Headlines speculating that it could be similar to the recently leaked Barcelona and Tottenham shirts for next season, with an overlapping V-neck collar.

Of course, this remains purely speculation, with Liverpool and Nike unable to unveil their new-look kits until the deal with New Balance ends on June 1.

Previous information has suggested the away kit will be ‘hyper turqoise’, which could be similar to the shirt from 1992/93, while the third kit is expected to be “dark grey, most likely with a subtle black checker pattern, and pinkish red logos.”

Footy Headlines have also claimed that Liverpool could announce a fourth kit for 2020/21, which would be white, with black accents and the same “pinkish red” for logos.