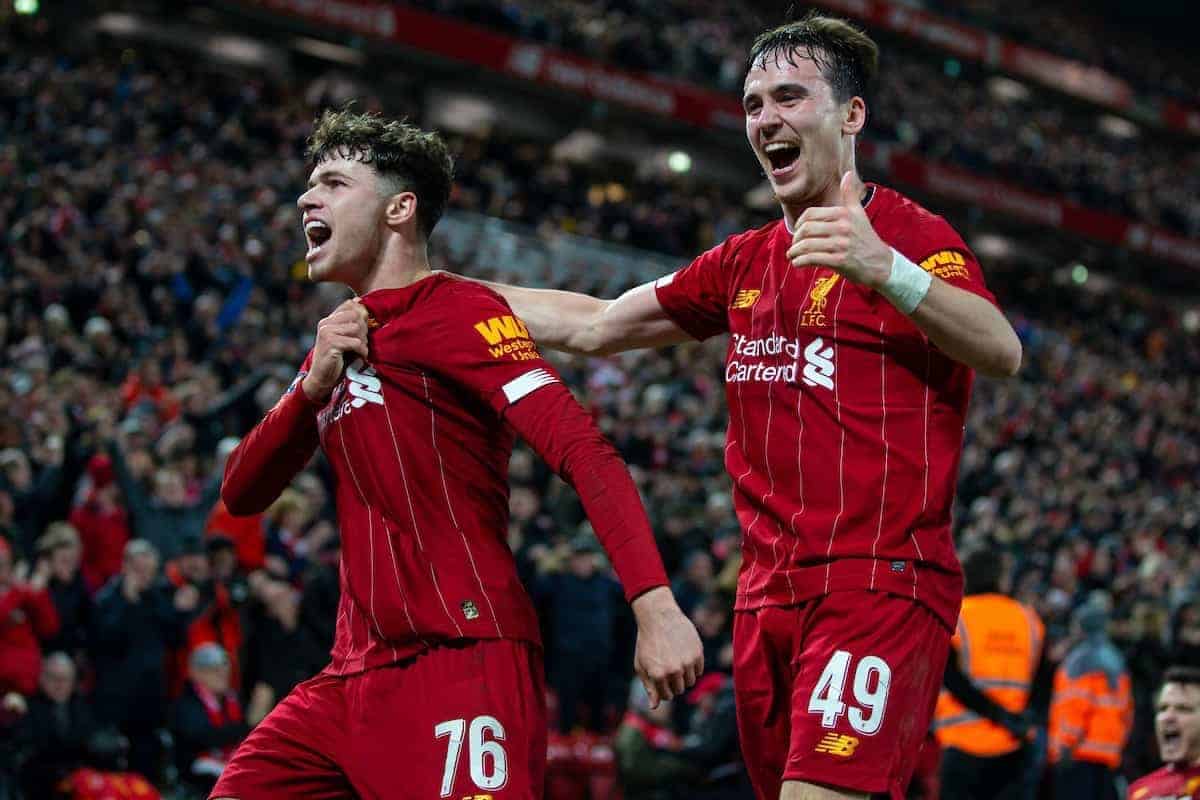 Liverpool’s youngest ever side did themselves proud on Tuesday night, winning 1-0 at home to Shrewsbury Town to reach the FA Cup fifth round.

Controversy had surrounded the Reds’ fourth-round replay at Anfield, following Jurgen Klopp‘s decision to avoid the game, along with his senior players.

The Liverpool manager will have watched on with pride, however, as the hosts edged out their League One opponents in front of a full house.

Former Man United youngster Ro-Shaun Williams’ own goal separated the two sides in the end, and the Reds were fully deserving of their win.

Here we compare our player ratings with those from the Liverpool Echo, the Mirror, The Redmen TV, the Independent and the TIA readers. 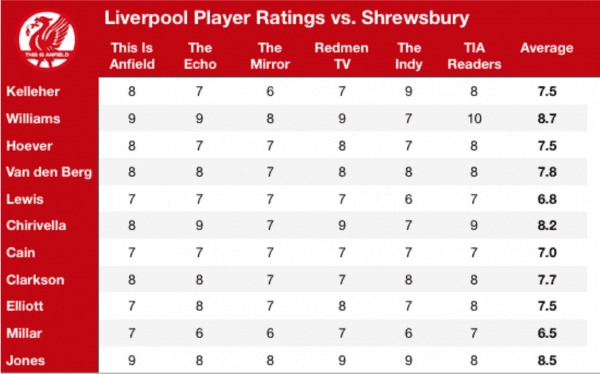 Neco Williams (8.7) earned the highest average rating, as the Welshman again showed why he could be a long-term deputy to Trent Alexander-Arnold.

The 18-year-old not only played a huge part in his namesake’s own goal, firing a long ball into the penalty area, but he shone in all facets of his game.

TIA’s James Nalton gave Williams the Man of the Match award, highlighting that he “had more efforts on goal than any other player.”

Ian Doyle of the Echo believes the right-back is “establishing himself as a crowd favourite,” praising his “excellent” pass in the lead up to the goal.

Curtis Jones (8.5) was next up on a night that saw the 19-year-old become the youngest captain in Liverpool’s history.

The Mirror‘s David Maddock thought it was “easy to see” why Klopp thinks the teenager will soon be a first-team regular, with the midfielder producing one outrageous rabona cross in the first half.

Meanwhile, The Redmen TV lauded Jones, saying he was “everywhere in the attacking third” and “demanded the ball at every given chance.”

In third place was Pedro Chirivella (8.2), who has become something of a cult figure at Anfield, performing impressively in a deep-lying midfield role.

alton thought the Spaniard was “good tactically” and Doyle felt his experience was “crucial in the closing stages.”

Liam Millar (6.5) got the lowest average, but the Reds’ first-ever Canadian player still put in a good shift in attack.

Maddock praised the youngster for his work ethic in a “thankless role,” while Redmen TV hailed his “persistence” on a memorable evening for the Reds.

There is now an 10-day break until Liverpool play again—what will we do with ourselves?—with the Reds visiting Norwich in the Premier League on February 15.