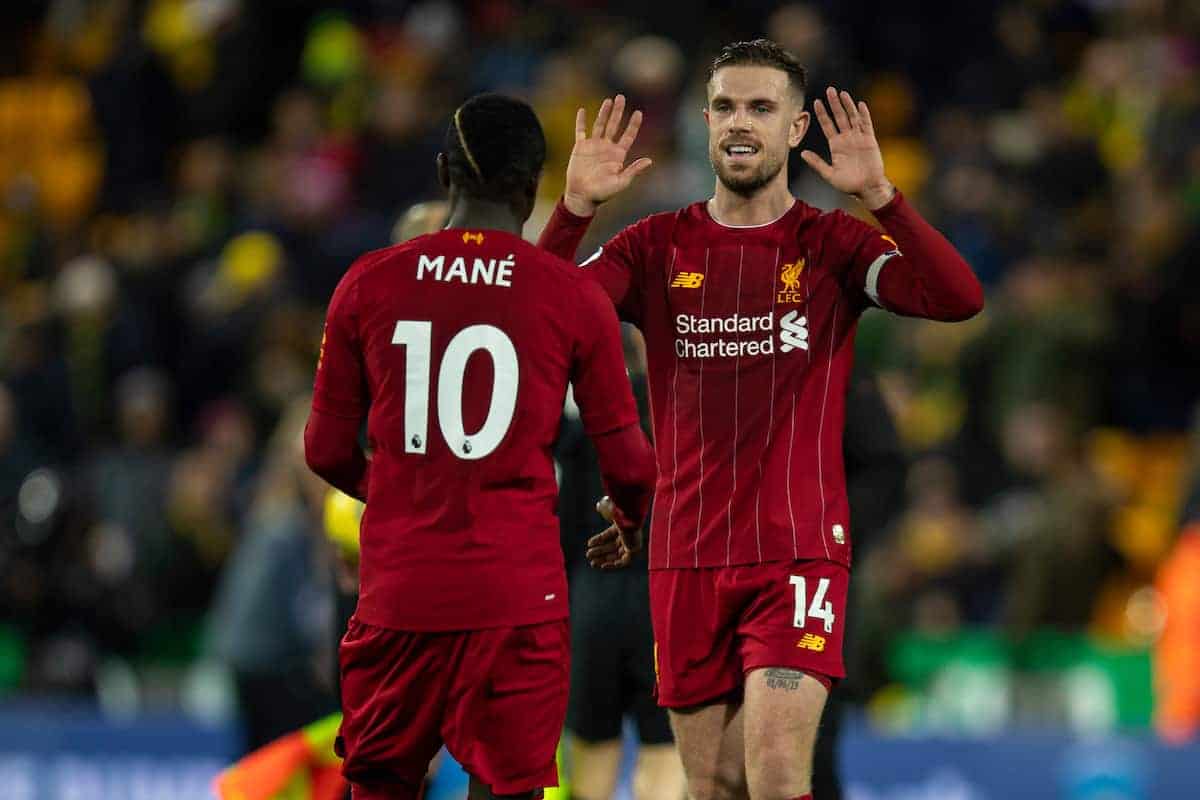 On a blustery evening at Carrow Road, Liverpool grafted and clawed for openings against an impressive Norwich side, with quality in reserve sealing the 1-0 win.

Mane’s the Wind Beneath Klopp’s Wings

After Storm Ciara ravaged the Premier League in the first weekend of the winter break, it was the turn of Storm Dennis to threaten quality and even participation in its second.

There was little chance of Liverpool’s visit to Carrow Road being called off, but winds of 60mph were promised at kickoff, which could have played into Norwich‘s hands.

To their credit, neither side altered their approach significantly, with the Reds still opting for long, raking balls forward whenever possible, and largely this paid off.

Wind has long been an issue Jurgen Klopp has highlighted in his tenure as manager on Merseyside, and often in a mocking tone by rival supporters, but it arguably aided Liverpool this time.

It took the quality of Sadio Mane to pluck Jordan Henderson‘s lofted pass down, and unlike Roberto Firmino in the first half he was able to complement his expert control with a emphatic finish.

A Familiar Night for Naby

Naby Keita‘s Premier League career has a strange and impressive distinction, with the Guinean yet to suffer defeat in the English top flight, and his 33-game unbeaten streak the longest in the league’s history.

But as with on Saturday night, it is a competition he has rarely fully convinced in, with moments of artistry meshed with spells of anonymity.

His inclusion was understandable: it allowed Fabinho to rest, while his on-the-deck approach suited the conditions, allowing Liverpool to keep it down in midfield when required.

Only Trent Alexander-Arnold (110) had more touches than the 25-year-old (93), and he went close with a blast from outside the area, but fluffed his marquee moment.

With Tim Krul spilling a shot into his path in the six-yard box, Keita contrived to fire his follow-up shot straight at the goalkeeper, with a lack of composure depriving the No. 8 of another confidence-booster.

It should be noted, however, that this was Keita’s first start since Boxing Day, with only three substitute appearances coming between, and he was far from the worst player on the pitch.

A performance to build on for Naby.

Liverpool’s No. 1 was one of the most talked-about players of the winter break, having joined his brother Muriel in training at Fluminense, and receiving praise from past and present members of Liverpool’s goalkeeper’s union.

Andy Lonergan labelled him the “the most humble guy I have ever met,” while Simon Mignolet described him as a “complete goalkeeper,” adding: “I don’t see anyone better in the world.”

Unlike his opposite number on Saturday, Alisson is rarely required to make more than one or two saves a game—but when he is called upon they are invariably worth the £65 million spent.

His most telling contribution at Carrow Road was one few goalkeepers would be able to produce, despite its relative simplicity; with two Norwich forwards bearing down on goal, he was able to dive and somehow claw away the squared pass to deny a tap-in.

It was a moment of almost unbelievable conviction that kept Liverpool in the game in the first half, and it is no rarity for the world’s best stopper.

A word of praise for Krul, too, with the Dutchman assured as ever between the sticks for the Canaries, as Ronald Koeman watched on from the stands.

On a night that saw Liverpool go 25 points above Man City—who are now staring into a self-induced abyss—it is worth acknowledging that Norwich are one of the sides to deliver the biggest blows to the defending champions.

Unlike in their Premier League opener at Anfield in August, the Canaries lived up to their billing as a dangerous side who, as Klopp explained in his pre-match address, “stick to their principles.”

The 21-year-old was fouled as many times as the entire Liverpool side combined (five), with his deft movement, dribbling ability and eye for a pass troubling the Reds throughout.

Cantwell is representative of Farke’s ethos, and though it would be disappointing to see him leave if Norwich do suffer relegation, it would also be no surprise if he was on Klopp’s radar, particularly with Adam Lallana set to leave.

Ahead of the game, Klopp welcomed the benefits of recovery and recharging in the winter break, and cherished a near fully fit squad, with “good options” to choose from.

The manager threw something of a curveball by omitting Fabinho from his starting lineup, while caution was taken with Mane following his hamstring injury, with one eye clearly on the trip to Atletico Madrid on Tuesday night.

Such is the quality at Klopp’s disposal at this stage—which he described as “the decisive part of the season”—that neither Joel Matip or Takumi Minamino were named in the squad at Carrow Road.

Changes could be made at the Wanda Metropolitano, with Keita and Alex Oxlade-Chamberlain the most likely casualties, and with hopes of a quintuple increasing the ability to rotate and continue to freshen things up is vital.

Atletico will be a much different proposition, and the solidity of Fabinho and end product of Mane could be crucial, and would vindicate Klopp’s big calls in Norfolk.