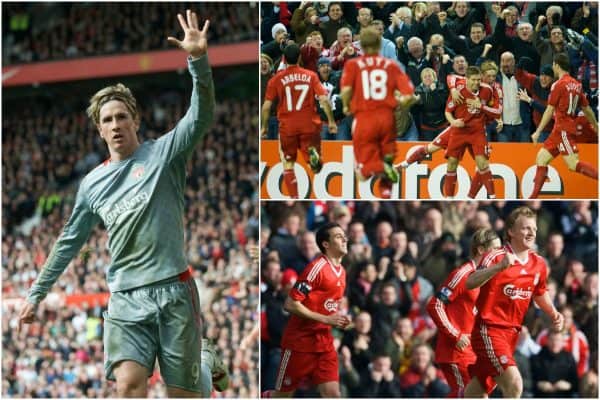 Thumping victories over Real Madrid, Man United and Aston Villa arrived in a matter of just 12 days in what was one of the most memorable run of fixtures for Liverpool.

In 2008/09, Liverpool had assembled a side that would be remembered as one of the Reds’ best teams to never clinch the league title.

Rafa Benitez’s side had a spine to be envious of: Pepe Reina, Jamie Carragher,  Javier Mascherano, Xabi Alonso, Steven Gerrard and Fernando Torres.

And while the campaign would fail to see silverware added to the cabinet after falling short in four competitions, a run of results from March 10 to March 22 would live long in the memory.

It all, of course, started with a date with Real Madrid at Anfield which came 13 days after the Reds secured a 1-0 win at the Bernabeu thanks to Yossi Benayoun’s headed effort in the 82nd minute.

And when you ask you shall receive, and receive Real Madrid did as Fortress Anfield embraced the challenge and burned brightly throughout – a show of power which was replicated by Benitez’s men in one of the most memorable evenings under the Spaniard’s tutelage.

“Liverpool were free of any dilemma…This was an assertiveness not normally associated with Benítez but the manager had made no mistake in diagnosing incompetence in the Real ranks,” The Guardian had surmised.

The Reds had burst out of the gates and while Fernando Torres got the party started with a strike in the 16th minute, the breakthrough could have arrived a lot sooner.

And while the call to award Liverpool a penalty was dubious after Alonso’s pass bounced off the chest of Alvaro Arbeloa and on to the shoulder of Gabriel Heinze, Gerrard did the honours.

Gerrard would add another after the break and even Andrea Dossena found himself on the scoresheet late in the piece to inflict a humiliating 5-0 on aggregate defeat for Real, which could have been worse had it not be for Iker Casillas.

“Real were not just beaten, they were pummelled into submission by a Liverpool side which grabbed their illustrious opponents by the scruff of the neck and never let go until all signs of life had been squeezed out of them,” Tony Barrett wrote for the Liverpool Echo at the time.

The emphatic victory would set up a quarter-final tie with familiar foes Chelsea which dramatically ended 7-5 on aggregate to end Liverpool’s European campaign.

But before the Reds could continue their Champions League charge, another mesmeric performance followed merely four days later as momentum was carried to Old Trafford for a showdown of epic proportions.

The Reds were in a tight and tense tussle with Alex Ferguson’s United in the Premier League title race, but they would go on to rip them to shreds as they dished out yet another humiliating defeat for their opposition.

It was a nightmare in the “Theatre of Dreams’ which had started with a successful penalty from Cristiano Ronaldo only for Fernando Torres, Steven Gerrard, Fabio Aurelio and Andrea Dossena to all score as the Reds sliced through United’s formidable backline at will.

It was the first time Ferguson’s side had tasted defeat at home for more than a year and was Liverpool’s greatest winning margin over their fierce rivals since 1936.

Those of the Liverpool persuasion were rightly euphoric, Ferguson went missing and no one can forget Torres’ five-finger salute, Gerrard’s camera kissing and Nemanja Vidic on the wrong side of a red card once more.

With a wave of momentum on their side no team was safe, with Aston Villa the next to feel the wrath of Benitez’s men.

Eight days after their annihilation of Man United, a return to Anfield was on the cards and Liverpool picked up from where they left off as Dirk Kuyt had the Reds in the lead with less than ten minutes on the clock.

The Villa side, which included James Milner, were swept aside with ease as Gerrard continued his rich vein of form with a hat-trick, two of which were from the penalty spot, as Albert Riera also got in on the act.

The 5-0 thumping saw Liverpool move to second place in the table and just a single point behind United with eight games remaining.

And while belief was at an all-time high that the Reds could reel United in at the top of the table thanks to their formidable form, Liverpool would ruefully retain their place in second until the final day of the season as crippling draws and a lack of squad depth would prove key.

The whirlwind run of fixtures, however, which saw Real Madrid, Man United and Aston Villa chewed up and spat out is one which is fondly remembered and one which saw Liverpool at their greatest under Benitez.