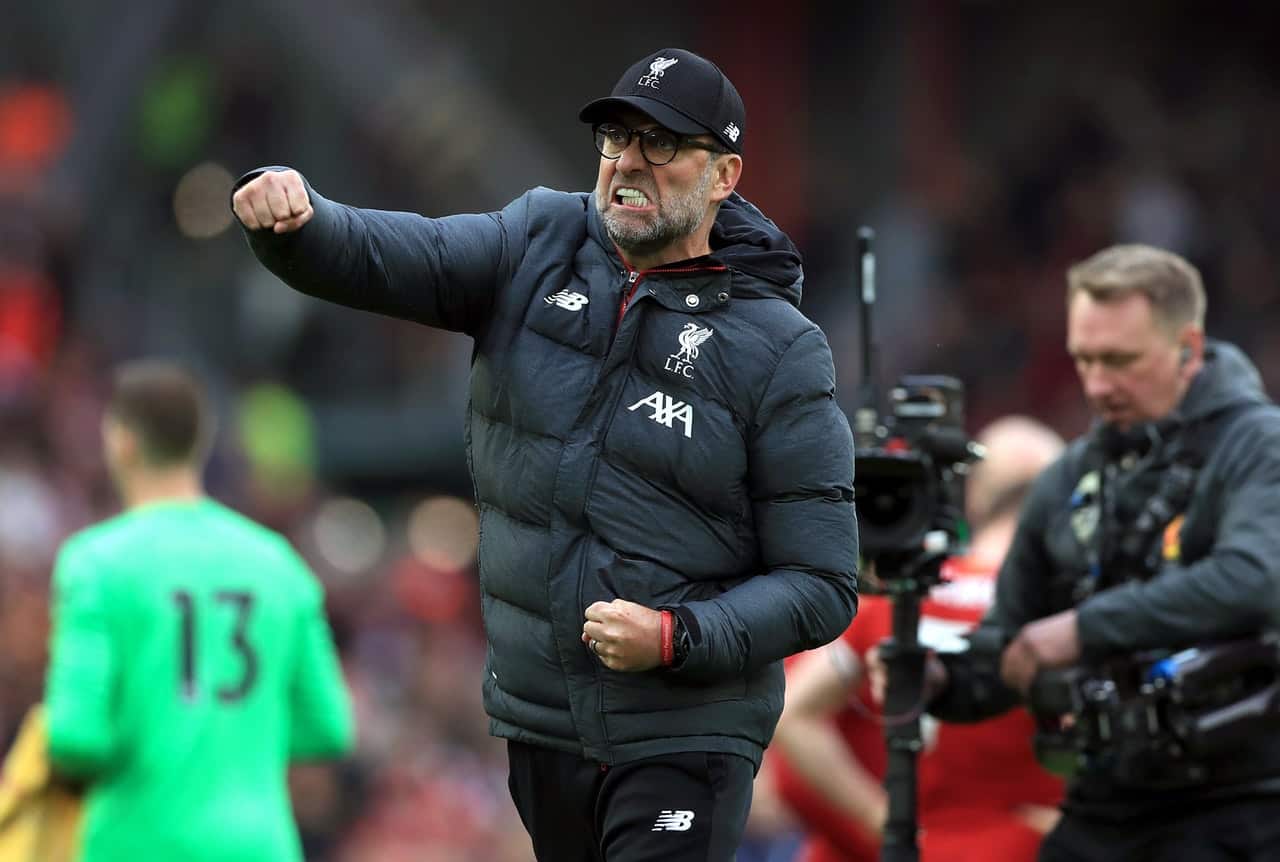 Liverpool manager Jurgen Klopp praised his players’ reaction and regretted his own on the touchline after they came from behind to beat Bournemouth 2-1 and leave his side three wins from a first title in 30 years.

Goals from Mohamed Salah and Sadio Mane turned things around after Callum Wilson’s controversial opener for the visitors as the runaway leaders set a new record of 22 successive top-flight home wins.

Wilson’s goal came after he had appeared to push Joe Gomez off the ball in the build-up and such was Klopp’s frustration a foul was not given he celebrated wildly at assistant referee Dan Cook when Salah’s equaliser went in – actions he immediately regretted afterwards.

“I was in good spirits, let me say it like this,” he said.

“Yes, that happened. Would I do it now? No, but in the moment I just don’t understand how it could be a goal.

“This shows the problem of VAR still exists. It is a human being. I am not sure, does anyone in the room think it was not a foul?

“The touch was enough to let Joe struggle, they score a goal in the next situations. How is it possible someone sits there and doesn’t see it?

“Mike Dean (fourth official) I am sure saw it is a foul but it is not his job any more. VAR hides behind the phrase ‘clear and obvious’.

“Nobody felt comfortable after that so I celebrated a bit in that direction (of the assistant referee) but not I was happy about it and didn’t say anything.

“But I was absolutely happy about the result, the three points and the performance because I knew it would be tricky for different reasons.

“I think the decisions of the ref around the goals made it even more tricky for us, obviously.

“We wanted to fight back before the game and after that we had to fight back. How we played after being 1-0 down was exceptional, to be honest.

“I don’t want to make it too big but in a moment when you have to fight back for the momentum and then you get a decision like that and a goal like this, there are other teams in the history of football which would then slip.

“The boys’ reaction today, I loved – I really loved.”

The victory, which took Liverpool 25 points clear with second-placed Manchester City facing a Manchester derby at Old Trafford on Sunday, was the perfect morale boost ahead of Wednesday’s crucial Champions League last-16 second leg at home to Atletico Madrid. Liverpool have to overcome a 1-0 deficit in that match, after three defeats in four matches.

There was more good news with captain Jordan Henderson set to return to training after a hamstring injury and Andy Robertson set to come back into the side after being rested.

“It should be possible. Robbo shouldn’t be a problem. Hendo was out I don’t know exactly how long but I think he will train tomorrow. That looks good,” Klopp added.

A ninth defeat in 10 away games and a run of just three victories in 18 league matches leaves Bournemouth mired in 18th and in real danger of relegation.

“I thought we performed really well. I can’t be critical of too much of what we did,” said Cherries manager Eddie Howe.

“We knew we would have limited possession. It was a case of how well we defended.

“I thought our defensive shape was really good. What cost us the game was two moments in our half where we turned the ball over too easily.”