The hassle, the acting and the all-consuming nature of management was not the post-career path Jamie Carragher wanted to dive into.

Liverpool’s former No. 23 played 737 games for the Reds and etched his name into the club’s record books on more than one occasion.

Carragher’s illustrious career, leadership qualities and expert understanding of the game led many to tip him for a role in management when he hung up his boots in 2013.

And while it was on the cards early on in his career, as he moved closer to retirement the lure of occupying a different seat in the dugout had dissipated and he was not “prepared to let management take over” his life.

A career in punditry would instead await and in a podcast with Sky Sports, Carragher opened up on his thought process in forgoing management in a time where many of those he played with and against opted in.

“Ten or 15 years ago, my first thought when it came to entering management was probably ‘hassle’,” he explained. “I used to look at it and think, ‘is it worth everything that you go through?’. 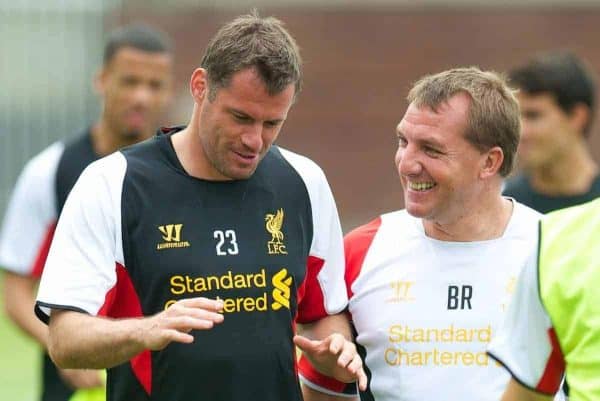 “I always remember Gerard Houllier saying to a group of players that in management you were lucky if you have 10 moments where you look back on and think ‘wow’.

“It’s very difficult to have those moments as a manager and there’s just so much hassle and stress along the way. You’re just waiting for that moment at the end of a season – maybe a trophy or a promotion, whatever it may be.

“A lot of time for managers, it doesn’t come.”

While acknowledging that the fear of failure would drive him on, at a potential cost outside of the footballing world, for Carragher the ‘acting’ required for the job would not come naturally.

“There are a lot of things that we don’t see when it comes to management,” he added.

“There’s an act with managers, and rightly so: press conferences, speaking to players and I don’t think they’re themselves that often.

“They’ve got to play the actor all the time, and that must be really difficult; speaking to players and trying to get them onside, possibly those you don’t rate or don’t like, trying to get an agent onside to sign a player you don’t particularly like – there’s a constant need to put on this act.

“I’m just not sure I’d have been cut out for that. I don’t really like people acting to me or being like that myself.

“I’m very straight with people, and I feel managers have to be like that, tell players sometimes what they want to hear rather than the truth.

“And I’m not sure I’d be as cut out for management as many people think I would be. It’s probably best I stayed away from it.”

Carragher’s insight into his thought process and those of former players making the step into management is intriguing and certainly worth viewing in its entirety, even if it’s just for his customary dig at Gary Neville’s time at Valencia.