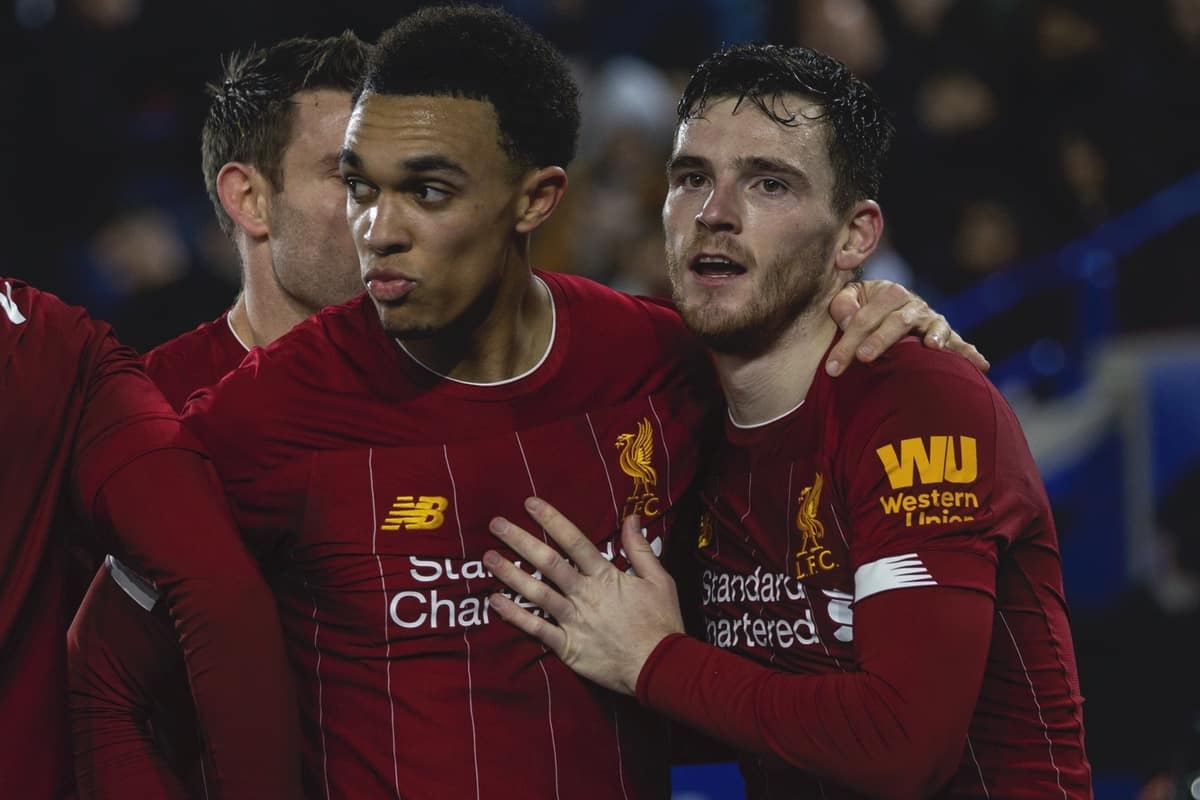 Liverpool have released a compilation of every assist Trent Alexander-Arnold and Andy Robertson have made in the Premier League so far, as a reminder of their brilliance.

Between them, Trent and Robbo have supplied 49 goals for the Reds in the English top flight, with the right-back contributing 26 and the left-back just three fewer.

It is not often a Liverpool win is not decorated with a key contribution from Jurgen Klopp‘s full-backs, with the manager building his system around the pair as two of his main creative outlets.

The Reds have become a formidable force with Trent and Robbo driving down the flanks, with their connection on and off the pitch allowing them to flourish.

With Trent just 21 and Robbo only 26, they will hopefully remain a part of the starting side at Anfield for years to come, and there is a very real prospect of the duo improving further.

Liverpool have been providing throwback content on their Instagram of late, and here are five things we noticed rewatching every league assist from the pair.

The most eye-catching aspect of Robbo’s first run of assists was the connection he forged with Sadio Mane down the left, with a prominent feature of the Scot’s game being the run in behind, latching onto a through ball and drilling it across the six-yard area.

Six of Robbo’s 23 league assists for Liverpool have been for Mane, with only one player benefiting more…

…that player is, of course, Mohamed Salah, who has turned home seven goals from Robbo deliveries—and he clearly cherishes playing alongside Klopp’s wide men.

Trent has also laid on five assists for the Egyptian King, including some brilliant finishes.

The No. 66 became the youngest player to record three assists in one Premier League game when he teed up Mane (twice) and Virgil van Dijk in the 5-0 win over Watford in February 2019.

He technically followed up that feat in a virtuoso display at Leicester on Boxing Day—though winning penalty may not count as an official assist—with his ability to dominate a game remarkable for a player so young.

Interestingly, Trent had only laid on five goals in 44 league games—including 36 starts—prior to his first hat-trick of assists, with that then followed by six in the final 10 league games on 2018/19.

Part of the magic of the Trent-Robbo tandem is the variety of their play, with the pair complementing each other with two very different approaches out wide.

While Trent is widely lauded for his delivery, with comparisons to both David Beckham and Kevin De Bruyne, Robbo blends a superb crossing ability with a dogged persistence.

His driving runs through defences have led to assists against the likes of Leicester, Newcastle and West Ham, and the Kop has latched onto his never-say-die attitude.

On a basic level, rewatching Trent and Robbo’s assists proves how fortunate Liverpool are to be able to call upon two of world football’s best full-backs at the same time.

Often in the past the Reds have had one standout at either right-back or left-back, with a more serviceable option on the other side, but now Klopp has the luxury of two world-class options on the flanks.

And long may it continue.