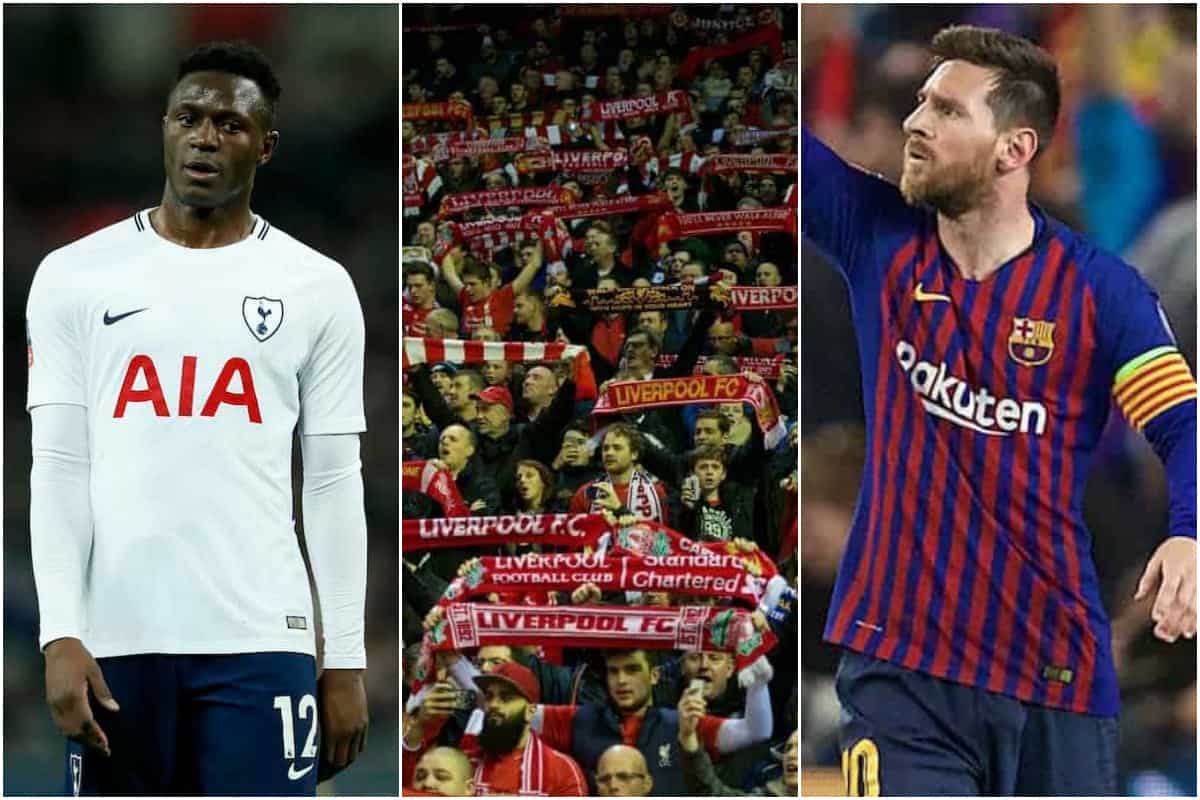 We’ve come to the end of our week-long series looking at opposition teams and the big occasions they have come up with against Liverpool—so what have the fans made of it all?

Liverpool might be the team we support, follow and want to win, but without opponents we’ve got nothing: nobody to beat, nobody to encourage a rivalry with, nobody to buy and sell players with.

It’s worth remembering, particularly at a time like this when barely anybody has access to the live sport they love.

All week we’ve recalled the finest displays and moments, at Anfield and away:

Since then, the comments have been rolling in from This Is Anfield readers, remembering the incredible strikes they were there to witness or other great games which might have been lost to memory.

We also ran a vote on the best goals to be scored against the Reds, culminating with our home and away winners.

For the best Anfield strike, we split the goals into categories—hits from miles out, team goals, solo efforts and so on—and ended with four groups, with fans selecting their favourite from each to progress to the final vote. 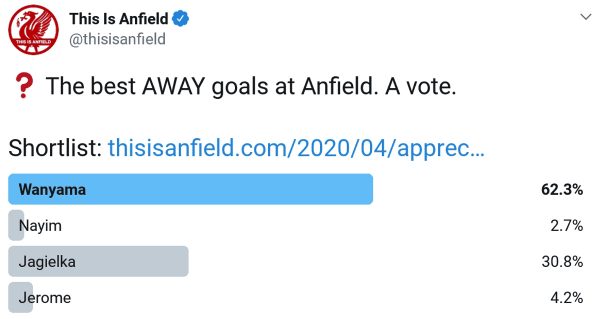 Even within these initial polls there was an element of uncertainty as to who would win, with some rightly pointing out how good they were on their own merit.

Being at the game makes certain strikes more memorable for some, with a particular angle potentially making these tremendous hits even more incredible.

Was in the upper Anfield road end for wanyamas, draw just dropped couldn’t believe it

Jagielka because how the hell a centre half scored that I’ll never know.

Edman's was crazy, he was absolutely fucking miles out. Actually let out a bit of a laugh when he decided to shoot, which didn't last too long.

TIA user FB19 commented how Damian Duff might have been included for a “brilliantly worked” goal for Blackburn, while London Red offered Glenn Hoddle’s early ’80s effort for Spurs as an alternative.

On Facebook, though, the clear favourite was Spurs midfielder Victor Wanyama and his tremendous top-corner strike.

Adam McAllister said the goal “was ludicrous; I was trying to be furious but it was a hell of a shot.”

Andy Brown said the Tottenham man “couldn’t have hit it any better” and Evans Okuku labelled it a “screamer.”

As such, it’s perhaps no surprise that the Kenyan won the final vote by a bit of a landslide: Victor Wanyama claimed over half the total votes, seeing off the slaloming run by Eden Hazard, the long-range wonder goal by Spurs left-back Erik Edman and a derby-day strike from Graeme Sharp.

Away from Anfield, the same process was taken: four initial groups, with the winner progressing to the final.

Some of these polls producing intriguing results—Gareth Bale’s spectacular Champions League winner lost out in the same poll as Goal of the Season winner Justin Fashanu—while others perhaps contained an element of recency bias, with Hernan Crespo’s 2005 final finish easily seeing off far older strikes by Southampton and Everton players. 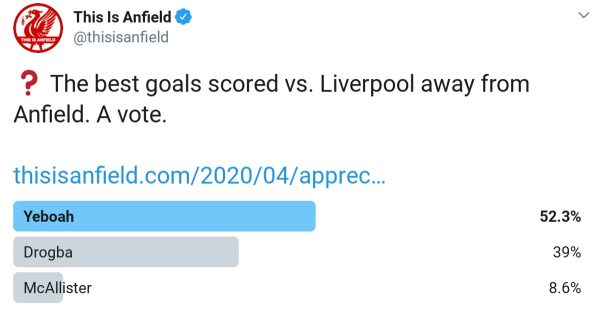 Other goals suggested which could have been included were an effort from Ray Wilkins past Bruce Grobbelaar, courtesy of KloppiteE in the TIA comments section, while a couple of fans also mentioned goals scored in superb team performances against the Reds—more on that shortly.

Into the final, it was a far more close-run event than the Anfield poll—with Leeds icon Tony Yeboah and his astonishing Premier League volley just pipped at the post by Leo Messi‘s Camp Nou free-kick, which flew past Alisson into the top corner just about a year ago. 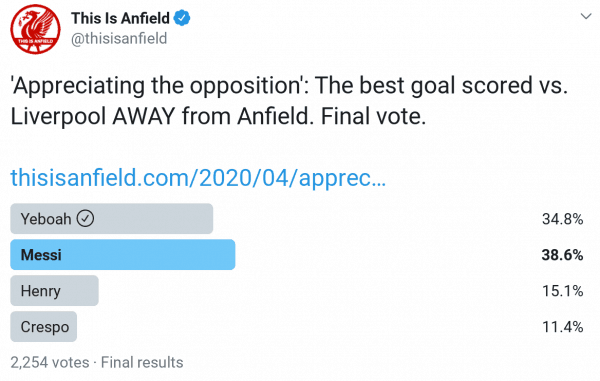 Of course, that preceded one of Liverpool’s most famous-ever comebacks, so perhaps that also went into some fans’ thinking!

It got to be Henry at Highbury. We lost 4-2. We were 2-0 up at half time. I'll never forget that game. It game me nightmares against Arsenal. It's probably why I still enjoy beating Arsenal any time. I'm sure Carra is having nightmares too ?

That turn by Kaka on Gerrard. Then the perfect defence splitting pass from his own half, finished with the cheekiest dink from Crespo. Then you know the rest…

Obviously alot of kids too young to remember Yeboah goal.

Those were the goals which stood out most—but what about the performances?

Our selection of incredible team displays at Anfield encapsulated every type of standout sides, from giant-killing, lower-league teams to the very best of the European giants who came to Anfield and taught the Reds a lesson.

In addition, TIA commenter FB 19 recalled how a John Hartson-inspired Celtic team came to Anfield in the UEFA Cup and “turned us over,” while OGSG8 Black Mamba paid tribute to the rock-solid Chelsea spine in the mid-to-late 2000s which caused the Reds problems: “Cech, Terry, Lampard, Drogba—killer.” 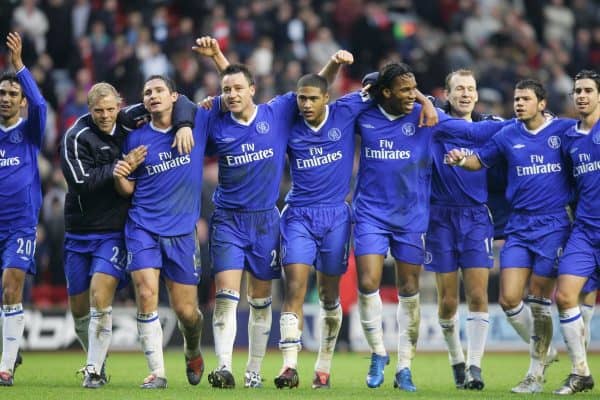 On Twitter, @GaryMac03 brilliantly remembered another European side the Reds couldn’t live with: “Missing Celta Vigo in ’98 this, [Aleksandr] Mostovoi and [Valeri] Karpin taking the absolute p*ss out of us!”

In terms of individual performances, the notable additions to our selection were Fabrizio Ravanelli’s debut hat-trick for Middlesbrough, again thanks to FB 19, while several individual standouts from our “team performances” were highlighted: Pablo Aimar for Valencia, Cristiano Ronaldo for Real Madrid and Michael Essien from Chelsea‘s Anfield triumph.

That concludes our week-long look at the best Liverpool have faced; leave us your longest-lasting memories of the top goals and games you’ve seen or been at in the comments section!