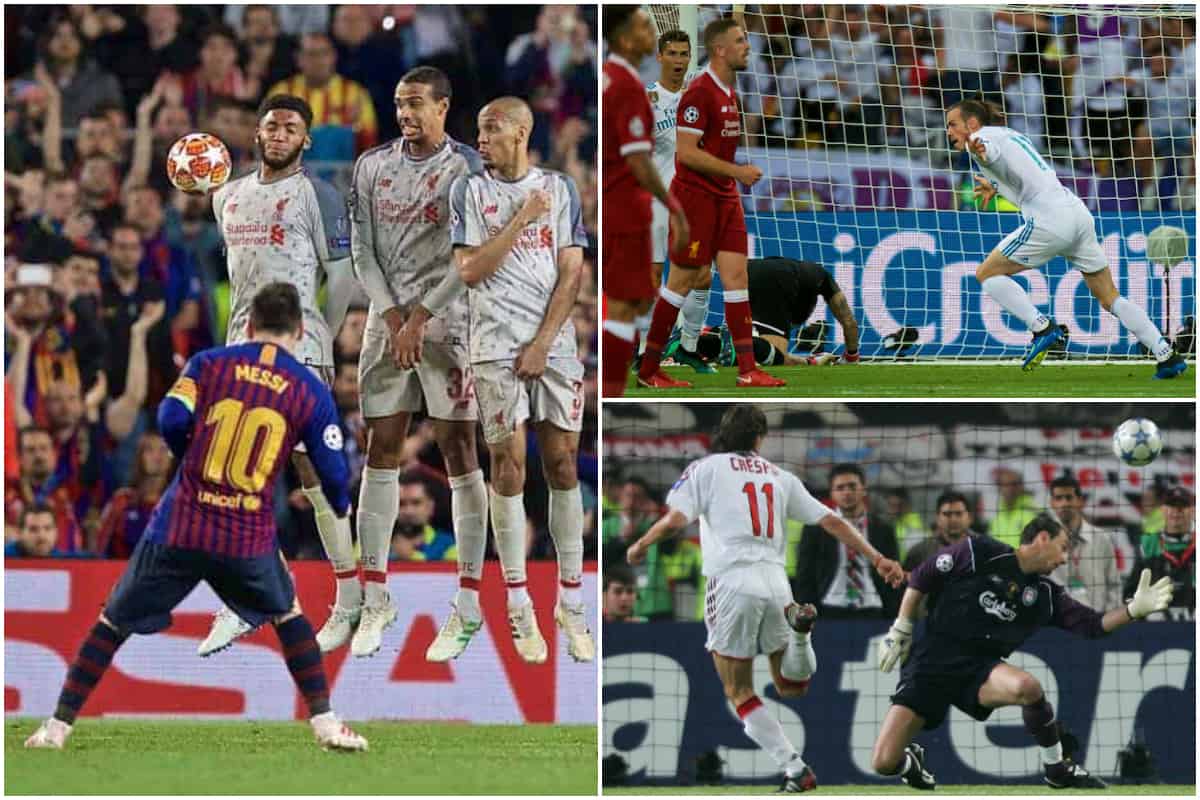 Ok, part two of the crackers against Liverpool: here are the best of the goals scored against the Reds away from home.

This is the second part of a mini-series looking at how Liverpool fans can, and do, appreciate the quality in front of them even when it’s not from those in Red.

In this instalment of our series, we’re looking at the stonkers, smashes and superb teams goals scored against the mighty Reds away from Anfield.

That means not just on-the-road league games, but all our cup exertions, neutral venues and European away days are considered, leading to a huge range to select from.

The case in part one was that a few names scored the goal of their lives at Anfield, or even their only goal of the season; this time around there’s a more familiar grouping of star forwards, spectacular strikers and generally regular names on the scoresheet.

We’ve picked our best ten again, plus a few extras who almost made the cut. 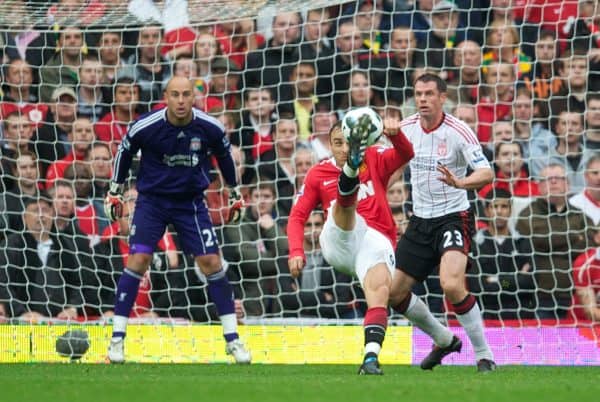 Gary McAllister – Leeds United – Years and years before he became a Red, Gary Mac sent a thunderbolt volley into the top corner at Elland Road.

Alex – Chelsea – This one just missed out in a straight fight with another missile free-kick, as the Brazilian sent a piledriver in during a Champions League classic.

Andy King – Everton – All the way back in 1978, King made it a derby day to remember with an arrowed half-volley from outside the box.

Dimitar Berbatov – Manchester United – As far as becoming a Man United hero goes, Berba took the easy route, didn’t he? A hat-trick against Liverpool including an overhead kick. Pah.

One of the most iconic goals of the Premier League era—along with another by the same player against Wimbledon.

The Leeds front-man had an absolute hammer of a right boot and used it to tremendous effect against Roy Evans’ men, smashing an unstoppable long-range volley in off the bar past David James.

If you were a kid in the 90s, you attempted to replicate this goal many, many times over.

So difficult to defend against, Drogba showed all his best traits in this goal: strength, control, unstoppable shooting.

Considering the effort was taken with his ‘weaker’ foot, and the fact Jamie Carragher had defended him close enough to prevent any kind of a turn with the first touch, the power and finesse behind this goal was utterly awesome.

Less than 10 minutes remained on the clock at the Camp Nou in this recent fixture, when the world’s greatest-ever player pinged a free-kick into Alisson‘s top corner from miles out.

It clocked up 600 strikes in the colours of Barcelona for the No. 10 and put his team 3-0 up in the first leg of the Champions League semi-final.

You know what came next!

Got our pick of Henry goals really, haven’t we? More on some of those later in the week.

His best individual strike against the Reds was this one at Highbury, a weaving, wandering, wonderful solo piece of magic.

Another corker from the Champions League and this one was altogether more heartbreaking than Messi’s turned out to be.

Bale came off the bench in Kyiv to score twice and seal the trophy for his team, with the match-winning goal being this incredible overhead kick.

No keeper was saving that, let alone Loris Karius with a head injury.

One from the record books, here. Liverpool went to many weird and wonderful places in the 90s on their European adventures, mainly as we were in the UEFA Cup more often than not against less-than-stellar names.

Italian side Genoa isn’t the most low-key outfit we faced, far from it, but we’ve still only come across them on this single occasion in ’92.

Brazilian left-back Branco unleashed a harpoon past Mike Hooper near the end of the first leg and that was pretty much the end of the fourth-round tie. They beat us at Anfield too and, Italia ’90 fans, Tomas Skuhravy was another key part of this team.

Remember when Leicester won the league? Good times. Not for the rest of the big clubs, mind, who were largely abysmal and could have sealed a title themselves had they had any semblance of consistency.

A big part of the Foxes’ armoury was the Mahrez-Vardy tie-up in attack…and they combined to brilliant, pinpoint, long-distance effect here.

One pass down the channel, one audacious long-range lob, one embarrassed Liverpool defence of Sakho, Lovren and Mignolet.

Time to turn back the pages even more and a quite spectacular team goal scored by Saints.

Keepy-uppies, lobbed passes, precision touches and a thunderous finish—even the great Reds team of the 80s couldn’t keep this move at bay.

And a big windmill arm celebration to boot!

This article should come with an age rating purely on account of this goal.

Istanbul, 2005, all of that conjures up some heavenly memories for Reds, but we had to go through hell to get to them.

Pick of the bunch was an unbelievable turn and exquisite through-pass from Kaka, finished off by the most nonchalant, instinctive, inch-perfect flick finish from Crespo. All of it, pure filth.

And last on our list, an absolute must-have—the goal of the season winner back in ’80.

Norwich turned on the style at Carrow Road with a sweeping, passing move, which ended in a piece of skill and perfection that the likes of Henry, Suarez or Messi would have been proud of.

Fashanu flicked the ball up, turned past a defender in the same movement and sent a dipping, bending volley right into the far top corner, an out-of-this-world moment which deserves respect, acclaim and applause.

Even if you were supporting the away side!