Liverpool would finish the campaign as comfortable champions if the Premier League opt for UEFA’s “sporting merit” method, with minor changes in the rest of the table.

UEFA announced on Thursday its desire for member nations to ensure a conclusion to the current campaign, effectively ruling out a ‘null and void’ resolution.

The governing body urged leagues to explore all options, with an emphasis on “sporting merit” to decide European qualification, if the remaining fixtures cannot be played.

In turn, the method clubs opt for—be that a mini tournament, play-offs or points per game (PP)—would impact the crowning of champions and the issue of promotion and relegation.

According to the Telegraph, the Premier League clubs “regard points per game as the fairest method,” averaging their current points total over their games played so far.

Liverpool have taken 82 points from their 29 games—with Jurgen Klopp‘s side just six points off the title if the season is played out as expected—which would average at 2.82 points per game.

This would see them finish 0.79 points above Man City in second, and a full point above Leicester in third: 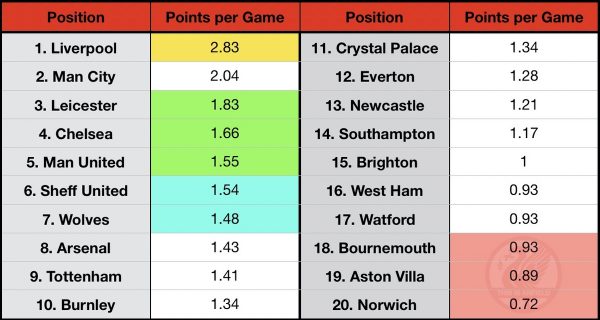 There would be changes to the current table if a PPG method is used, with Sheffield United leapfrogging Wolves into sixth, while Arsenal and Tottenham would switch places into eighth and ninth respectively.

The rest of the table should remain the same, with Bournemouth, Aston Villa and Norwich dropping down into the Championship.

Villa and Bournemouth‘s placings could present legal issues, however, as the former have played a game fewer and the latter would finish with the same PPG as West Ham and Watford.

Second place would usually ensure qualification to next season’s Champions League, but with City banned for two years by UEFA and yet to successfully appeal the decision with CAS, Leicester, Chelsea and Man United would take the other three spots. 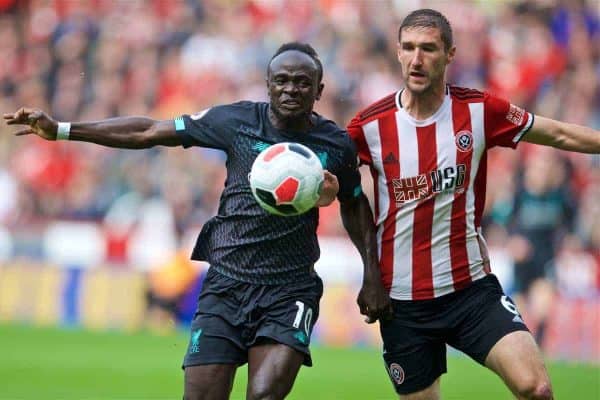 This would mean Sheffield United and Wolves would enter the Europa League, with the prospect of the FA Cup being voided potentially handing Arsenal a route into Europe’s second-tier tournament.

Of course, this eventuality is not the preferred avenue for the Premier League, and instead games should still be played behind closed doors later this summer.

Clubs are expected back in training in mid-May, with fixtures to be played from June and over a condensed period to end in July, with Liverpool’s first game back likely to be the Merseyside derby at Goodison Park.