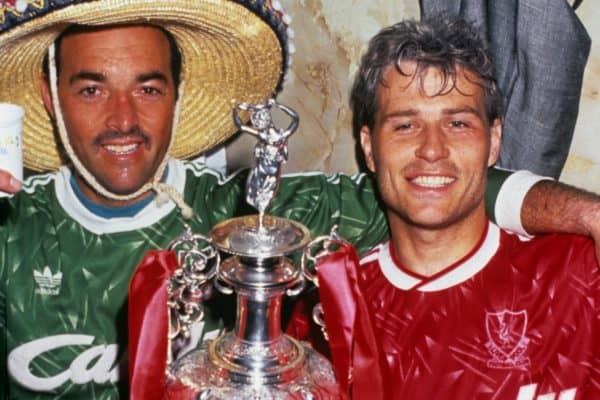 When Liverpool last won the First Division title in 1990, there was little fear of not doing so again for another 30 years, but now Anfield craves that “sensational” feeling.

Kenny Dalglish‘s side of 1989/90 was not, by Ian Rush’s admission, “the greatest team in Liverpool’s history.”

“But we worked as a team,” the legendary striker told This Is Anfield, as he reflected on the club’s most recent title win, 30 years ago.

“That’s the difference, there were no individuals; we worked hard as a team.

“If you look at individuals, most wouldn’t be as good as the team today.

“But as a team—it wasn’t 11, it was that dressing room, there were 20 or 21 of us—we all worked together, we all went that extra yard to help each other. That makes a big difference.”

But they lined up alongside less-decorated names such as Barry Venison, David Burrows, Steve Staunton, Gary Ablett and Gary Gillespie, with Dalglish presiding over the club’s transition from a successful 1980s into a new decade.

There was no expectation from the Kop that this would be the last top-flight title Liverpool secured in three decades, of course, as club statistician and lifelong supporter Ged Rea explains.

“It felt as if that was something we achieved every single year, so I think we took it for granted,” Rea told This Is Anfield.

“The best part of the campaign was always the final game of the season, or when the trophy was presented.

“‘We are the champions’ blasting away on the PA system, the players running around the outside of the pitch with the trophy. That was always the best part.

“It was never a case of ‘could we win it?’, it was always a case of ‘when will we win it?’—and that sounds slightly arrogant, but it’s not meant to be, because there was always that feeling that we would do it.

“We were never worried about the opposition, it was just a process to get to the end.

“Certainly I didn’t think it would be 30 years. I remember saying to somebody—very, very misplaced as it turned out—that we could stop playing for 100 years and Manchester United would never achieve what we’ve achieved.”

Since goals from Rush and Barnes sealed the trophy that day on April 28, 1990, with a 2-1 win over QPR, United have won the trophy 13 times, to eclipse Liverpool’s record of 18 titles with a total of 20.

A feeling of familiarity on the Kop that day, of a support almost expecting to win trophies every season, is being restored, and journalist John Keith believes it will be “very different” when the next title is won.

“They’ve won European Cups since then, they’ve won other trophies, but I do think that the league title is what Liverpool fans and Liverpool Football Club are all about,” Keith told This Is Anfield.

“But of course, football is a strange beast and other teams come along, clubs get money and they get new investors, and things change.

“So it will be very different. That team, great as it was with Alan Hansen and Grobbelaar etc., lost five games that season, so it shows you exactly what a fantastic team this has been for Liverpool under Klopp, it’s just been remarkable.”

It will be a remarkable achievement, regardless of the circumstances, and would introduce a whole new generation of supporters to the “sensational” feeling of winning the title.

“The next time it happens, because it will happen, I wouldn’t be too bothered about it happening for me,” Rea continued.

“But I would just love the young generation of Liverpool fans to experience what I felt as a teenager, or in my early 20s. Because the feeling of doing it is just sensational.”

Liverpool have enjoyed success since 1990, of course—there have been incredible highs and devastating lows over the past 30 years—but the pinnacle is undoubtedly the league title.

On the anniversary of the club’s triumph in the First Division, the magnitude of such an accolade cannot be overlooked.