Discussions over a restart to Premier League action are ongoing—but the landscape of a match might look very different in a month or two compared to pre-coronavirus postponements.

The Reds haven’t played a top-flight domestic game since 7 March, when they beat Bournemouth 2-1 at Anfield.

Since then the ensuing suspension of league play has left the club waiting to finally secure the league title, which Liverpool need just two more wins to achieve.

However, public health concerns and the many different factors needed to align for sport of any kind to resume in 2020 means that much is still undecided about how, and when, elite-level football will be seen again.

Now a new report in the Telegraph suggests that some of the decisions which must be made, and suggestions which have been put forward, means it could be a completely different spectacle which finishes the 2019/20 season compared to that which began it.

Of course, players, fans and everyone else has already come to terms with the fact matches will be played without fans, in empty stadiums and quite possibly on neutral venues, but there’s much more which could yet be changed. 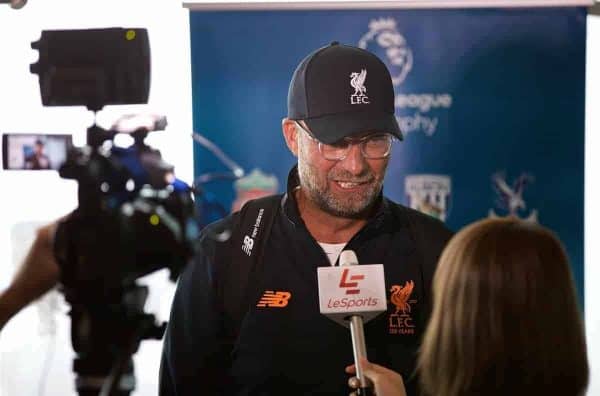 While getting matches back is key to maintaining competition integrity—not to mention bringing a bit of normal life to millions of fans—there are financial and legal obligations which make a restart attractive and necessary.

Sky and BT Sport have a large majority on screened games, but part of the appeal for those who pay to watch matches is the atmosphere, which will of course be missing.

As such, and to avoid those companies demanding to pay less out for broadcast rights, the Premier League are planning a range of added value content ideas which will be presented to clubs.

Options include speaking with players as they leave the pitch for half time, giving officials microphones to hear their decisions and, in return, bringing up the possibility of terrestrial channels covering the 45 games not currently scheduled to be on one of the two subscription channels.

While not all suggestions might pan out in the end—or be carried forward into the new campaign if they don’t prove an initial success—it’s becoming ever-more clear that we will be watching a different ‘product’ take shape when our sport returns to our screens.

It may be many more months yet before fans are allowed back inside stadiums, and in the meantime, it’s in clubs’ and leagues’ best interests to get a plan in place for matches to take place as quickly as possible, always within the parameters of health and safety for all involved being of the utmost importance.