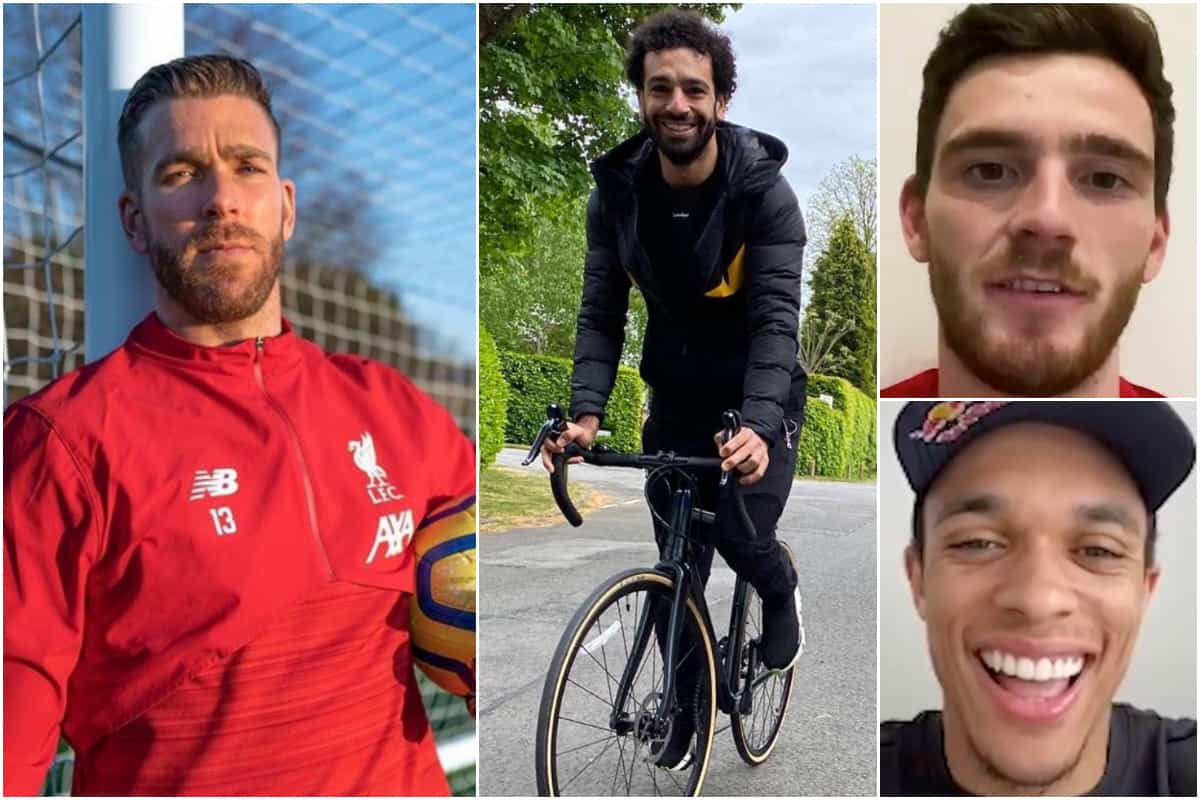 Trent Alexander-Arnold and Andy Robertson have paid tribute to local fans for their efforts in the coronavirus pandemic, ahead of Liverpool’s return to training.

The Reds are set to report back for group sessions on Wednesday, with the club awaiting the final results of testing held at Melwood on Monday morning.

Jordan Henderson and Virgil van Dijk were among those pictured entering the training ground on Tuesday, but this was to undergo individual work as has been the case over the past two weeks.

Groups of five will be able to train together after the 20 Premier League clubs unanimously passed a vote to begin phase one of the government’s return-to-play protocols, ahead of the anticipated restart of fixtures in June.

While the players have been in lockdown, they have provided significant support to the community in terms of charity endeavours, including donations to foodbanks.

Robertson has been one of those most regularly praised for his contribution both in Liverpool and back in Scotland, and the left-back served as the perfect figurehead to thank volunteers for their continued work in a vital scheme:

?? @andrewrobertso5 details the incredible work being done by foodbanks in around the city of Liverpool.

Massive thank you to everyone who has donated to the emergency foodbank appeal so far. As always, your support is much appreciated ?https://t.co/uqy5sRdQRw pic.twitter.com/EZZ7bkgpb9

As part of work with Spirit of Shankly, Tony Cavener has been delivering food packages to the most vulnerable in the Merseyside area, despite being at-risk himself due to asthma.

To show gratitude for his selfless acts, Trent surprised Tony with a video call:

Fair play to Tony who is doing heroic work. Great chatting with him. ?????? pic.twitter.com/KOgqUJEWZU

Trent told him: “From the club as a whole, to you and the people that are doing it, and the frontline workers and everyone who’s putting their own health and safety at risk to help others, we can only say thank you. So, Tony, thank you.”

This week is Mental Health Awareness Week, and Robbo was joined by Adrian and loanee Herbie Kane to raise awareness and urge those suffering to seek help:

“Some of the most comforting words in the universe are ‘me too’. That moment when you find out that your struggle is also someone else’s struggle, that you’re not alone, and that others have been down the same road. Don’t be afraid to open your heart “ ?? #MentalHealthAwareness #YNWA @liverpoolfc @premierleague

Please, never suffer in silence. Speak up and seek help. No matter how you're feeling you must realise you're not alone. @lockdown.tactics are doing some amazing work raising awareness for such an important social issue #MentalHealthWeek

I’m celebrating #MentalHealthAwarenessWeek with @bristolmind . This year’s theme is kindness to others and to yourself. I take care of my mental health by getting out and staying active. I set myself a challenge to mix it up. #KindnessMatters #MHAW2020

Elsewhere, the likes of Trent, Robbo, Henderson and Gini Wijnaldum have shared their eagerness to return to training over the past week, with Ki-Jana Hoever posting a throwback photo from his days at Ajax:

Hold the vision, trust the process! Looking forward to being back ??? #tb

Mohamed Salah has been keeping up his fitness work in lockdown by cycling around his neighbourhood, as he revealed on Instagram:

And finally, James Milner admitted he “can’t pull off the Alisson Becker” as he claimed his hair is now “at the longest state its ever been in my life”:

Think you’re having a bad hair day? This is one of the reasons I hate video calls ? ?????? #alissondoesnthavethistrouble See @liverpoolfc for the full list ??

When the Reds are pictured back at Melwood, many will be looking much different to when they last set foot on the pitch, with Milner not alone in letting his hair grow out while he has been unable to visit the barbers!