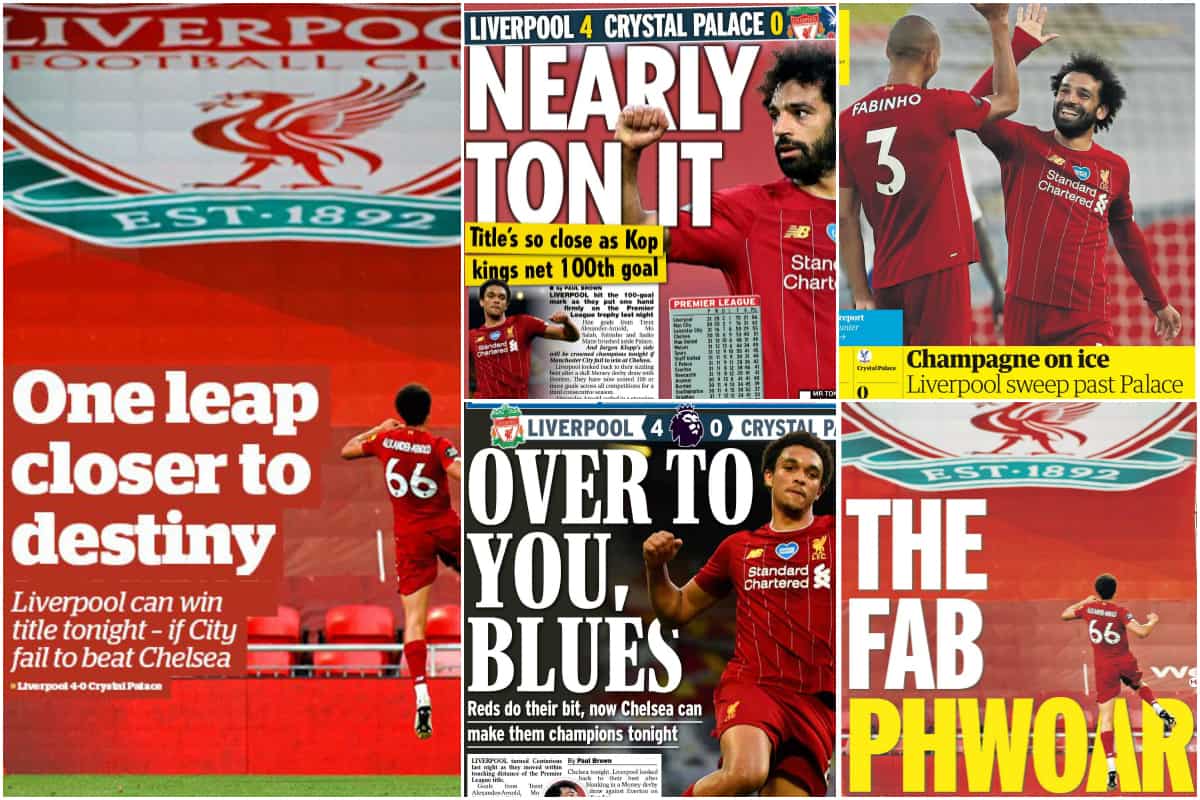 The media assessed Liverpool’s 4-0 rout of Crystal Palace as a “dream” victory and worthy of being the one which secures the Premier League title.

Back at Anfield, the Reds were back to top form, ruthlessly disposing of Palace to move to the brink of title glory.

A totally dominant and slick display was capped off with four superbly taken goals, as Liverpool put on a show and played with the swagger of champions.

Klopp will be delighted with the win, and especially the performance, and the long wait for the Premier League trophy is so nearly over with just two more points required – or if Man City fail to beat Chelsea on Thursday night.

All eyes will be on that Stamford Bridge clash, but before that, here’s all the key analysis from the media on the resounding win.

That comes after a performance that was so perfect it may as well have been a dream.

The Guardian’s Andy Hunter wrote that victory showcased “the best of this season’s undisputed champions”:

Liverpool now stand on the cusp of their first league title for 30 years after a victory that captured the best of this season’s undisputed champions.

The Telegraph’s Chris Bascombe assessed the display as Liverpool’s best at Anfield this season, and one worthy of securing the title, as of course it will if Man City fail to beat Chelsea:

This was as comprehensive a victory as Klopp’s side have enjoyed all season, a manifestation of everything great and good which built up such a formidable points advantage.

How appropriate it will be if this is the performance that ends the wait.

Meanwhile, the Mail’s Dominic King explained that Klopp’s Reds will go down alongside the very best in Anfield history for the sheer dominance produced en route to winning the title:

Who – other than diehards – remembers when, where or how the all-conquering Liverpool teams of 1978-79 or 1987-88 became champions?

All that is recalled about them is they turned the title race into a procession. The class of 2019-20 have done the same. That’s why they will go down in history.

The Mirror’s Sam Meade was struck by how effortlessly Klopp’s team demolished the Premier League’s in-form side, who had won four matches on the bounce prior to arriving at Anfield:

Before their trip to Anfield the Eagles were the only team in the Premier League to have won their last four games. In their return at Bournemouth Palace looked very impressive, but they barely forced Alisson into a single save.

Much has been made of the gulf between the league’s top two, despite City’s dip this season, and the rest. Liverpool did nothing to dispel that notion with an utterly dominant display at Anfield.

Melissa Reddy, of the Independent, was in awe of the way Liverpool retained such hunger and focus throughout the full 90 minutes, despite practically having the game – and the title – won:

They covered every inch of the pitch like champions, with their passion to own the ball matched by effective flamboyance on it.

Liverpool did not cease their offensive intentions nor their defensive diligence after the interval.

The Mail’s Martin Samuel praised the Reds for rediscovering top form and hitting their stride so quickly after the restart:

That results feels a lifetime ago, yet before and after lockdown, Liverpool’s qualities remain.

Merseyside derbies are attritional and very rarely flatter even the best side, and that was the case on Sunday, but here were Liverpool back in the saddle and performing at a level that may yet add up to the most complete title win in history. 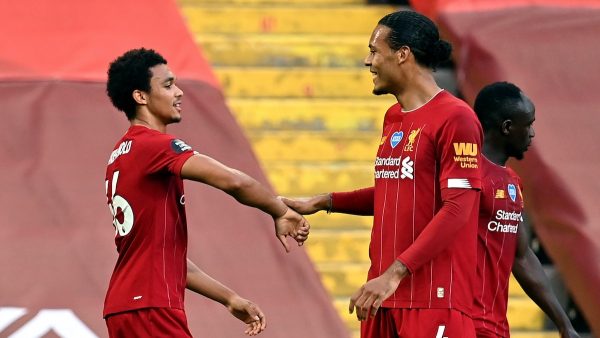 Following that, the Liverpool Echo’s Ian Doyle praised Klopp’s men for responding to the flat outing at Goodison Park with such an emphatic performance:

This was, quite simply, the stuff of champions.

This, though, was a true collective effort, every part of the machine purring at optimum level, arguably Liverpool’s best home display of the season.

And Doyle lauded the quality of each goal and explained the variety of each strike showcased why the Reds have been able to dominate so heavily this season:

But there is a reason why Liverpool are an astonishing 23 points clear at the summit, this a frankly bewildering 28th win in in 31 top-flight games this season.

Every goal was worthy of a Premier League winner, showcasing the various ways in which the Reds have simply proven too much for the rest of the division.

Elsewhere, the Mirror’s David Maddock waxed-lyrical on how Liverpool have turned Anfield into a fortress, and assessed that this has provided the catalyst for the Reds’ rise to becoming champions:

Since a Palace victory here in April 2017, Jurgen Klopp’s titans have not been at this famous old stadium since in the league – a run of 56 games.

The restoration of Joe Gomez alongside Virgil van Dijk, thus restoring the best centre-back pairing, was key to the triumph, in the view of Standard Sport’s David Lynch:

We may never know why Klopp chose to pair Joel Matip with Virgil van Dijk for his side’s first game back. But the injury suffered by the former during that visit to Everton and Joe Gomez’s performance this evening make it reasonable to question the call.

The Englishman has everything you need to be a world-class centre-half and isn’t far from such levels of acclaim at the age of 23.

The vastly improved performance upon Mohamed Salah’s reintroduction to the team showed just how influential the Egyptian is, in the view of Meade:

The Egyptian, for all his goals, does find himself questioned more often than his two attacking colleagues.

The Reds have only dropped points in three games this term and Salah was absent for two of those. His pace and willingness to stretch defences is certainly a major asset and, although his finishing is perhaps the most frequently criticised part of his game, the composure he showed to slot home was excellent.

And Lynch thought Andy Robertson’s importance was highlighted by Liverpool’s vastly improved attacking form, but also reiterated that it shows why a suitable back-up option is required:

Robertson’s role in this team is akin to that of a Premier League winger in the 90s – get up and down, help out defensively, and get dangerous crosses in. And the Reds tend to struggle without him because they do not have a replacement who possesses that same skillset, even if James Milner is no slouch.

But the same cannot be said for the left and so, if a coronavirus-impacted budget allows, that area must be addressed this summer.

The BBC’s Phil McNulty loved Fabinho’s dominating midfield performance and praised the Brazilian for being the un-sung hero of this team:

The languid midfield man is the complete operator and showed all sides of his game in what turned into a stroll.

He ran midfield while demonstrating his class as a creator and goalscorer to simply underline the role he has played in Liverpool’s romp to the Premier League this season.

Lynch picked Trent Alexander-Arnold as the star man and believes the right-back should be nailed on for the season’s young player of the year award:

Stifled somewhat at Goodison Park on Sunday, the West Derby-born defender was back in the habit of running games from right-back this evening.

It beggars belief that he is still just 21 years old – it would be an utter travesty were anyone to pip him to this season’s young player awards.

Finally, Meade was impressed with Neco Williams’ cameo and saw signs of how Liverpool could develop in the future, with the Welshman’s emergence potentially allowing Trent to move inside:

Much has been made about whether he will transition into a midfielder later in his career such is his ability on the ball. And the presence of youngster Neco Williams may give Klopp food for thought.

The German bought the 19-year-old on and he has, along with Curtis Jones, probably been the most impressive of Liverpool’s current crop of youngsters. Alexander-Arnold continues to get better and better, which is a frightening prospect, but don’t bet your hat on him always operating from the right.